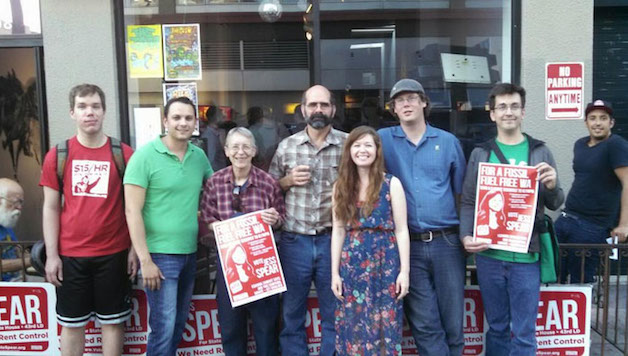 Every one of you should be proud of what we accomplished in our primary election campaign.  In the first count of votes on election night we had won 19% against the most powerful legislator in the state, and as the late votes are counted we will likely end up with over 20%.  In fact so far Jess has received 22.16% of the late votes, with more to be counted.

We did so while accepting no corporate money, with only 2 months to build, and against a 20-year incumbent backed to the hilt by big business and the political establishment. We convinced 1/5 of Seattle primary voters to cast a conscious vote for a socialist, for rent control, for ending corporate welfare, and for a fossil-fuel free Washington.

Our campaign boldly set the agenda for the primary and forced Frank Chopp to respond point-by-point, including an agreement that the state ban on rent control should be lifted. We will continue to do so in the general election, and we’ll demand that his promises on the campaign trail (and behind closed doors to unions and other progressives to secure their endorsements despite widespread disquiet within their ranks) be reflected by action in Olympia.

We’ve started a growing debate about rent control and other real solutions to Seattle’s affordable housing crisis.  At last Thursday’s protest against the oil trains we drew attention to the reckless endangerment they represent to Seattle and our environment. As a direct result of our action the city acknowledged it had no emergency response plan and began putting one together.

As with the movement that won the $15 minimum wage, this again demonstrates that direct action, and building grassroots movements is far more powerful than Chopp’s all too familiar approach of backroom negotiations and insider deals.  In protesting the oil trains we called for a larger protest in Seattle on September 21st, in solidarity with the largest ever climate change protest in New York City, which now has a growing list of endorsers including the Green Party, Divest UW and 350.org.

At our primary election night party Jess announced she will step up the fight for affordable housing and rent control by launching #RentersRiseUp.  We invite Seattle residents to share their stories of rent increases and join with other renters fed up with the skyrocketing housing costs.

Join us as we move forward to the general election with already 170 campaign volunteers and growing.

What Does the Primary Result Mean?

If you read only the mainstream media, you would think support for an alternative to corporate politics is “ebbing.”  The Stranger suggested 19% represents that anger at the status quo and the base of support for left wing and socialist candidates is waning.  This is rather curious considering Kshama Sawant only got 11% of the vote against Chopp in 2012 (with their endorsement) and this year Spear won 20% with no major endorsements.  They go on to say the results also indicate that Frank Chopp successfully convinced 80% of Seattle primary voters that the responsibility for decaying social conditions lies solely with the Republicans and not at all with him (as Speaker of the House).

This is completely false and is a fundamental misreading of the political climate.

Our campaign volunteers, who have been in daily discussions with working people, know well that anger, frustration, and deep resentment at the political establishment is growing.  The day-to-day problems facing working people in this state (and around the country) has not substantially changed – the recovery remains primarily a recover for the 1%. The rest of us still face skyrocketing housing costs, a prevalence of low wage jobs, underfunded schools, cuts to social services, and record levels of student debt.

As pointed out by Goldy, our campaign received the 2nd highest vote of any challenger in a Seattle legislative race. This was in spite of the full weight of the establishment being thrown behind Frank Chopp as he ran his most serious campaign since the 1990s.

The Seattle Times acknowledged this in their brief coverage of the results – “Frank Chopp pushed back hard against socialist challenger Jess Spear.”  The Chopp campaign, heavily financed by corporations, spent over $60,000 in primary, sending 3 mailers and cashing in every chip at his disposal to demand unions, environmental and other progressive organizations endorse him.

The promotion of Chopp by The Stranger, the “Progressive Voter Guide,” unions, environmental organizations, etc. gave him credibility as a progressive, particularly to the majority of unengaged voters. They are not innocent by-standers, but have a critical role to play in educating voters about the reality of Chopp’s pro-business record and supporting those who are fighting for ordinary people.

Over 170 people signed up to volunteer for our campaign.  We raised $38,000 from ordinary working people who want to see a working-class political alternative to the Democratic Party establishment.  With volunteers doorknocking, postering, talking to folks on the street, and mailer to 30,000 voters, our campaign was able to win thousands of votes by informing voters, not misleading them about who and what we represent.

Interpreting the results as reflective of the public’s sentiment is also limited by the low turnout.  Only 22,000 people had registered their approval or disapproval of Frank Chopp by election night.  This is only 26% of registered voters.  The vast majority – over 70,000 – did not vote or have not had their ballots yet counted.  The primary electorate, and in particular those that vote early, are disproportionately the most party-loyal and economically privileged parts of society.  In contrast, the most downtrodden, poor, young and struggling sections of the population do not typically vote in the primary election, or at all.

In fact, the strategy Frank Chopp employed in his campaign contradicts the prevailing analysis of the public mood on rent control, affordable housing, and ending corporate welfare.  One of the visible impacts of our campaign was on Chopp’s own political material. His mailer and advertisements proclaim Chopp a community organizer, an activist fighting to close corporate loopholes, for progressive taxes, for more affordable housing, and as an advocate for working people.  Frank Chopp hopes to confuse voters by painting himself as an activist just like Jess Spear.

Chopp understands that the voters in the 43rd district want a representative willing to fight for the interests of working people, and adopted the strategy of recasting himself in the mold of his opponent. Nowhere in his campaign material did he ask for people’s votes on the basis of giving Boeing $9 billion, presiding over a dysfunctional and regressive tax system, or being supported by big oil and big coal.

Frank Chopp and the political establishment recognize the threat represented by the Jess Spear campaign and by Socialist Alternative. The announcement that ACLU lawyer Alison Holcomb is likely to run against Kshama Sawant in 2015 is another signal the political establishment is beginning to fight back in earnest. They recognize that the 2014 election is not only about securing Chopp’s seat.  It’s also to cut across the challenge Socialist Alternative presents to their hold on power in Seattle.

Leadership is not about echoing popular opinion.  It’s about campaigning on an issue, raising the confidence and awareness of ordinary people, and building a movement.  That’s how we won $15, that’s how real gains for women’s rights, civil rights, LGBTQ rights, and environmental protections have come about.

At the election night party, 100 people came out to watch the results with us.  We raised another $7,900 and signed up more volunteers excited to elect Seattle’s second socialist. A worker at the Vermillion was so inspired he donated $200!

Over the next 3 months our campaign will continue to build support for rent control, taxing the rich to fund social services, for a fossil-fuel free Washington, and ending corporate welfare.  We will continue building an alternative to corporate politics and the struggle for a just, equitable, and sustainable world – a socialist world.  But we can’t do it without you, your energy, commitment and financial support.

Join our campaign to challenge the stranglehold of corporate interests over the needs of working people in Washington State.  Let’s send a message to Olympia that giving $9 billion to Boeing while our schools are criminally underfunded doesn’t come without a political price.