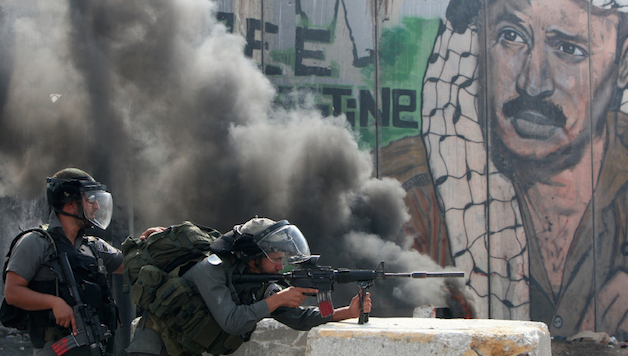 Over 260 Palestinians have been killed in the current war – the overwhelming majority civilians. Two Israelis have also lost their lives. The destruction raining down on the Gaza strip, carried out by the huge US-backed military machine of the Israeli government, is completely disproportionate to the threat faced by homemade rockets fired from Gaza.

Israeli Prime Minister Netanyahu claims that the war is necessary to guarantee Israelis safety. In reality, this ground invasion will do nothing to make Israelis safer. It is at the expense of many lives, such as the tragic killing of four children playing on a beach. Homes of those accused of killing Israelis have been targeted and destroyed, leaving survivors to search for the dead amongst the rubble. Meanwhile, no such action has been taken against the families of far-right Israeli activists charged with killing Mohammad Abu-Khdeir.

Unfortunately, the rockets fired into Israel and the attempted attack on Sufa, within Israel’s current border, have threatened lives and given Israel the excuse it needed to justify a ground invasion of the Gaza strip. These tactics are counter-productive, and will not further the cause of an independent Palestinian state.

This conflict, and the ongoing vicious oppression of Palestinians, is rooted in the western quest for domination throughout the Middle East. It is intractable under the present capitalist system, which places profit over people.

The spark that ignited this present conflict is the collapse of US-backed peace talks in April, and the formation of a new Palestinian government supported by both main political parties, Hamas and Fatah. Israel had attempted to hold back demands for Palestinian statehood by playing off one party against another; the threat of a united government is the main threat the Israeli government is fighting.

Netanyahu’s government has a policy of expanding into Palestinian areas by supporting new settlements and driving Palestinians off their land. It has no interest in working for a real peace, and for a genuinely independent Palestine. The US, led by Obama, fully backs the right-wing Israeli government as a steady partner in an oil-rich region wracked with war and instability.

There are glimpses of how to overcome the situation. Joint protests of Jews and Arabs in Israel has shown the potential for working-class people uniting for an end to the conflict. The recent protests of Arabs within Israel were the largest for a number of years. A recent poll showed that the majority of Palestinians supported demonstrations and mass action over rocket attacks, as the way to win an independent Palestine. The Arab Spring showed what is possible when working people stand up for themselves this way.

In 2011, Israel saw a mass movement for public investment in housing, and other social services, which showed the potential for class divisions to open up in Israeli society. The struggle for peace, work and housing can only be won by mass struggle; kicking out the vested interests of the western governments, of big business, and of the right wing parties in Israel and Palestine.

We stand in solidarity with the people of Gaza and Palestine at this time of vicious repression. This onslaught will achieve nothing but a mounting death toll. We call for an immediate withdrawal of Israeli troops from the Gaza strip.

This carnage we are witnessing would not have been possible without US taxpayers’ dollars, and Obama and Kerry’s support. They are attempting to defend the indefensible. We call for an end to all US funding for the Israeli war machine.

Protests are taking place around the world today, including within Israel. We will work to build an international mass movement against war and terror, and an end to this system of exploitation and oppression.

Download a pdf version of this material here for use at rallies and protests.