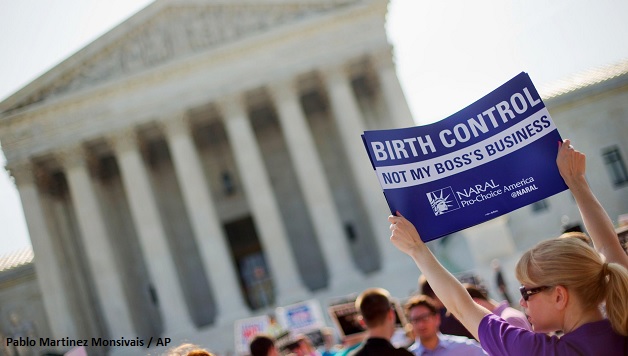 In the past week, the Supreme Court of the United States (SCOTUS) presided over three historic setbacks for reproductive health care access as well as weakening home health care union organization, an industry largely made up of women. The rulings are misrepresented as issues of religious freedom and freedom of speech, but give cover to the far right bigotry that has aimed to scale back women’s rights for decades. The immediate and devastating consequences for millions of women will reinforce sexist ideas and economic inequality.

First, the ‘Buffer Zone’ ruling struck down a Massachusetts law requiring protesters at abortion clinics to stay 30 feet away from the entrance to protect women entering the clinics. This law was put in place after violence and harassment of women at abortion clinics became so intolerable that public outcry forced the state to intervene. Days later, the Supreme Court’s ‘Hobby Lobby’ ruling determined that employers do not have to provide female employees with insurance that covers contraception if the employer’s religious beliefs oppose contraception.

Trade union strength of what the Supreme Court called “partial public employees”, especially home health-care workers, was attacked under the premise of free speech, implementing a de facto right to work approach in this field of public sector workers.

The aspects of freedom supposedly highlighted within the rulings are rooted in bigotry, as other arenas of public life such as political conventions and trade summits still implement Free Speech Zones to hold back protest. Similar protections as the Buffer Zone ruling are not given to almost any other groups, such as political protesters or religious minorities.

If the Supreme Court really believed that religious conviction should exempt people from having to pay towards anything they found morally repugnant, then, as my Quaker friend said, “maybe I can get a refund on my tax contributions that have been spent on things that are against my faith- the Iraq war, for starts.” Unless the Supreme Court orders the federal government to exempt Quakers from taxes to fund war and Muslims from taxes that subsidize pork, we can safely say that they’re not terribly concerned with religious people’s moral objections to how their money gets used.

When you take this hypocrisy into account it becomes clear that these decisions are not about First Amendment rights. These rulings are sweeping attacks on women’s rights that deepen economic inequality. Pregnancies and reproductive health problems commonly result in women losing their jobs, being denied raises, or being unable to enter the workforce at all, and consequently are a huge factor contributing to the gender wage gap.

As Ruth Bader Ginsburg, Associate Justice of the Supreme Court, in her minority statement put it: “It bears note in this regard that the cost of an IUD [intrauterine device, a small contraceptive device] is nearly equivalent to a month’s full-time pay for workers earning the minimum wage.” This ruling further divides women along class lines by making birth control an economic burden for low-income women while having little to no effect on high-income women. Having legal access to birth control- or any form of healthcare- is meaningless if you can’t afford it. For decades, the women’s movement has focused too heavily on legal equality, an approach which has been criticized from within the movement for ignoring the obstacles faced by low-income women and women of color.

Inequality and bigotry have been on the rise in the US since the start of the economic recession, as demonstrated by an unprecedented number of reproductive rights restrictions and offenses against immigrants of color in this period. At the same time, The Supreme Court rulings have captured mass outrage, and come just on the heels of #YesAllWomen which raised consciousness on the need for fightback against sexism.

Capitalism breeds this level of inequality and exploitation – we experience it every day as women, as workers, as people of color, as immigrants, as people with disabilities, as members of the LGBTQI community. Successful attacks on women’s rights only strengthen attacks on other oppressed groups, which is why the strength of the women’s movement depends on uniting on a class basis and taking on the fighting tactics that won us reproductive and economic rights in the first place- mass organizing, civil disobedience, strikes, and boycotts!

Labor organizations, women’s organizations, and the broader left should organize a mass force to fight these historic attacks on reproductive rights. The Supreme Court rulings demonstrate the urgent need for movements to take on a fighting strategy to capture the anger of millions and organize against inequality.

From Texas to the Supreme Court: Abortion Rights Under Attack

Why Britney Spears’ Struggle Gets An Echo