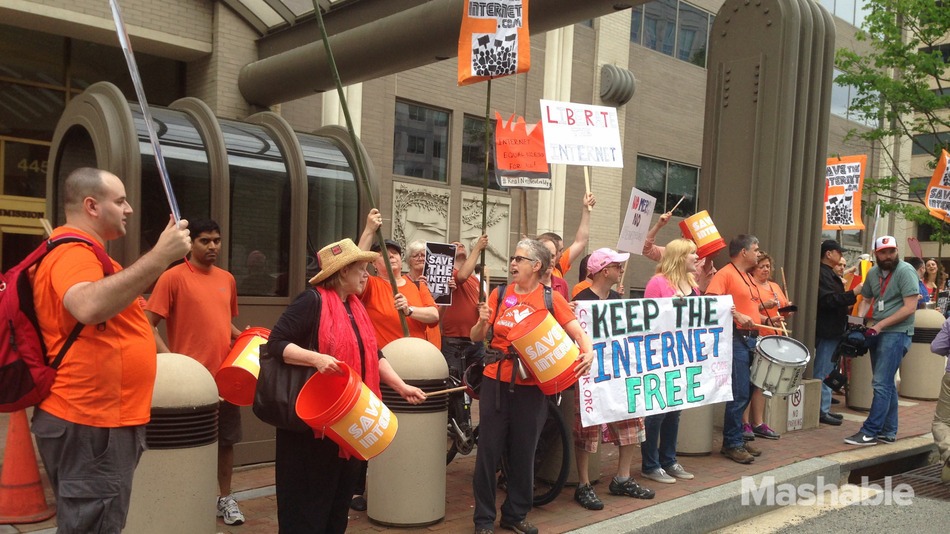 We assume that everyone online – from political bloggers to big businesses to people posting videos of their cats – will reach their audiences roughly the same way as everyone else. This is the principle of net neutrality. New regulations proposed by the Federal Communications Commission (FCC) will undermine net neutrality – to be replaced by outright net discrimination, with profound consequences for online freedom of speech.

These new regulations come after a successful lawsuit from the cable company Verizon. Tom Wheeler, newly appointed chair of the FCC, was formerly a top lobbyist for the cable and wireless industry. Wheeler’s new regulations formally entitle broadband providers to discriminate in what information they allow across their networks. This represents a serious attack, further paving the way to a two-tier Internet.

In 2007 Obama publicly claimed to be a “strong supporter of net neutrality” and warned that without it we’d get “much better quality from the Fox News site and you’d be getting rotten service from the mom and pop sites.” But now he’s allowing such a scenario, revealing further the president’s hypocrisy.

What is Net Neutrality?

Net neutrality is the principle that governments and businesses should treat all data on the internet equally, not discriminating or charging differentially by user, content, site, etc. It is an important safeguard to protect free speech on the Internet.

The internet is often portrayed as inherently prone to freedom. But the functioning of the internet is dependent on a vast physical network that transfers information from place to place, and the architecture of that network can have a major impact on what goes across. The most blatant violation of net neutrality is the so-called “Great Firewall of China”, where the Chinese state uses the architecture of the internet to directly censor criticism of the government.

Without net neutrality, the broadband companies are empowered to determine what information does and doesn’t go across the network. For example, in Canada in 2005, members of the Telecommunications Workers Union were locked out by their employer, Telus, a large phone company and ISP. During the course of the lockout Telus blocked access to several pro-union websites from any Telus customers’ internet connections. Without the basic net neutrality protections, we can expect to see incidents like this appearing a lot more frequently, especially where struggle breaks out.

But perhaps more frequent than outright censorship will be consigning websites to oblivion, through the creation of a two-speed internet. The main “right” that Verizon was demanding in its lawsuit was to divide online traffic into a “fast lane” for those who can afford to pay, while those who can’t would be stuck in a “slow lane”. Such an arrangement would disproportionately undermine individuals and others who cannot pay.

During the course of the dispute, a number of digital companies have come out in defense of net neutrality. An open letter signed by Google, Microsoft, eBay, Facebook and others argued that the proposed changes represent a “grave threat to the internet”. Netflix has come into a number of public conflicts with Comcast and AT&T over the issue, even going so far as to put anti-Verizon messages on Netflix buffering screens. This has given the impression that these companies are “good” capitalists, defending the underdog.

However, it would be a mistake to think that Netflix, Google, Microsoft, etc are acting out of altruism. This is in reality a battle between those capitalists who provide content for the web and those who provide infrastructure.

Companies like AT&T, Verizon, and Comcast specialize in the physical network of cables that make the internet work. Requiring that network to be neutral is a direct threat to their profitability. Companies like Netflix, Google, and eBay, on the other hand, specialize in the actual content that gets transmitted across those cables. Their profits depend on their ability to easily get information across the internet with as little difficulty as possible.

While content-providing companies may oppose the FCC changes, they also act to undermine online freedom of expression. While Google promotes itself as a do-gooder, from 2006-2010 they operated a Chinese version of their search engine, Google.cn, which self-censored websites that were offensive to the Chinese state. When they pulled out of China in 2010, it was only after a series of cyber-attacks against their servers. Other search engines such as Yahoo! still operate censored versions of their services in China.

Different sectors of the capitalist class often find themselves in conflict with one another, but in the last analysis they have the same class interests. Capitalism naturally tends toward monopoly. In the field of communication that monopoly often takes the form of “vertical integration” between different sectors of the economy. As online shopping sites start their own warehouses, search engines start their own line of smart phones, and movie-streaming sites start filming their own shows, the common class interests of the different sectors of the economy become clearer. In 2010 Google and Verizon formed a partnership and Google significantly watered down its net neutrality policy to be more agreeable to both parties.

The attack on net neutrality is an attack on internet freedom. But this does not mean that net neutrality is a guarantee of internet freedom. A single law regulating one sector of the economy can’t stand up against the entire capitalist system. In their dispute with Netflix, Verizon and Comcast deliberately lowered the speed of their internet connections to pressure Netflix into signing a deal. Moreover, the deal they ultimately made was over a private network, placing it outside the domain of any net neutrality legislation.

Columbia professor Tim Wu, who coined the term “net neutrality”, admitted that he never accounted for these issues in defining the term. He saw net neutrality, not as a political problem, but as “solving a joint technical challenge” to make the internet work as well as possible. But solving a joint technical challenge is far more suited to a planned economy then a system where big businesses are competing to maximize profit. As long as the internet is run by capitalists, internet freedom will be continuously under attack.