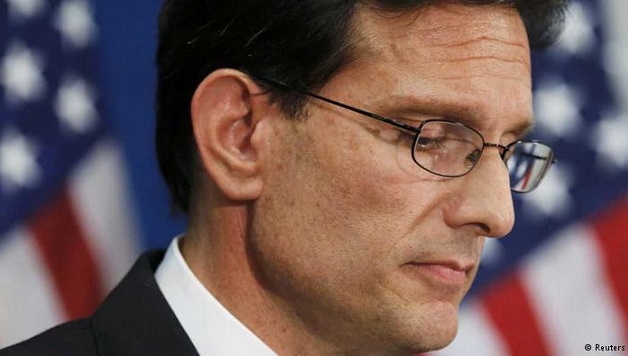 Help us build a working-class, left alternative to the two parties of big business

A political earthquake shook the ground beneath the Democratic and Republican Party establishment last Tuesday when Republican House Majority Leader Eric Cantor was stunningly defeated by an unknown economics professor, Dave Brat. The swift takedown of business-backed Cantor revealed the alienation of ordinary people from the political establishment. Brat even used a certain anti-capitalist rhetoric to attack the former House Majority Leader. However, he linked his attacks on the corporate political establishment to anti-immigrant propaganda and his populist Tea Party-style agenda. For progressives and workers on the left, Cantor’s defeat shows both the potential for real grassroots campaigns to connect with working people on bread and butter economic issues and also the threat that the right-wing Tea Party libertarians pose to working-class rights – if the left fails to build a viable alternative.

This election cycle has already seen the fall of one out-of-touch corporate politician. We want many more to follow Cantor into retirement, but let’s make sure to replace them with pro-worker candidates from the left, not anti-worker representatives from the right.

In the first hours and days after Brat defeated Cantor, the corporate media was saying it was Brat’s anti-immigrant stance that attracted voters. Others were saying it was because Cantor was considered too liberal, not conservative enough for his district voters.

Though Brat’s immigration ideas were prominent in his campaign and he painted himself as more conservative than Cantor, at its core, this defeat was about kicking out a corporate politician that was too close to Wall Street who practiced “crony capitalism” as Brat put it.

Even on the issue of immigration, Brat’s opposition to reform was focused on exposing corporations’ desire for low-wage labor: “Eric Cantor doesn’t represent you; he represents large corporations seeking a never-ending supply of cheap foreign labor” (The Nation, 6/11/2014).

Dave Brat won because his anti-establishment message connected with working people’s discontent with politics as usual: “I am running against Cantor because he does not represent the citizens of the 7th District, but rather large corporations seeking insider deals, crony bailouts, and a constant supply of low-wage workers.” The Brat campaign also reached out to Democratic voters (who are allowed to vote in the Republican Primaries under Virginia law) “asking them to go to the polls to get rid of Eric Cantor.”

People are Fed Up

Brat’s defeat of Cantor is a sign of the changing political situation, as was the victory of Socialist Alternative City Council candidate Kshama Sawant last year in Seattle. Working people across the political spectrum are simply fed up with the status quo – the soaring cost of living, record-breaking student debt, painful cuts to social services, and five years of a sluggish economic recovery producing mostly low-wage jobs. Ordinary people are fed up with candidates who pay lip service to working people during election time but serve the interests of big business once elected.

Cantor’s loss also shows that out-fundraising your opponent does not guarantee victory. Cantor raised $5.5 million in contrast to Brat’s $200,000, and Cantor spent around $1 million in the final week. Nonetheless, Brat’s populist message of challenging the out-of-touch politicians energized working people in Virginia and helped build a grassroots base that dominated GOP events.

Brat’s rise on the political scene is also a warning to progressives, labor and those who want to see genuine political representation for ordinary Americans. If the left fails to offer a political alternative to the two big-business parties, right-wing populists like Dave Brat, Ron Paul, and Rand Paul, who offer no real economic solutions to rising income inequality, lack of jobs, and the all-sided social crisis, will step into the growing political vacuum. Help us build Socialist Alternative and a new mass political party representing working-class families in the U.S.

Washington State’s politics are broken. As a Socialist Alternative candidate, I am challenging Olympia’s Speaker of the House, Frank Chopp, who oversaw $10 billion in cuts to social services while handing Boeing the largest corporate tax break in U.S. History, $8.7 billion. Removing another out-of-touch corporate politician would not only rock the political establishment for the second time this year (after the election of Kshama Sawant), it would give working people the confidence to build a strong movement aimed at stopping the corporate driven race to the bottom.

Electing the second socialist in two years, on a bold pro-worker, pro-environment platform, would also generate a serious discussion about building a new political party for the 99% that represents the interests of people, not corporations.

As the Organizing Director of 15 Now, I helped lead the struggle to win the historic $15/hour minimum wage victory in Seattle. I am also a climate scientist and a dedicated social justice activist. With your help, we can kick out another out-of-touch corporate politician! Donate today at VoteSpear.org – and sign up to follow the campaign’s ongoing events in this exciting race.