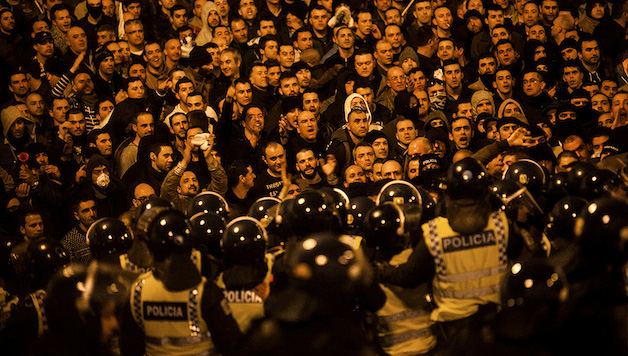 Reflection of the government’s intrinsic weakness For some time now, the Portuguese “security forces” have been agitated. The austerity policy imposed by the troika and the neoliberal conviction of the right-wing PSD-PP government, with the approval of the President, led to severe budget cuts in spending on the security forces, along with deep cuts to salaries and various allowances affecting most public employees in Portugal.

In November last year, a joint demonstration of the Public Security Police (PSP), Republican National Guard (GNR), Maritime Police, Prison Guards, Judicial Police and other security forces stormed the steps in front the Parliament breaking through a police barrier that normally separates San Benedict square and the Parliament building. This demo was followed by the resignation of the National Chief of Police. On 6 March, a new demonstration of the security forces, called by the Coordination Committee of Trade Unions of the Security Forces, gathered 15,000 agents. But this time the government mobilized 3,000 PSP and GNR to confront them, a display never seen in 40 years of bourgeois democracy. The government showed signs of great fear, having on the day before the demo, increased the police’s uniform allowance from €300 to €600 in a clear but failed attempt to disband the demonstration.

A member of Socialismo Revolucionario (CWI in Portugal) who accompanied the demonstration attested to the huge uprising that is brewing within these “forces of order”. The protesters chanted “Resignation, resignation” (demanding the resignation of the government) but also “Invasion Invasion”. Some of the radical Left reported about a possible penetration of the demo by the far right. However, all we could see was a small group of fascists – some of them police officers – which tried to stir up the protest but were isolated by the bulk of the protesters.

This is not to say that, in the absence of a strong combative response by the workers’ movement, the extreme right could not begin to win some support, as is taking place in other European countries.

Beyond a few barriers knocked over and some pushing, there was noticeable tension among the riot police present. Despite ordering the demonstrators to disperse, no attack was made on them. The government seems to have feared a bloodbath or, worse for them, an act of disobedience by the riot police on duty.

About 1 week later, it was the turn of the military to protest. As in Portugal soldiers do not have trade union rights, the demonstration of about 5,000 people was mainly joined by army reservists and military families. But it does not cease to be significant for this reason, particularly in a year when we celebrate the military coup of April 25, 1974 which opened the doors to the Portuguese Revolution of 74-75.

While it is true that the nature of the Portuguese Armed Forces today is different to 1974 – today there is a professionalised army whereas then, military conscription imposed by the fascist regime forced soldiers into colonial wars in Guinea-Bissau, Angola and Mozambique. It is nonetheless significant that high levels of discontent are again being seen among the security forces.

Why is this relevant?

For socialists and Marxists the most important thing about this episode of class struggle in Portugal is that it is the very core of the state –the professional bodies have the monopoly of violence in defence of the ruling classes – which are entering into a process of breaking with the government.

Unfortunately, opportunistic and “legalistic” attitudes to this question are widespread among the workers’ movement which can serve to disarm the mass of workers of a real understanding of the nature of the “forces of order”. This is partially due to the relative calm of the class struggle in Portugal since the 80s, following the counter-revolution which began on 25 November 1975.

Socialists defend trade union and workers’ rights for members of the security forces. However, they also explain that their current repressive role can only be neutralized by militant mass action of the workers’ and popular movement. We must oppose the ultra-leftism of anarchists and others whose crude positions concentrate exclusively on their hatred of police officers, but also those – such as the leaders of the main parliamentary left parties – who propagate the utopian and idealised vision that the police exist as mere “defenders of the people”.

Pittsburgh’s Fight For Community Control Over the Police