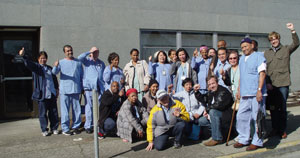 This statement is from the office of Socialist Alternative Seattle City Councilmember Kshama Sawant.  It is about their work with custodians at Harborview Medical Center who had been experiencing discrimination and harassment from their managers. For more background, check out our previous post that contains the letter we sent last month urging Harborview to end the harassment, and this Seattle Times article.

Tuesday night the courageous stand by Harborview custodians paid off when they signed an agreement with Harborview’s upper management resolving several concerns. Previously the mainly immigrant custodians had complained of suffering discrimination and harassment from their managers, and had been denied a $1/hour Infection Control Premium pay raise for failing an English test. Rather than suffering silently, however, the custodians heroically organized themselves to stand up for their rights. As part of this process, 40 of them met with my office so that we could coordinate and help publicize their concerns (see the Seattle Times article here).

I would like to thank Harborview for responding promptly and entering into negotiations with the union, WFSE 1488. I would also like to extend thanks to the WFSE organizers and shop stewards for all their organizing efforts and for representing the workers. And finally, I would like to give a big thank you to the Coalition of Refugee and Immigrant Communities for tirelessly advocating for not only these custodians, but all immigrants and refugees, and special thanks to Mehret Tekle for her leadership in organizing the events that brought about this success.

Here is a list of what the custodians won: This is an overwhelming success for the custodians, and my office will remain vigilant in making sure that the agreements are carried out. We will ensure that the 38 workers who have not yet passed the test are retrained, and that there is a thorough investigation into the allegations of discrimination.

This victory is further proof that workers do not have to silently suffer abuses in their workplace and shows that collective organizing pays off. If workers in other Seattle workplaces are facing issues of discrimination, harassment, or other injustices, I urge them to contact my office so we can support them in whatever way possible. I also urge all workers to empower themselves by coming together in unions and in mass movements like the fight for a $15/hour minimum wage.