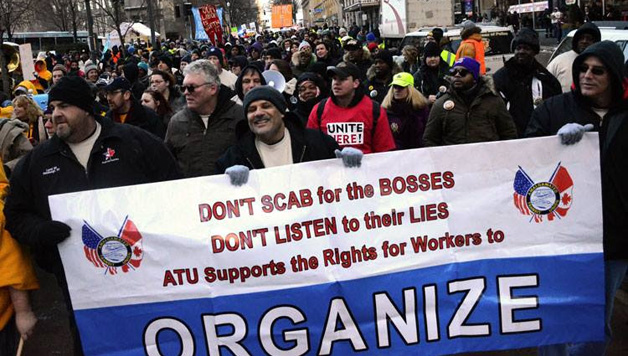 On March 3, thousands of Pittsburgh workers flooded the streets of the city in brutally cold temperatures to demand that the University of Pittsburgh Medical Center (UPMC) treat its employees and the working class of Pittsburgh with dignity and respect. As UPMC is the largest employer in the region, it is unconscionable that they also rank number 3 in number of employees receiving public assistance. They have moved heaven and earth to block employees from forming a union and illegally fired those suspected of union activity, prompting NLRB hearings in recent months. Working Pittsburghers’ disdain for UPMC boiled over in the first of the “Days of Change to Make it Our UPMC.” Marching from the United Steelworkers international headquarters to the UPMC headquarters, fittingly housed in the US Steel Tower, workers held the streets from about 8:00 am to 5:00 pm. The protest “village” along Grant Street was packed beginning in early morning, taking up two full lanes of one of the busiest streets in Downtown Pittsburgh. There was a stage where organizers led chants throughout much of the morning, along with speeches from local workers and activists raising demands that UPMC pay a base wage of $15/hour, recognize the union, and that those fired by UPMC for organizing be brought back to work. Speakers also included a representative of the nurses who went on strike against UPMC in Altoona, PA a few weeks before the March 3 actions.

During the morning part of the rally, police tried several times to sneakily reduce the protest to a single lane of Grant Street by setting up barricades between lanes. When protesters were organized by Fight Back Pittsburgh (USW), Socialist Alternative, and others to ignore the barricades and re-take the lanes, the police finally gave up.

Jasiri X, international recording artist and Pittsburgh activist also gave an impromptu concert for the protesters, performing a song he wrote especially for the fight against UPMC. You can see the video here:

Around 2:00 pm, the crowd broke up to target other low paying businesses in small marches across all of downtown. Socialist Alternative went with our comrades in Amalgamated Transit Union Local 85 and Pittsburghers for Public Transit to hold a small rally of about 60 people outside the Wood Street subway station to demand “More transit, not less!” Others hung a banner from the 9th Street Bridge that read “Pittsburgh is a Union Town!” Around 4:00 pm, the crowd re-formed in front of UPMC headquarters, reinforced by several feeder marches from other parts of the city and going well over 2,000 people. Upon arriving, we found that the police had finally succeeded in reducing the protest village to a single lane. In response, the workers took to the middle of the intersection, flooding Grant Street with our thousands and raising chants. The police were totally flabbergasted and unable to stop the crowd from taking the intersection. As reinforcements arrived, a march started led by ATU Local 85, at a slow and deliberate pace down Grant Street and up to the David L. Lawrence Convention Center on Fort Duquesne Boulevard for a concert, socializing, and strategizing for the fight against UPMC. The following day, demonstrators took the plaza outside UPMC headquarters, which had been “closed” to foot traffic. They made their way to the entrance of USX Tower and around 60 sat down, blocking the building and chanting. In an eleventh hour attempt to stop any bad press if arrests were made, Mayor Bill Peduto arrived on the scene and promised to talk personally with UPMC chief Romoff. The protesters agreed and left the entryway.

After the meeting, it was clear that little was done in the meeting about the fact that UPMC will not pay its workers a fair wage or recognize a union. The reason for this is clear. Despite all his attempts to look progressive and even like a left-populist in some cases, Peduto is a politician for big business and a major source of funding for his campaigns has been people like Romoff. The most that he would say regarding the “pressure” he put on Romoff and UPMC was that he was adamant that the company should “pay some taxes” and make it easier for people in the region to receive medical treatment.

This may be one of the most important demonstrations to have hit the country in recent years. It is on par with the Moral Mondays movement in Raleigh, NC and harkens back to the fight against US Steel and other giants of capital in the last century. The aftermath, and specifically Peduto’s meeting with Romoff, shows that working people can’t afford to wait to be saved from on high by the politicians of big business. Only independent workers’ candidates and elected officials will be able to fight for the working class on the political front. Meanwhile, workers must continue to take to the streets in our own interests.