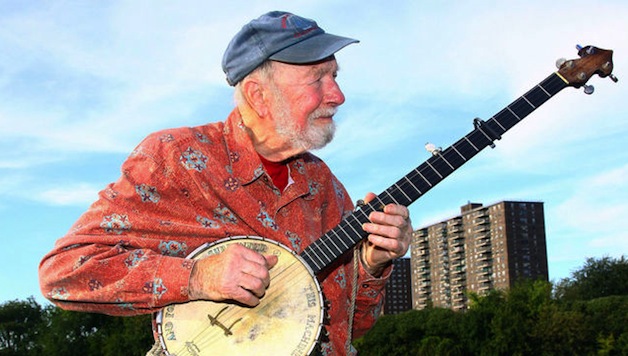 The death of American folk singer Pete Seeger will be keenly felt by those who lived through the social and political convulsions of the 1960s.

This was the era of the American civil rights movement, the international campaign against the Vietnam War, and the general feeling of youth rebellion evident everywhere.

Seeger began writing songs about the conditions these people faced. Increasingly they were more political songs, not least when he campaigned for the Republican forces against Franco’s fascists in the Spanish Civil War.

He played guitar, 12-stringed guitar and famously five-stringed banjo. He formed a folk group called the Weavers, to honour a group of Silesian weavers who rebelled against oppression in the 19th century.

All the Weavers’ members were blacklisted during the 1950s McCarthy witch hunt in the US.

Pete Seeger had joined the Young Communist League in 1936, later joining the Communist Party of America.

His politics and many of his songs brought him before McCarthy’s Un-American Activities Committee. Unlike many, he refused to take the Fifth Amendment, (a protection in US law against self-incrimination), but refused to justify his beliefs and activities, or to incriminate any associates.

This resulted in a prison sentence, which was quashed on appeal though Seeger was blacklisted by broadcasting and recording companies.

Refusing to be silenced he took his music to college campuses, labour halls, small country towns where he performed to small farmers and rural poor.

He later said: “I still call myself a communist because communism is no more what Russia made of it than Christianity is what the churches made of it”.

This period coincided with the US folk music revival. Artists like Bob Dylan, Simon and Garfunkel and Tom Paxton all paid tribute to Pete Seeger’s influence on their own musical development.

The folk music revival coincided with protest movements that developed in the 1960s. Many artists sang songs of protest but Seeger was seen as the father of them all.

Adapting an old spiritual, he produced the anthem of 60s protest, We Shall Overcome. Where Have All the Flowers Gone?, If I Had a Hammer and Turn Turn Turn are also widely known.

In later years his political campaigning focussed on environmental issues. His willingness to share his talents, stand up for the oppressed and stick by his principles to the point of sacrifice will endear Pete Seeger’s memory to socialists.

ABOUT US
Socialist Alternative is a national organization fighting in our workplaces, communities, and campuses against the exploitation and injustices people face every day. We are community activists fighting against budget cuts in public services; we are activists campaigning for a $15 an hour minimum wage and fighting, democratic unions; we are people of all colors speaking out against racism and attacks on immigrants, students organizing against tuition hikes and war, people of all genders fighting sexism and homophobia.
Contact us: info@socialistalternative.org
FOLLOW US
© Socialist Alternative 2020 | All rights reserved
335 Shares
Tweet
Share335