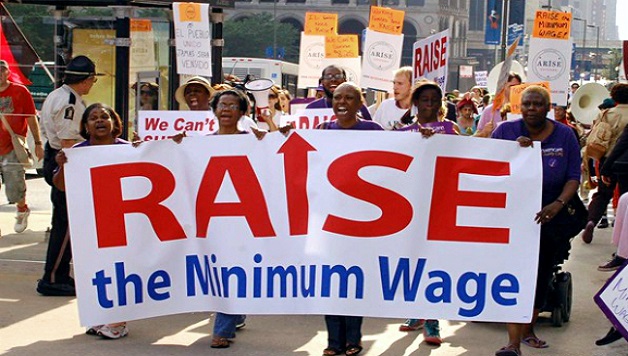 While the question of Obamacare has receded from headlines, the minimum wage has become the biggest domestic political issue in the country. A recent CBS news poll found that 69% of the population wants to see the federal minimum wage raised from the current abysmal $7.25/hr. The minimum wage has been allowed to stagnate for decades during the bipartisan neoliberal offensive, and is now worth less in real terms than under Harry Truman in the late 1940s!

Since the outbreak of the Occupy movement in September 2011 amidst the vast scale of social inequality in the U.S., the extent to which this inequality has grown over the past 30 years has become an increasingly urgent topic in national and local politics. The fast food workers campaign, launched by the SEIU in 2012, popularized the slogan “$15 and a union.” Last November, Seatac, Washington became the first city in the nation to pass a referendum for a $15 minimum wage. Now Seattle is the center of the national fight for a minimum wage that could begin to lift millions of workers out of poverty. This is happening in the wake of the election of Socialist Alternative Councilor Kshama Sawant and the launch of the 15 Now campaign. Already, it is reported that in several other cities, including Chicago, groups are working to bring forward $15 ballot initiatives.

Given all this, it is probably not surprising that the Democratic Party has decided to make the minimum wage a key issue in this November’s midterm elections. They believe this is an issue which will wrong-foot the Republicans. Most House Republicans, for example, remain adamantly opposed to raising the minimum wage, despite the fact that a CBS poll showed 57% of Republicans favoring an increase. The Democrats also hope that minimum wage initiatives, which they are putting on the ballot in a number of states, will help to motivate young people, poor people and people of color to vote in greater numbers. These are the sections of the population that significantly favored Obama in 2008 and 2012, but tend to sit out during midterms. Democratic strategists have also taken note of Bill de Blasio’s landslide victory in November’s mayoral race in New York City. The main theme of de Blasio’s populist campaign was “the tale of two cities”, highlighting the growing chasm between rich and poor in the heart of American finance capital.

Obama himself has recently spoken at length about inequality and the need to raise the federal minimum wage. In a speech in December, he stated, “The combined trends of increased inequality and decreasing mobility pose a fundamental threat to the American Dream, our way of life, and what we stand for around the globe.” By saying this, Obama is reflecting one strand of ruling-class opinion, which is concerned that low wages are hurting the ability of the economy to fully recover from the 2007-2008 implosion. They are shifting away from the right-wing obsession with balancing the budget through endless austerity, a policy that Obama signed onto for a good part of his five years in office. As Obama stated in December, “When it comes to our budget, we should not be stuck in a stale debate from two years ago or three years ago. A relentlessly growing deficit of opportunity is a bigger threat to our future than our rapidly shrinking fiscal deficit.”

But the anxiety felt by this section of the elite about growing inequality and declining social mobility stems from more than the impact on economic growth. It reflects a fear that social division is feeding a radicalization, especially among young people, which could result in a significant increase in social struggle, and ultimately even a threat to the capitalist system itself.

Limitations of Proposals From the Democrats

Obama is planning to speak at meetings around the country about the need to raise the federal minimum wage to $10.10/hr. Some people might see this as proof that the Democrats can be pushed in a more progressive direction. But from our point of view, $15 is truly the minimum to bring people out of bare subsistence, especially for workers supporting families. This is doubly true in high-priced cities like Seattle or New York. Also, while a $10.10 federal minimum wage would certainly be an appreciable change for tens of millions of American workers currently being paid poverty wages, in no part of the country can it remotely be called a “living wage”. A number of the ballot initiatives being pursued at state level aim even lower, like in Arkansas and New Mexico where the minimum wage Democrats are demanding is $8.50 an hour! De Blasio, for all his rhetoric, has not supported any concrete demands.

Nowhere in the country are the Democrats prepared to countenance mobilizing working people, such as through mass demonstrations that might give workers a sense of their social power. They see the issue of raising the minimum wage first and foremost as a way to gain electoral advantage. The role of populists like de Blasio is to draw people back towards this discredited corporate party, without promising too much. It really must be asked: how is it that the minimum wage was allowed to effectively decline over such a long period? Why are the Democrats suddenly clamoring to “do something about it”? Could it be the increasing pressure from below?

And what is the fundamental difference between socialists and the Democrats on the question of the minimum wage, especially for Democrats adopting more radical-sounding populist language? The Democrats support this demand as a way to entice people to continue supporting the capitalist system, a system that inevitably results in massive inequality and poverty. Socialists, on the other hand, understand that unless we replace capitalism by a democratic socialist society, then working people will never enjoy a secure life. We also fight for a higher minimum wage not only to improve the lives of working people, but as a step to building a radical mass movement of workers to challenge the capitalist system and the two-party system that it props up.

Some on the left have criticized Socialist Alternative’s call for a $15 wage too modest a demand. This would be true if we limited our demands to a $15/hr minimum wage, or if we promoted $15/hr as a “solution” to poverty or inequality. Instead, we see it as a step towards a living wage, which should be far higher than $15/hr. We see the demand for $15 as the best way right now to galvanize mass anger at the system. The fight for $15 can be compared in many ways to the fight for an 8-hour day by the labor movement in the late 19th and early 20th centuries.

It is an enormous step forward that a wide range of unions and community groups have come together with socialists in Seattle to campaign for a $15 minimum wage. The next step must be to increase the pressure on the Seattle establishment, by building a powerful grassroots movement in Seattle, while spreading the 15 Now campaign as far and wide as possible nationally. We can be absolutely sure that the ruling class will push back, and we need to be prepared to fight that.

If a genuine mass campaign can force the establishment to make real concessions on this issue, it will enormously increase the confidence of the working class and young people to fight back on other important issues across the board. A mass struggle around the $15 demand will help to clarify the need to break from the two-party system that serves the interests of big business, and can begin to lay the basis for the creation of a new, independent, political working class movement that can fight for the real interests of working people and the poor.

Break from the Democrats: Protest Vote for Howie Hawkins