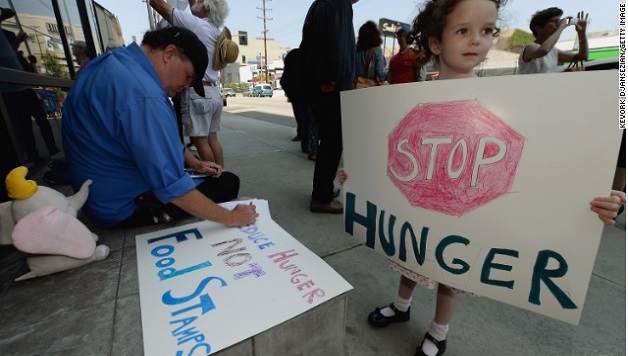 On December 28, 2013, emergency unemployment insurance expired, leaving 1.3 million people without this key source of income because Congress refused to extend it.

Sen. Rand Paul (R-KY) said, “When you allow people to be on unemployment insurance for 99 weeks, you’re causing them to become part of this perpetual unemployed group in our economy.”

But how can every unemployed person be at fault for not finding a job when there are three job seekers for every one job opening?

The government is taking aim at the poor. Especially hard hit are women, children, and people of color.

Congress is preparing to cut food stamp benefits by $8.7 billion over the next ten years. This comes only two months after the country’s 47 million food stamp recipients were hit with $5 billion in cuts.

The $5 billion in cuts affected everyone, with a family of four now getting $36 less a month. The new $8.7 billion in cuts will most likely affect approximately 850,000 households in states that give recipients $1 in heating assistance in order to trigger higher food stamp benefits. Benefits will be cut by an average of $90 a month. Currently, the average household benefit is around $270 a month.

Food stamps or, as they are now known, SNAP (Supplemental Nutrition Assistance Program) benefits, is clearly a necessary program. One in seven people in the U.S. receives its benefits, and half its recipients are children.

The cuts have already resulted in more people showing up at food banks. Further cuts will only continue that trend, making it even more difficult for food banks to keep people fed.

A recent study showed that among diabetics in low-income neighborhoods, hospitalizations were 27 percent higher in the last week of the month compared to the first, when most states send their food stamps out. Another study showed children from food-insecure families are 30 percent more likely to have been hospitalized for a range of illnesses.

While politicians talk about how there isn’t enough money for these programs, we all know that the money is there for corporate tax breaks and military spending. We need to organize and fight back to tax the rich and fund people’s basic needs!