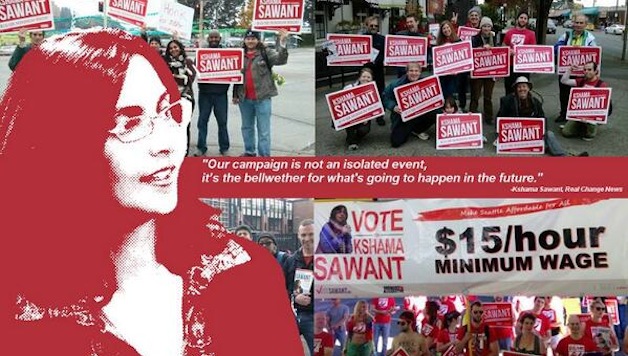 Who would have imagined that in a major American city, at a post election inauguration ceremony attended by 1,000 people, a new, directly elected Mayor and other members of the City Council would be completely eclipsed by the response of the attendance to a Socialist Councillor? That was the situation in Seattle on 6 January. Socialist Alternative Councillor Kshama Sawant, in her speech, roundly denounced the problems which ‘crisis ridden capitalism’ causes for working class people, called for workers to organise, for a new party of the working class as an alternative to the Republican and Democratic Party politicians and for socialist change.

Kshama Sawant was elected in November, achieving a stunning 93,000 votes to defeat a long time, right wing incumbent supporter of the Democratic Party. Seattle, with a population of 634,000, has only nine members on the City Council who are elected from the city at large, rather than from smaller electoral areas within the city. The elections are held on a staggered basis with, for example four seats up in 2013 and five the previous year.

I was privileged to be at the inauguration. It was an amazing event by contrast with the first meetings of newly elected Councils in Ireland. It was held in the huge foyer of City Hall and included the swearing in of the Mayor Ed Murray and three other Councillors re elected after having served on the Council previously. The public at large are invited to attend this event.

City officials told me that normally the ceremony would take place in the Council chamber which has seats for 200 members of the public. This time it was different, however. Murray is the first openly gay Mayor elected in Seattle whose business and political establishment consider themselves to be progressive in comparison with other urban areas in the United States. He was the candidate supported by the Democratic Party establishment and invited a large number of establishment representatives to attend.

The really significant difference, however, was the huge political upset created by the election of Kshama Sawant. Previously it would have been considered unthinkable for a Left/socialist candidate to defeat a Republican or Democratic candidate in a major city in the US. However, Socialist alternative launched a massive campaign addressing the issues affecting the working class of Seattle. At the cutting edge was a demand for the minimum wage of $15 an hour to address rocketing accommodation and other living costs.

Kshama’s campaign created great excitement among ordinary people, sick of the big business backed two party system in the US. Hundreds of people volunteered to work on the campaign. A massive $141,000 was raised in thousands of contributions from ordinary people and none from big business.

At the inauguration the packed audience spread from the foyer floor up a very wide staircase onto balconies overlooking the speakers’ podium. The front page headline of the establishment Seattle Times summed up political clash, ‘Murray talks innovation, Sawant raises defiant fist’. In an article subtitled, “Sawant upstages Ed Murray”, the radical weekly The Stranger described the scene. “Socialist city council member Kshama Sawant drew the loudest cheers and the most sustained applause as she denounced “international capitalism” while proclaiming from the center of this bastion of big-D Democracy that “working people need a new political party… accountable to themselves. T-shirted, sign-waving Sawant loyalists raucously cheered as well-dressed, grim-faced Democratic Party regulars shifted on their heels, wondering what to do with their hands. Sawant herself displayed no such uncertainty, closing her speech by raising a fist in the air and declaring: “Solidarity’.”

Accounts of this unprecedented inauguration were reported by media all over the United States and much further afield. It presages greater struggles to come and points to the possibility of building a real movement for socialist change in the very heartland of world capitalism.

Building the Fight for Rent Control in Seattle