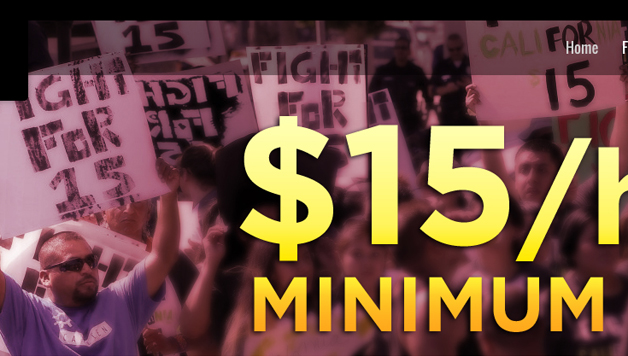 Across the country low-wage workers are rising up, protesting, and striking for a $15/hour minimum wage.

In Seattle the movement is poised in 2014 to be the first major U.S. city to win $15. Voters in SeaTac, a small city outside Seattle, recently passed a ballot initiative for $15. A leader in the Fight for $15 in Seattle, Kshama Sawant, shocked the corporate elite by winning a City Council seat in Seattle as a Socialist Alternative candidate. Newly elected Mayor Ed Murray has also declared his support for $15.

But big business will not let this pass without a fight. They will mobilize their resources to derail, delay, and dilute efforts to end the poverty wages that are the source of their profits.

The only way we can counter the power of Corporate America is by building a massive grassroots campaign with local neighborhood and campus groups, town hall meetings, mass rallies, and strikes.

Seattle Councilmember Kshama Sawant, along with a growing list of workers, unions, and activists, have come together to form 15 Now to organize this movement.

15 Now is currently centered in Seattle – where the Fight for 15 has the best immediate prospects – but we aim to build a nationwide movement. A victory in Seattle in 2014 would open the floodgates for working people to demand $15 in cities across the country. But it will not happen automatically.

We need you to get involved. Please sign up here to join this historic campaign and help fund the Fight for 15! We will need real resources to organize the struggle and counter the lies and propaganda of the richest 1%. We are relying on you – workers, young people, and activists. To lay the basis for a serious campaign, we are launching an appeal for 1,000 people to donate $15/month. Sign up here to make a monthly donation or one-time donation, and add your name to the list of people supporting 15 Now.