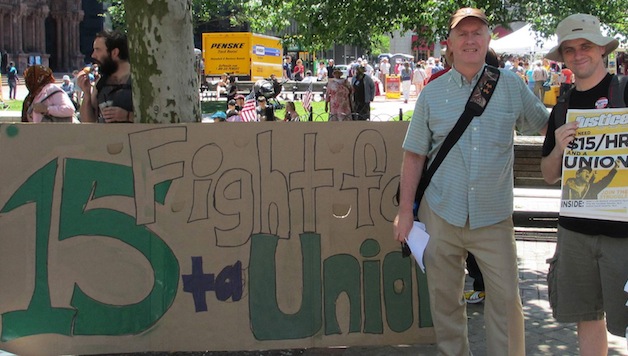 Many activists say that electoral politics is merely a distraction and that the super-rich have rigged the electoral process. They argue that real change is won through protests, direct action, and strikes, not elections. It is true that Democrats co-opt social movements and funnel these energies into electing corporate-controlled politicians, but running independent working-class candidates can be a valuable aspect of a strategy to fight against big-business domination.

Candidates and electoral campaigns can shine a light on struggles, bring media attention to a fight-back, and shift the political debate in society. Electoral campaigners can be taken more seriously when knocking on doors than other activists. Seamus Whelan, a registered nurse and union activist, is running for City Council in Boston, and this campaign is helping to build the struggles organized by working people in the city.

As we go to print, the low-wage worker actions and organization that have gained headlines nationwide and shut down fast-food businesses in seven cities have only started to come to Boston. The Seamus Whelan campaign has championed the fight for $15 an hour and a union, making this demand for nearly doubling the minimum wage the campaign’s centerpiece. Thousands of leaflets have been handed out and thousands of doors knocked on, provoking conversations across the city about corporate domination and the need to fight back to win.

The day after George Zimmerman was found not guilty for the racist murder of teen Trayvon Martin, we knocked on hundreds of doors in the multi-racial neighborhood of Egleston Square to build the rally taking place that night. People were encouraged and felt confident that a candidate for city council was taking up this issue.

The Massachusetts Nurses Association (MNA), of which Seamus is a member, is conducting a campaign for safe staffing legislation in Boston to improve health care and create jobs. Seamus is helping to lead the struggle against cuts and layoffs at his hospital, and our campaign is helping nurses publicize this battle.

Unfortunately, most people view politics in this country as merely elections. While ongoing movements can change this, we also have to acknowledge reality and interact with the electoral process in a meaningful way. We can use elections to publicize struggles and show in practice that the two-party system can be challenged. We can make demands that push struggles forward and unite working people, like the $15 an hour minimum wage. Our demands push at the limits of what capitalism can provide, while we also offer a socialist alternative to the system itself.

The time is now to get organized to run viable independent left candidates; this process could push forward a debate in the labor movement and community groups about the need to break from the Democrats. This, alongside the strengthening of struggles and the ongoing betrayals of corporate politicians, can lay the basis for a new mass workers’ party. A viable working-class party in this country would massively shift the political discussion, strengthen the confidence of movements, and be able to challenge the currently unbridled corporate control of politics.

Socialist Alternative Statement of Solidarity with the Saint Vincent Nurses on Strike!