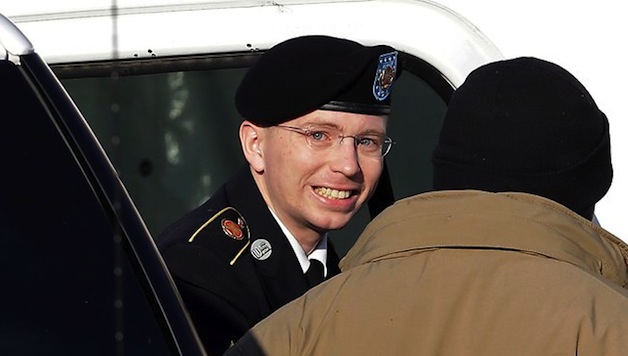 This article is produced by the Socialist Party which is a section of the Committee for a Workers’ International in Ireland.

In 2005 US Marines murdered 24 civilians in Haditha, Iraq. Over the last eight years, what punishments have been imposed by the US military on the killers? Well, one soldier got a rank reduction and a pay cut. That’s it. Compare this to the fate of Bradley Manning: a 136-year prison sentence for exposing a host of similar atrocities and crimes.

Seeing the true nature of the war while stationed in Iraq, Bradley Manning (also known as Breanna) leaked diplomatic cables, war logs and classified videos. He showed that the killing of civilians and the torture of prisoners was routine, told the world of diplomatic spying and hypocrisy, and revealed tens of thousands of hushed-up civilian deaths.

Manning was betrayed and arrested in 2010 and had to wait three years in solitary confinement before even getting a trial. He has been confined to a tiny cell, frequently put in chains and stripped naked. But the verdict shows that this is only the beginning of the ordeal that US imperialism wants to impose on him.

Prosecutors wanted to convict Manning of “aiding the enemy” to top off a heap of other “crimes” and open up the possibility of execution, but this was too much even for these hacks who vilify a person of immense courage as a “traitor”.

Had Manning kept his head down and followed orders like so many other soldiers, he would then indeed have been guilty of “aiding the enemy” – because the corporate-military machine that killed hundreds of thousands of innocent people in Iraq is the enemy of the American people, and of the human race.

As millions of soldiers realized in the closing years of World War One, “The real enemy is at home” – in the corridors of power where big business and its pet politicians decide the fate of whole nations. Like Manning, huge numbers of ex-US soldiers drew the same conclusion and were to the forefront of 2011’s Occupy movement.

Obama has added another exhibit to the vast parade of evidence that he is not an agent of “hope” or “change”, but just another stooge for the 1%. The US government has proved once more that atrocities and war crimes are not just committed by a few “bad apples” in the military, but are woven into the fabric of the US war machine. How else but by brutality, terror and torture could US imperialism hope to conquer and loot an entire country? And how else but by terror such as that inflicted on Manning can they make ordinary soldiers fight this war?

The US Army Field Manual says it’s the duty of soldiers to report war crimes. But like Obama’s promises to protect whistleblowers, legal defenses for those who expose crimes are just so many pieces of paper. The contrast between Manning and the Haditha murderers is clear, and their different sentences do not reflect any legal or moral logic – they just reflect the interests of US imperialism.

The 136-year sentence shows that the US government and military are anxious to scare the hell out of anyone who wants to do what Manning did and expose the truth. Edward Snowden, who recently blew the whistle on the US government’s internet surveillance networks, knew about the revenge being taken on Manning but did the right thing anyway. This shows that US imperialism can’t scare people into silence.

From the huge prison population, the PATRIOT Act and the military clampdown on Occupy to recent weeks with the acquittal of racist murderer Zimmerman and the sentencing of Manning, democratic rights are being constantly eroded in the US. With the country mired in economic decay and unpopular, unending wars, the 1% are increasingly resorting to repression to maintain their power.

Democratic rights are not safeguarded by laws or by the privately-owned media, but in the final analysis by the confidence and organisation of workers and young people, and their ability to fight for those rights. In a situation where the lower 80% of the people only own 11% of the wealth, the erosion of democratic rights is obviously inevitable.

As long as the resources and enterprises remain in the hands of super-rich private individuals, there will always be unjust wars of aggression, and there will always be oppression at home. But equally there will always be a working class, which, when organised and militant, as in the Wisconsin strike in 2011, has the potential to make the rich back down, and even to break their power. There will always be brave young people like Manning who will risk everything to stand up for truth and freedom. When Bradley Manning walks free again, it will be thanks to mass movements of young and working-class Americans against the power of US capitalism and imperialism.