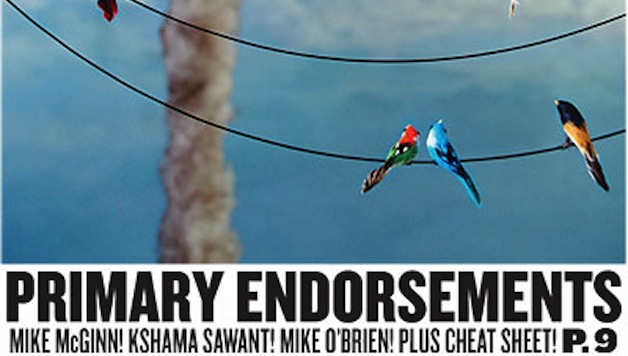 This morning The Stranger announced its endorsements for the City Council Position 2, writing “In this race, the clear choice to represent Seattle is Kshama Sawant.”The Stranger was sharp in their criticism of her opponent Richard Conlin who “has claimed to be a progressive environmentalist during his 16 years on the council, when in fact he has spent those four terms helping to kill mass transit, build new highways, and seek harsh penalties for panhandlers. He’s not a progressive; he’s a green-washing liberal fraud.”

Sawant, on the other hand, is “sharp as a tack and loud as an air horn … [promoting] a $15 an hour minimum wage and new taxes on the wealthy to bolster funding for mass transit, while cutting taxes on small businesses, homeowners, and workers.”

This endorsement comes on top of growing support for the Sawant campaign. She already has the endorsement of three labor unions: the American Federation of Teachers Local 1789 representing Seattle area community college teachers; the Communication Workers of America Local 37083 representing high-tech workers; and the Washington Federation of State Employees Local 1488, an AFSCME affiliate representing 3,000 workers at the University of Washington, UW Medical Center, and Harborview Medical Center.

Karen Strickland, President of the AFT Washington, has endorsed Sawant: “I have been impressed with her intelligence and analysis of economic justice… [She promotes] policies that will improve the lives of Seattle’s working people … Dr. Sawant’s perspective, ideas and energy will help further our city’s progressive goals.”

Tim Harris, Founding Director of Real Change, and Pastor Rich Lang of the University Temple United Methodist Church are among the other community leaders who are backing Sawant. Harris said he was “supporting Kshama Sawant for City Council because Seattle needs truth-tellers who deliver more than business as usual. Sawant is a hardworking, principled, and creative leader that deserves our support.”