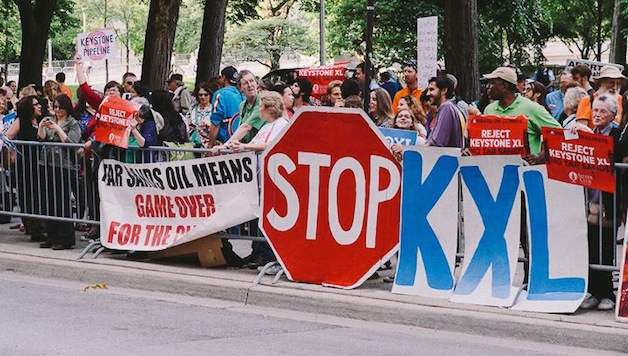 According to NASA, the nine warmest years on record have all come since 1998. Capitalism’s reckless pursuit of profits has created monsters in the form of “Frankenstorms” like Hurricane Sandy and the gigantic tornadoes chewing up towns in the American Midwest. Although the consequences of not urgently transitioning to a green economy are closer to us every day, there is reason to hope: Articles published in Scientific American show the potential to rapidly switch to wind, water, and solar power (“A Plan to Power 100 Percent of the Planet with Renewables,” 11/2009).

Despite these realities, Obama’s “all of the above” energy development strategy continues to play into the hands of big oil and the pollution profiteers, and it seems likely that the Obama administration will choose to douse our hopes for a green future with tar sands crude oil by approving the Keystone XL pipeline.

The pipeline would stretch from the Alberta tar sands in Canada down to the Gulf of Mexico. “The Alberta tar sands are estimated to contain enough carbon to raise carbon emissions in the atmosphere…by more than half. It would be more than enough to create more climate change than in the entire history of humanity on earth,” (“Pipeline Climate Disaster: The Keystone XL Pipeline and Labor,” www.labor4sustainability.org).

The environmental movement has rallied around the cause of stopping this pipeline’s construction. Demonstrations and direct actions have been used to defend our environment. These protests need to be expanded to involve more and more of the public. More Americans than ever support taking action to stop global warming, and a recent poll by the Pew Research Center shows a 69% majority saying that there is “solid evidence” of global warming (4/2/13). Why, then, did that same poll show 66% of Americans in favor of building the Keystone XL pipeline, with 23% opposing it? Why was there a recent rally of the building trades where over 1,000 union members demonstrated in favor of the pipeline? It is not because working people don’t care about the environment. It is because, in this economic crisis, working people are in a difficult situation that big business wants to exploit.

Workers shouldn’t have to choose between putting food in our children’s mouths and ruining the world for our grandchildren. We need jobs; we need a future. This is a warning to the environmental movement: If it wants to win, if it wants to become a mass force within society, the environmental movement must place the demand for green jobs – at union wages and benefits and with rehiring and retraining where needed – front and center.

Union support for Keystone XL shows yet again that unions must take a stand independent of the two parties of big business. Rather than trailing along behind the Democratic Party, if the unions had already been mobilizing to demand a massive green jobs program, workers might not have been faced with the terrible choice of selling the future to save the present. Unions would be in a better position to fight for their members by returning to the traditions of social movement unionism – focusing on social justice for all, allying with other progressive forces, and winning support in the wider community – as the Chicago Teachers Union has recently shown. The fight for workers and the fight for the environment can and must go together, and this requires putting the needs of workers and the environment ahead of the constraints of the two-party system and the dictates of capital.