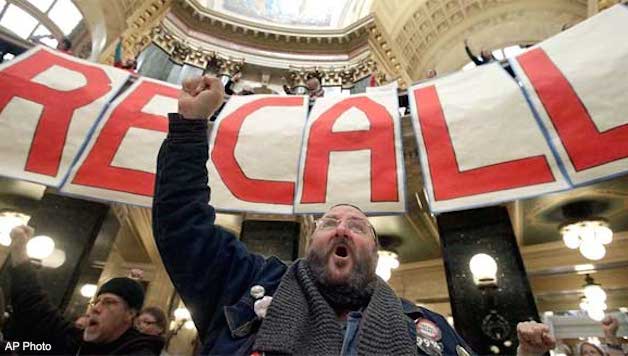 The movement to recall Walker and his Republican goons is gaining momentum. Hundreds of thousands of workers and young people are looking towards the recall to strike back and teach corporate politicians a well-deserved lesson. But does the recall strategy measure up to the challenge we face?

Unfortunately, we have to say it will not be enough to stop Walker and his corporate offensive. A recall will take months, a year or more (nor is there any guarantee of victory). But that won’t stop the immediate impact of this disastrous bill as public sector unions now face the danger of being dismantled in the coming weeks. Nor can we simply depend on a legal challenge.

Now is the time – with March 12 seeing a massive 200,000 protesting and many more determined to fight – to rebuild a mass movement which is capable of reversing this bill and stopping the cuts. It’s crucial we build for mass demonstrations, workplace meetings, job actions, and student walkouts on the day the bill goes into effect and on April 4, along with the recall effort.

Of course, Walker has shown he won’t be stopped by protests alone. That is why Socialist Alternative has raised from the beginning of this struggle that in order to win we will need to mobilize our full power as workers, including by organizing strike action to shut down the state through a one-day public sector general strike.

After the bill passed there was a groundswell of support for the idea of striking, with chants, signs and even local union leaders calling for a general strike. The situation was pregnant with the possibility of mass strike action. However, the top union officials did everything they could to stop a strike from happening. Through maneuvers at union meetings to scare tactics, they clamped down on the mood of their own membership for bigger and bolder action and instead have channeled the movement into focusing solely on the recall effort.

The union leaders and Democratic Party officials emphasized that a strike was too risky, illegal, and would lead to mass layoffs. But far greater are the risks of not striking and allowing this bill to destroy our rights, jobs, benefits and even some unions themselves. And we can’t win if we don’t fight.

Nor should the threat of termination automatically stop us. If the whole state was shut down – aside from necessary emergency services – by a one-day public sector strike they couldn’t fire all the teachers, nurses, and state and city workers. To be effective, any strike must base itself on the basic principle of solidarity, with the whole movement rallying to the defense of any individual workers victimized for going on strike.

We must also remember that the union and civil rights movements were built by those prepared to defy unjust laws. Walker disregarded the law himself, and furthermore anti-labor laws like Taft-Hartley have been passed by Corporate politicians and are against the interests of working people. As Martin Luther King Jr. said, “there are two types of laws: just and unjust…One has not only a legal but a moral responsibility to obey just laws. Conversely, one has a moral responsibility to disobey unjust laws.”

A general strike could have been called and organized in the days after the bill was passed if the rank-and-file were organized and prepared to systematically take up the arguments of the union leadership and win a solid majority of their fellow members over to a clear plan for strike action.

The lesson is that we need to organize the movement from below and transform our unions into fighting, democratic organizations. The top officials claimed that a strike could turn the broad public support against the unions. In fact, wide support for a strike could be maintained if the demands were not limited to defending public-sector union rights, but instead said that no worker should pay for the crisis of Wall Street and Big Business. Unions must fight for an increase in the minimum wage, jobs or decent benefits for the unemployed, and against cuts.

Michael Moore correctly stated that this was a “class war.” The top union leaders, without asking their members, offered to accept almost all of Walker’s economic demands because they are trained in the methods of class compromise and partnership with corporate politicians in the Democratic Party, not the methods of class struggle.

As part of building a mass movement in the streets we also should support the recall of Walker and the Republicans. But who should replace them? The Democrats are also backed by big business and, despite the “Fab 14” opposition to the attacks on bargaining rights, have said they agree with Walker’s attacks on workers’ healthcare, pensions, and budget cuts.

It is therefore necessary that the interests of the movement are independently represented in the elections. Working people should run their own independent candidates as a step towards forming a mass party of workers and young people that can be a real voice to fight for and defend their interests.