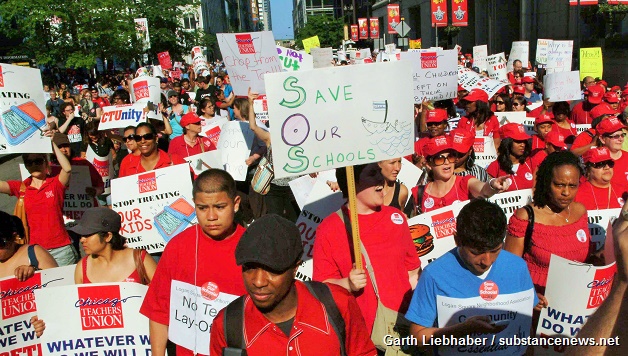 State legislatures nationwide have slashed billions of dollars from public education as they deal with revenue shortfalls brought on by the economic crisis. According to a report from the National Conference of State Legislatures, the 50 states must close over half a trillion dollars in deficits by 2013, which could include laying off an estimated 100,000-300,000 teachers this year.  In addition to these devastating cuts and layoffs, there is a concerted effort to transform education more and more to suit the needs of big business.

Almost every day the mainstream media carries articles about how teachers are to blame for the problems of public education. The ruling establishment is looking for a scapegoat as they carry through their education reform to deflect the blame for the real problems in public education, like underfunding, class size, curriculum, high-stakes testing, incompetent administrators, and the broader socio-economic issues which inevitably find an expression in the classroom.

The ruling establishments goals are to discredit public education as much as possible while weakening the teachers unions. Obamas Race to the Top grants took advantage of states desperate for funding to push an agenda of raising caps on charter schools and tying high-stakes testing to teacher evaluation and tenure, a step towards making it easier to fire teachers at will.

Understandably, many parents have looked to charters as the only escape from crumbling public schools, but new studies show that charter schools arent any better overall than public schools (Center for Research on Education Outcomes, Stanford University). They are, however, unaccountable, often run for profit, and usually non-union. Lurking behind the current charter school push are organizations backed by billionaires and big business associations who look at public education and see a bastion of union power that needs to be checked, billions of dollars that could be siphoned off as profits, and a future workforce to be molded for obedience and basic skills in an increasingly low-wage market.

Teachers, students, and parents have been fighting back. On March 4, we saw the first nationally coordinated day of action to defend public education. In over 30 states, and most notably in California, students, professors, teachers, and education workers came out in protests. High school students have protested by organizing walkouts this spring in Cleveland, New Jersey, Florida and New York City.

Teachers unions are playing an increasingly important role. A reform caucus in L.A. won the leadership of the teachers union and has been battling against layoffs, charter expansions, and cuts for several years. In April, a bill in Florida to link test scores to teacher pay and eliminate tenure for new teachers was defeated by protests including Miami area teachers staging a call-in-sick day.

Perhaps the most advanced struggle for the future of education is taking place in Chicago. For several years, a new rank-and-file caucus in the Chicago Teachers Union (CTU) called CORE has organized and mobilized teachers, parents, and students to confront the big business agenda for education in Chicago, dubbed Renaissance 2010. Their actions have successfully prevented a number of school closings.

In a run-off election on June 11, CORE was elected to the leadership of the CTU, with the president of the slate receiving 60% of the vote. This represents the biggest blow to Obamas attempts at education reform: his own Secretary of Education, Arnie Duncan, launched Renaissance 2010 as head of the Chicago school system. Chicago teachers have sent a clear message that they are fed up and ready to fight back (see video below).

CORE has shown how the attacks on education can be confronted and the central role that unions can play, but it is only the beginning. The federal government, the mass media and corporate America are all lined up to push through their agenda for education and weaken the teachers unions.

It will take a mass movement on a national scale to fight back. The teachers unions must be transformed into democratically run, fighting organizations. With their thousands of members, infrastructure and resources, these unions are in a position to play a leading role in bringing together teachers, parents, students, and working people in general.

The attacks are unmistakably coming from the Republicans and Democrats alike. The education movement cannot give any support or funding to either major party. We have to be clearly opposed to the cuts and layoffs, calling for tax increases on the wealthy and big corporations to prevent cuts, but we must also put forward positive proposals to improve public education, like reduced class sizes and full federal funding for schools instead of the current unequal property-tax-based system.

We should look forward to the fall, Oct 7 is shaping up to be the next national day of action. The movement ultimately has to put forward a vision of education that goes beyond calling for more resources and also takes education out of the hands of corporate politicians, reshaping it to suit the real educational needs of students, parents, and society as a whole. This means linking the fight for public education to a struggle to fundamentally transform society towards democratic socialism.