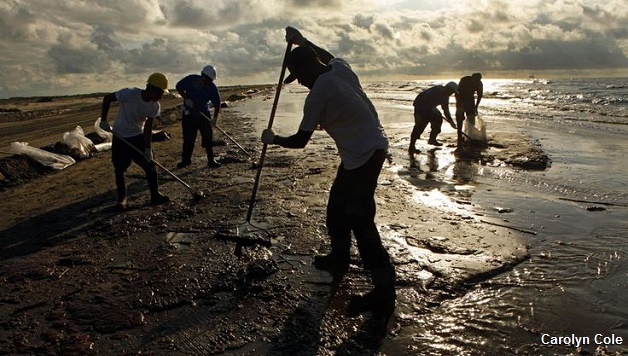 On April 20, 2010, a scant 27 days after the five year anniversary of the BP Texas City refinery explosion that killed 15 workers and injured 170, the state of the art deepwater drilling rig Deepwater Horizon leased by BP, exploded, burned and sank into the Gulf of Mexico killing 11 workers and injuring 17. Raw crude oil from the uncapped exploratory well that the Horizon was drilling began pouring into the ocean at an undetermined rate.

While attempts to slow and contain the spill are underway, a debate is raging among the ‘experts’ about just how bad this spill really is. Estimates of the spill range from 5,000 to 60,000 barrels a day. At the lowest estimates it will take 54 days from start of spill to equal the Exxon Valdez spill, previously the worst oil spill in U.S. waters. If the higher estimates are correct, we have already far surpassed it.

Some fear that due to the incomplete casing and the tremendous pressures involved there may be further failures of the wellhead structure. If that happens this spill could equal or surpass the 1979 Ixtoc 1 well blowout in the Gulf of Mexico. In that spill it took nine months before relief wells could bring the flow of oil under control, resulting in the largest release of oil in the world (100 million gallons) until the Gulf War.

BP, Transocean, and the US Coast Guard and Navy have sent surface ships to skim oil from the water, and submarines to try to shut off the valves on the sea floor and inject toxic dispersants into the leaking oil plume. The latest attempt to stop the oil flow by dropping a metal containment dome onto the largest leak 1 mile down on the sea floor has also failed. A much smaller dome is now being prepared, but BP officials acknowledge that even if it works – a big if – it will only capture some of the leaking oil. There does not appear to be a clear plan to fully contain the oil leak.

Whatever the exact numbers, there is no debate that an environmental catastrophe is taking place. This spill is poisoning some of the most productive marine environments in the world. The Coastal wetlands are particularly vulnerable and impossible to clean. The spill comes just as many animal species are preparing their annual migrations through the Gulf, and there remains the possibility that the surface oil could be swept up by the Gulf Stream and make its way up the Atlantic coast.

The dispersants that BP is injecting into the oil plume are also considered toxic. The effect of the dispersants, essentially detergent soaps, is simply is to keep more oil from rising to the surface. They do not remove any oil from the ecosystem, and many suspect they do more harm than good.

The Deepwater Horizon was owned and operated by Transocean, which bills itself as “the world’s largest offshore drilling contractor and the leading provider of drilling management services worldwide.” It is registered as a seagoing vessel flagged in the Marshall Islands. BP was paying Transocean approximately $500,000 a day for the use of the Deepwater Horizon to drill and set wells in the “Macondo Prospect,” the area of ocean floor that BP had leased from the US Government. Transocean was further subcontracting out work to Halliburton to “case” the well. It was during this operation that the blowout occurred.

Of the 126 individuals on board, 79 were Transocean employees, six were from BP, and 41 were from other contractors. Flagging vessels to neo-colonial governments and the breakdown of the workforce into subcontracted groups allows companies like BP to better control their costs, escape regulation, limit their liability, and drive down wages and working conditions by passing the responsibility for production goals onto the contractor. Subcontracting also results in a loss of coordination and cohesion between work groups, as anyone who has worked in a similar situation knows.

Working the oil rigs in the Gulf of Mexico is one of the most hazardous occupations in the U.S. Between 2006 and 2009 there were 632 reported fires, explosions or other accidents that resulted in the deaths of 30 workers and 1296 injuries. Many injuries suffered by oil field workers are “life changing.” Limbs are crushed or severed by heavy machinery. Fires cause disfiguring burns. Explosions tear workers apart causing injuries similar to those suffered by combat veterans. A constant push for productivity increases and profits, long hours and fatigue, 24/7 shift work, and a “macho” attitude toward safety encouraged by management, result in a lethal work environment. Workers are a disposable part of the machine.

The 115 workers on the platform who made it to the lifeboats are lucky to be alive. In interviews they have reported that none of the supposedly state of the art safety equipment or alarms gave them any warning. A 300 foot geyser of oil and seawater shot out of the well and a cloud of highly flammable gas settled over the rig. When this gas found a source of ignition, probably a generator or drill motor, it ignited in a tremendous explosion. The 11 workers whose bodies have not been found were probably obliterated in this initial explosion.

The very nature of deep water drilling operations in the Gulf of Mexico is technically challenging. Mark Riding – Offshore Magazine 5-1-2010 writes, “These formations are characterized by a very narrow margin of safety between the pore pressure gradient and the fracture pressure gradient. Drillers must walk a virtual tightrope between losing circulation and risking a blowout.”

You would think that with this acknowledged risk that special attention would be paid to safety devices, but BP like the rest of the oil industry, fights the introduction of safety equipment claiming that it slows production and is unnecessary.

The “drill baby drill” lobby insists that we have the technology to cleanly extract oil, but what good does the technology do you if you don’t use it? Drillers and production platforms routinely disable safety alarms and fail to install or maintain necessary equipment that could prevent these disasters. In addition to a shut off valve at the well head, oil wells are supposed to have a “Blow Out Preventer,” an emergency device that cuts and seals the well. There are supposed to be manual and automatic controls to actuate this device. Three layers of redundancy is considered “prudent” in the industry.

A device called an Acoustic Shutoff which costs about $500,000 according to press reports, the cost of a single day’s operation of the Deepwater Horizon, would have enabled the remote shutoff of the leaking well by sending a sonar signal. While this would not have stopped the initial explosion, it would have stopped the fire and oil spill. This device is required by many nations, including Norway and Brazil, but not the US.

They estimated it would cost the oil companies about $4.6 million in start-up costs and $8 million in annual costs to maintain an adequate safety program. BP, Transocean and other industry leaders lobbied to cripple any new regulations and as usual where 100% effective. These companies main concern is uninterrupted production and ever-higher profit margins. The lives of their workforce and the environment come last.

The Deepwater Horizon disaster shows that private industry is incapable of policing itself and producing oil and gas cleanly and safely. It has put the Obama administration’s plan to push for more offshore drilling on hold. Studies will be done. After time, a report will be released detailing the technical and procedural mistakes before the explosion. Alarms were disabled, someone was asleep, procedures weren’t followed, etc. BP and Transocean may even be fined for failure to follow accepted safety practices. A widow here and a father there may win a wrongful death civil suit against the employers. And after the shock passes, after the studies and debates and pithy words at memorial ceremonies, they will reintroduce plans to expand offshore drilling with ‘new improved’ safety guidelines.

But who will enforce these guidelines? Will it be the same group of private industry managers who are literally in bed with the Government inspectors? Clean and safe oil, coal and gas will only come from having public ownership of the energy industry and with democratically elected committees of workers exercising direct control over production techniques and enforcing safety procedures. This must be combined with full union rights for energy workers enabling them to control their work, putting workplace safety and the environment before production quotas and profits. The struggle against future disasters must be linked to a movement for public ownership of the energy industry, and a comprehensive plan, as part of an overall plan of economic production, to transition to renewable, non polluting energy sources.

End the Domination of Big Oil

Oil Workers Strike Across Country for Worker and Community Safety