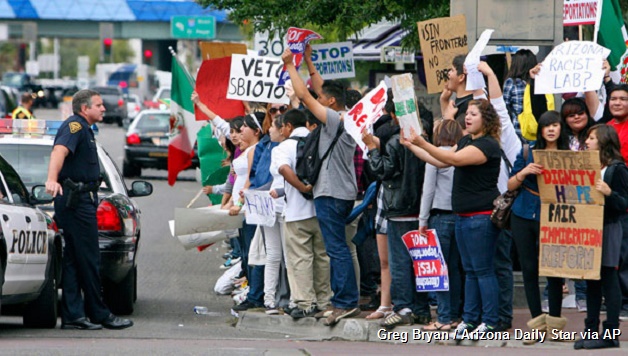 The following is the text of a leaflet, in English and Spanish (Haga clic aquí para leerlo en español), distributed by Socialist Alternative on May 1st demonstrations across the country, outlining a program and strategy to take the immigrant rights movement forward. Also, for a report and analysis on the May 1st protests, click here.

Arizona Republican leaders have thrown down the gauntlet to immigrants with new racist legislation. Anyone who reasonably looks like an illegal immigrant must be stopped by the police and forced to cough up documents and identification. When asked what an undocumented worker looks like, Arizona Governor Jan Brewer had no answer. Clearly, the bill will affect anyone with brown skin or an accent.

Supporters of immigrant rights have responded with struggle. Nearly 2,000 school students walked out of class in Phoenix after the bill was passed. With similar bills being discussed in Texas, Colorado, and Utah, its time to step up the fight for immigrant rights!

There are millions of undocumented immigrants living in the U.S. They lack rights, and are subjected to horrendous working and living conditions. Big business and their Wall Street financiers welcome this cheap labor because it props up the economy, keeps wages down and brings in big profits.

With the economy mired in crisis, right wing populists are tapping the discontent by blaming immigrants. Native born workers face many problems in the U.S.  jobs, healthcare, home foreclosures, etc. But, immigration is NOT the source of these problems. Wed be better off kicking out the thieving Wall Street banksters!

The pro-corporate Democrats have condemned the bill in Arizona. But the Democrats currently support a bill in Congress calling for guest worker programs that create a permanent exploited under-class. The bill also furthers repression of immigrants, deportations and border militarization. Yet, it only provides for a limited and slow path to citizenship for a section of immigrants.

People come to the U.S. without papers because the same corporations that dominate U.S. society also dominate other countries like Mexico. Global capitalism creates the same fundamental economic problems we face here in the U.S. but on a far worse scale in other countries. Faced with horrendous poverty, millions of workers in Latin America and around the world chose to leave their homes and come to the U.S. in a desperate search for work.

Capitalism uses the immigration issue with U.S. workers the way that throwing sand in the eyes is used in a fight. In reality, immigrants and native born workers are allies, not enemies. The attacks on the rights of immigrant workers and people of color threaten to undermine the ability of working people everywhere to effectively and collectively resist Corporate Americas onslaught against jobs, education, and public services.

We need to build a mass movement uniting immigrant and native-born workers.