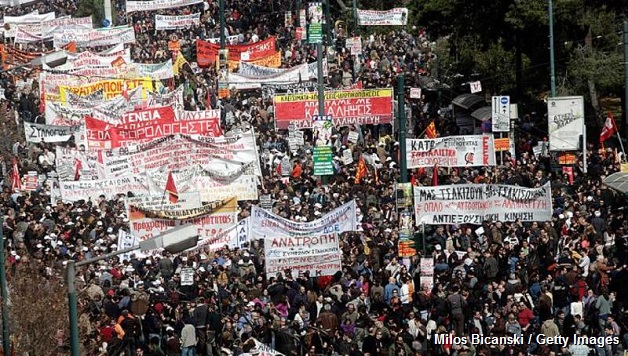 The worst capitalist crisis since the 1930s has led to increasing crises and change across the world. In the last months, Greece has been at the epicenter of turmoil in Europe, which now threatens the very core of the European Union.

The 11th-hour agreement by European governments on March 25 to provide a rescue plan for the Greek economy in order to assuage the currency markets has been applauded, but it also highlighted the sense of foreboding spreading among capitalists internationally.

On March 11, Greece was again brought to a standstill by the third general strike in a few weeks against the government’s third draconian austerity package since the start of the year.

The action hit 90% of public sector and large private sector workplaces. In Athens, only parts of the train system worked, and then only to assist workers getting to and from the demonstration, a further display of the enormous power of the working class when it is organized.

Greece’s two union federations called the strike to protest an additional $6.5 billion package of spending cuts and tax increases recently passed by parliament under pressure from the EU directorate, taking total cuts to about $27 billion.

Pushed by the European Union and financial markets, Greece’s social democratic PASOK government is attempting to cut the budget deficit to 8.7% of gross domestic product (GDP) this year from an estimated 12.7% last year.

Public sector wages will be cut by 7%, and the Christmas and summer bonuses by 30%. Pensions will be frozen (over one million Greek pensioners get less than $670 per month). Sales taxes (VAT) will rise from 19% to 21%.

PASOK blames the legacy of the last right-wing New Democracy government, which it decisively defeated in 2009. The lack of decisive union and left opposition to the cuts means this line of argument is not challenged comprehensively.

The PASOK-dominated union federations (GSEE and ADEDY) are seen by the most politically active workers as only pretending to offer a fight for their members. But given workers’ anger, the strike movement will most probably continue against further pension reforms and tax changes.

So far, young people have not participated in a decisive manner. But this can change. In December 2008, the streets were ablaze with an eruption of youth anger against police brutality. Now, many university students are finishing exams and occupations are beginning against the consequences of education cuts.

Xekinima [the sister newspaper of Justice in Greece] calls for university occupations to spread into a mass wave of occupations in both universities and schools. Mass action committees should be formed and the youth should link up with workers’ struggles.

The strike action needs to be coordinated and expanded to a 48-hour general strike, with longer general strikes if the government does not back down. Workplace and community committees of action should be formed to coordinate and link up on a local, regional, and national level.

The left parties, such as SYRIZA and the Communist Party, should form a united front with a bold socialist program. This must include opposition to paying the national debt and demands for ending the bosses’ enormous tax avoidance, an immediate program of huge investment in health, education, housing, and infrastructure, and nationalization of the banking sector, public utilities, and the major parts of the economy under the democratic control and management of the working class. However, neither of these parties is fighting for such a program.

Only a left government, based on the needs and participation of the working class and youth and committed to implementing a transformation of society from capitalism to socialism, can resolve the deep crisis of Greek and international capitalism. In the coming period, we can expect to see a further intensification of the struggle in Greece where the working class and youth will learn important lessons that will drive them in the direction of a search for socialist ideas.

Xekinima is the Greek section of the Committee for a Workers’ International (CWI). Socialist Alternative is in international solidarity with the CWI. To read more up-to-date information on the events in Greece, go to the CWI website at www.socialistworld.net.