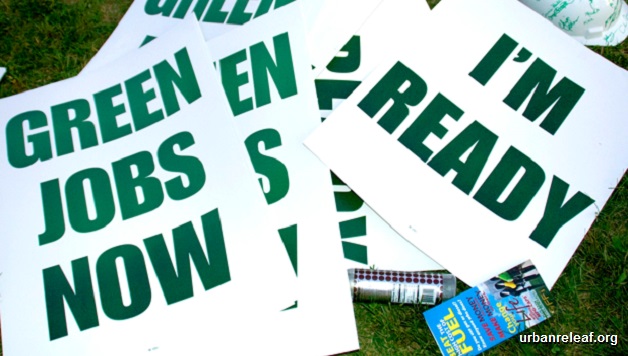 After last fall reaching its highest levels since the Great Depression, official U.S. unemployment has improved slightly to 9.7%, while actual unemployment and underemployment remain far higher. Last month, the highest ever long-term unemployment rate was recorded, with 6.5 million Americans out of work for six months or longer.

As the onslaught of the economic crisis continues, efforts to combat the environmental crisis have again fallen flat, this time at the Copenhagen Climate Conference in December, which ended with no binding agreement.

The clear need to address both unemployment and climate change was reflected in the passage of the $789 billion stimulus bill in February 2009. Yet, in spite of the Democratic Party’s rhetorical emphasis on the ”green-collar jobs” to be created by the bill, very few have in fact materialized.

Analysis by the Council of State Governments found that approximately 13,000 green jobs had been created as of October last year. While any green jobs are welcome, such numbers fall painfully short of the 15 million currently unemployed.

Mass transit, a key component in reduction of greenhouse gases, has seen the highest levels of ridership in decades, largely as a result of the economic crisis. While ridership levels have gone up, funding has gone down and increasing numbers of routes and transit jobs have been eliminated. More than 80% of transit systems have raised fares or reduced routes, while 68% have eliminated jobs or have plans to do so (American Public Transportation Association, 3/31/10).

A massive investment in renewable energy, mass transit, and energy efficiency is urgently needed to begin the transition toward a sustainable economy and to avoid the worst effects of greenhouse gas emissions. Such an investment would create far more jobs than Obama’s American Recovery and Reinvestment Act (or the far smaller $18 billion jobs bill passed this March), and would simultaneously spark the development of solar and wind farms as well as a vital expansion of mass transit.

Discussions of the environmental crisis in the corporate media tend to counter pose the environment and the economy, assuming the two to be in irreconcilable conflict. Yet science argues differently. A recent study by the Center for American Progress modeled the effects of a $100 billion green investment over two years.

In fact, a massive green investment, by simultaneously attacking both the environmental and economic crises, would be far more effective on both fronts than any economic stimulus legislation or climate change legislation yet debated in Washington.

Recent advances in solar technology have led to a minor boom in the industry, with solar farm projects underway in several states, including California, Florida, Nevada, and Arizona. However, these small forays into renewable energy production fall far short of the massive need to move rapidly away from fossil fuels.

Investment remains the missing ingredient in such a transformation. In order to become cost competitive with oil and coal, solar infrastructure needs to be manufactured on a far larger scale. Yet without massive public investment, no such economies of scale can be achieved.

Under capitalism, the long-term needs of society and the environment do not affect stock prices. Pollution also carries no weight in the marketplace. The impact of climate change in the future adds nothing to the cost of coal-fired power plant production in the present. Simultaneously, the current impacts of climate change on the global poor are not reflected in the price of electricity for wealthy multinational corporations.

The required investments to progress toward a sustainable, renewable-energy-based economy would create an enormous number of living-wage jobs, as would a commitment to environmental cleanup, and to overhauling and expanding mass transit.

Yet the ruling class’s commitment to short-term profits remains the principal obstacle to any such investment, just as its the need to undermine labor prevents full employment; both environmental crisis and unemployment are permanent features of a capitalist economy.

The realization of a genuinely sustainable economy based on living-wage jobs is inseparable from the struggle to establish democratic socialist planning. Only the victory of the working class over the myopic destructiveness of capitalism can overcome economic and environmental disaster and ensure a viable future for humanity.