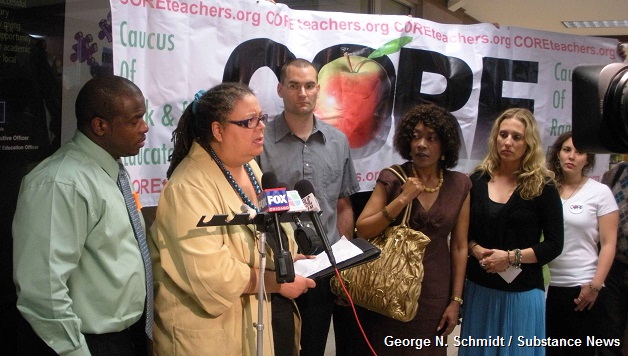 CORE – the Caucus of Rank and File Educators – is a group of teachers who work for the Chicago Board of Education and who recently put together, through a democratic internal election process, a slate that is challenging the incumbent leadership of the Chicago Teachers Union in the elections this May.

On their website, http://coreteachers.com/ CORE put forward a 5-point platform:

Justice: What led to the creation of CORE?

Kristine Mayle: CORE was started by a handful of people who had not been respected or represented by the Union. For example a teacher who went to the Union because his school was threatened with closure, and instead of fighting the closure and defending all of those jobs, all they told him was to “get your resume together”.

We’re new to this. We fought school closures by going out and forming bonds with communities, parents and students. We engaged with everyone that was affected.

We saved 6 schools last year and 6 this year. Going to the closure hearings we saw that the Board didn’t listen to what the people said. So we went to every hearing. We prepped people. Those hearings went from a few people protesting and being ignored to the Board having to face a lot of angry people and that had never been done before.

When my school, De La Cruz, was threatened we got a bus together to go to the hearing. There was a group called the Pilsen Alliance, which was part of GEM [the Grassroots Education Movement] – really a parent and community group – who told us what kind of evidence we needed. They saved us for a little over a year and in that time we learned a lot. This is because by fighting back, we were able to get the school phased out rather than closed outright.

One of the really big arguments we were able to raise this year was the question of gang boundaries. None of this had ever been considered by the Board until we brought it up. It was incredibly dangerous, for example, when Austin High was closed they sent kids to Clemente. Fighting increased overnight because these were kids from completely different backgrounds, their brothers and uncles were in gangs and they were transferred into another gang’s territory. The same thing happened at Hyde Park Academy when they closed Englewood. This year the Board brought their Head of Security to the hearings but he couldn’t tell us how he could protect these kids.

Nobody can learn under these conditions. When Orr High was restructured – the official term is turned around meaning the school was handed over to an outside group and all of the teachers were fired – some of those kids just never showed up again, they dropped out of the system entirely.

Justice: Before CORE, did anyone from the teachers’ union show up at these hearings?

KM: Well, Debbie Lynch [President of the Chicago Teachers Union (CTU) from 2001 to 2004] is saying that she led protests against Renaissance 2010 when it was first set out. But the present leadership, who are now near the end of their second term, never showed up until after CORE led the way. And if you ask them, instead of taking responsibility for their own inaction, they blame the membership for being “complacent”. We showed that was false last year. We had 1,000 people out in the street in January 2009 and again a month later.

We’ve mobilized and organized. If you want to speak at a Board of Education meeting you have to be there at 125 S. Clark St at 6:30am on a weekday, for a meeting that doesn’t start until 10:30, because the Charter schools stack the meetings with busloads of their supporters.

When De La Cruz closed, the Board said the school was crumbling and would have to be torn down. The day we were moving out, they had crews in there fixing the floors which we had been trying to get done for years. That was in June of last year. In August the Board convened an emergency meeting because two charter schools run by United Neighborhood Organization really were falling down, and the Board agreed to rent them the building De La Cruz had occupied – for a rent of $1 a year.

Justice: Former Chicago Public Schools CEO Arne Duncan is now the U.S. Secretary of Education and has a clear program of promoting privatization. In your election flyer you criticize the incumbent leadership for “making contributions to politicians who have destroyed our job security”. What will CORE do differently?

KM: In the debate earlier this week our candidate for President, Karen Lewis, proposed that if elected, we would put a motion before the membership to debate and decide whether to take our PAC [Political Action Campaign] money away from these politicians and putting it into the strike fund instead.

In my opinion we need to cut off money to people like [State Senator] Reverend Meeks. He’s the Chair of the Senate Education Committee who runs his own private church school and is promoting vouchers. When he came out and said the Chicago Teachers Union was the biggest gang in Chicago, all Marilyn [Stewart, the incumbent CTU President] did was to call him up and “demand” an apology! Now Marilyn is telling us to make calls supporting Senator Heather Steans’ bill to end enforced City residency on Chicago school teachers. We should have nothing to do with anything that comes from the Steans family. They’ve made it clear both on pensions and on charter schools that they are our enemies and we should not support them.

We don’t need union “leaders” who are only interested in living the good life for themselves. None of us sought Union office for its own sake. We all want to teach! But we found out that this is what we have to do to defend that.