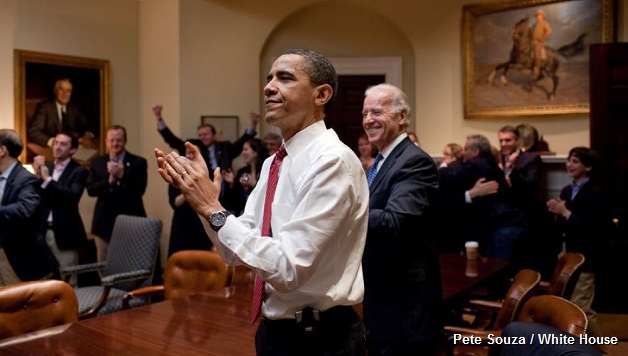 There is a palpable feeling of euphoria that extends beyond Washington over the passage of what is known as the Obama Health Care bill in the House of Representatives. The U.S. Health Care Act passed with a narrow majority of 219-212 with not a single Republican vote in favor  despite Obama’s and the Democrats’ efforts to make the bill as attractive as possible to the conservative Republican base. There is something to be said about scoring a victory against the Tea Partiers and the frenzied right-wing demagogues that seemed to have captured the airwaves the last few months. But, sadly, it’s a hollow victory.

One reason for the general enthusiasm is the limited understanding of the Act. The facts are drowned in the sound bites about universal coverage, lower costs, and no more denied coverage due to illness or pre-existing conditions – claims that are grossly overstated. In fact, the greatest achievement of the recent debate was in confusing the public and deflecting attention away from the real problem: profit-driven medical care. The current bill does nothing to change that, and over time many of those now welcoming it will see its severe limitations.

Unfortunately, the big winner in this battle has been the health insurance corporations. Corporations don’t exist to provide products or care. Their primary purpose is to produce profit and most preferably increased profits. The only way to do that is to either deny care to the sick or increase the cost of coverage. The health insurance industry has chosen to do both  and no one has stood in its way.

Physicians for a National Health Plan (PNPH) likened the new plan to an aspirin dispensed for the treatment of cancer. As Dr. Marcia Angell from PNHP put it, it’s hard to find a solution if you lose sight of the cause of the problem and attempt only to cure the symptoms. The cause, the cancer, is the for-profit system which dispenses health care as a market commodity according to the ability to pay.

The symptoms are millions of uninsured, uneven coverage, sky-rocketing costs, lower life expectancy, and tremendous waste. More than 1,200 insurance corporations are involved in this industry, each with its own staff and operating costs  not to mention its own insatiable appetite for profit. On the other side, health care providers need to keep an army of office personnel just to deal with the insurers. These add nothing to the quality of care, but add plenty to the overall costs.

So how much of the problem will be cured by the Act? Not much.

Lost in the hype are facts such as:

The few progressive elements of the bill, such as extending the age parents can cover students under their insurance to age 26, or extending Medicaid to more people, which will benefit some people, do not constitute a fundamental transformation of the health care system, and are countered by other regressive aspects of the bill. These could easily have been passed as stand-alone laws.  The Act not only fails to address the underlying problems, but it expands the role of the insurance companies. For the first time, there is legislation that establishes for-profit health insurance as mandatory for the majority of the population.

Obama and the Democrats

From the beginning of the health care debate the Republican strategists prepared to go on the offensive and hit the ground running. The insurance lobby opposed reform, even when it was obvious it would actually enrich them. Republicans lined up behind them, denouncing government-run insurance as un-American, socialist, treacherous, etc. They organized grass-roots campaigns, tea parties and dominated town hall meetings. Their message, reactionary and at times plainly racist, was heard loud and clear.

By contrast, the Democrats – who controlled both the legislative and executive branches – allowed the Republicans to dictate the agenda. Obama took a hands-off approach and let the conservative Democrats and Republicans set the scope of the discussion. Single-payer advocates were kept away from discourse. Insurance industry representatives were given prominent seats at the table. Universal mandate was the corner stone of the plan that started to emerge from the deliberations. The most radical proposal was the possible inclusion of a public option, which kept getting weaker and weaker until it was totally dropped, despite Obama’s assurances to defend it. The proposal that emerged included universal mandate, no public option, and taxes imposed on those with workplace benefits – something that would hit unionized workers who have won better health care provision from their employers.

In the last few weeks Obama himself stepped forward, proposed a slightly modified but nevertheless industry-friendly bill and campaigned vigorously for it. He held rallies and town hall meetings, he made speeches and used the media. He was reportedly working the phones till the last minute, assuring conservatives that his bill would continue to deny poor women the right to safe abortions. He made it clear that no threat to the domination of private insurance industry was included in the plan.

Most of the progressives in the Democratic Party folded, one by one abandoning single-payer or even the meager public option. The last man standing was Dennis Kucinich, who flipped two days before the vote after Obama personally appealed to the voters in his district. Obama had no concessions to offer to the liberals but got their vote. From the Republicans he failed to secure a single vote, despite the concessions. So, the Democrats managed, once again, to single-handedly pass legislation tailored to the needs of big business, much like the stimulus package of 2009, the bailout of 2008 and the credit card industry reform of 2010.

Obama showed that he is capable of using his position and his popularity to campaign for change, but he chose not to until he had a totally ineffective bill to fight for.

The economic crisis accentuated the problems high insurance costs were causing not only for families, but for whole industries. Polls showed the vast majority of Americans were in favor of reform. A majority even favored a single-payer system. The demand for radical reform was getting stronger.

The Obama administration allowed the insurance industry a prominent voice in the debate. By the end of the process the proposals did not pose much of a threat to the industry. As long as they managed to avoid competition by government-run non-profit alternatives, they were in the clear.  But if the insurance industry had embraced any of Obama’s proposals and called off the bitter campaign of resistance, they would have allowed proponents of real change enough room to organize and strike back. The only way to avoid that was to keep the other side, i.e. progressive forces, on the defensive by denouncing even the most moderate change. The strategy worked wonderfully. The louder their voice, the more the leaders of the Democratic Party were trying to appease them. The Democrats did what they always do best: They silenced their left flank and kept moving the agenda to the right.

The media played their part too: Fox News set the pace and the rest of them followed. They gave the tea partiers and the lunatic right their full attention, while they virtually ignored calls for radical reform  much like they had ignored the anti-war movement for the last seven years. Every stunt the Republicans staged was blasted in the news and amplified, whether it was disruption of town-hall meetings or teary-eyed TV show hosts.

A Socialist Approach to Health Care

From the start, Socialist Alternative characterized this bill as inadequate compared to what is needed – a single payer system. How would working people be motivated to organize support for a bill that included taxes on their existing health insurance coverage?

The only proposal that could bring about meaningful reform was the demand for a single-payer system, or Medicare for All. Unions and community organizations could have mobilized their members, much like they did during the 2008 presidential campaign. With a proposal for real change, millions of workers and their families in thousands of communities around the country could have been inspired to build a grass-roots campaign for fundamental transformation of the health care system in the U.S. A movement could hold rallies and educational meetings, go door-to-door to raise the consciousness of their fellow workers and their neighbors and recruit more activists to the cause.

Some argue that this measure is a step in the right direction and that improvements can be made as this law comes into effect in stages over the next eight years. Certainly this is not the end of the matter. This law’s attempts to entrench a profit-run health care system will be undermined.   Experience and disappointment will mean that demands for profit to be totally taken out of health care and for public provision will increase.

A lesson to be learned from this is we can’t depend on the Democrats to affect change. At best they are ineffective, at worst they are the same as the Republicans.

But we should not allow the Republicans to benefit electorally in November. It’s not too late to form a coalition of unions and communities and stand independent candidates determined to fight among other issues for single-payer health insurance, an end to corporate subsidies and an end to the war. We need candidates that will defend the rights of working people against those of big business.