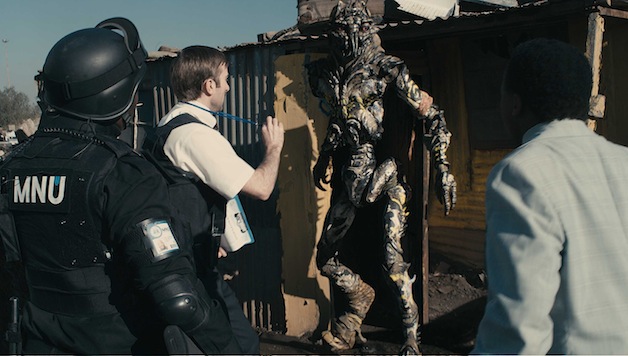 In District 9, the new science fiction action thriller by first-time director Neill Blomkamp, an alien spaceship breaks down above Johannesburg, South Africa, leaving its inhabitants stranded on Earth, starving and impoverished. Blomkamp uses this set-up as a metaphor both for apartheid in South Africa and, more explicitly, for current immigration politics, replacing the “illegal aliens” with actual aliens.

Rather than provide meaningful assistance to the aliens, the South African government houses them in an impoverished, overcrowded Johannesburg slum known as District 9. The slum is policed by private mercenaries working for the fictitious corporation Multi-National United (MNU). MNU is less concerned with the aliens’ welfare than in keeping them in line at minimal cost, which allows a group of Nigerian gangsters to take hold with the setting up of an illegal cat food ring. Ultimately, the anti-alien hysteria that is whipped up causes the government to relocate the aliens to District 10, a new camp 240 km away from Johannesburg.

The film turns the “alien invasion” clichés on their head. The insectoid aliens are made to look physically repulsive, with disgusting eating habits, but they are ultimately the most likable characters, while the clean-cut executives and buff private soldiers end up being the real monsters.

The main character, an MNU field operative named Wikus van der Merwe, is put in charge of distributing eviction notices. He does his job with a naïve sense of law and order that contrasts with the injustice around him. He occasionally protests the excessive violence of the private soldiers, but when the aliens refuse to sign the eviction notices, he gives in and lets them do their thing. Over the course of the film he does become more sympathetic, but that’s partly because of his accidental exposure to an alien mutagen that forces him to hide in the camp.

In addition to the references to apartheid there are more current references to immigration policy. In particular, there are parallels between MNU and the Wackenhut Corporation, an American security firm that ran private detention centers in the United States, South Africa and Australia until it was bought out by Group 4 Falck (now Group 4 Securicor) in 2003.

Wackenhut is most notorious for it’s Australian subsidiary, Australasian Correctional Management (ACM), which ran six refugee detention centers in Australia from 1998 to 2003. ACM hired racist thugs for its security, cut costs on training the aid workers, and boosted its profits by selling the refugees food at inflated prices, including Mars Bars for $4 a piece.

Australian immigration policy since 1992 required mandatory detainment of all refugee claimants and denied them access to legal representation since 1993. The camps were kept in isolated locations in the outback, ostensibly to protect Australians from foreign diseases, but in reality to make it harder for the refugees to fight back. All these have parallels in the movies. American viewers may also see parallels with the security wall on the Mexican border and the rise in vigilante groups like the Minutemen.

The movie excels at challenging xenophobia and anti-immigrant hysteria, as well as exposing the callousness and hypocrisy of those who facilitate it and profit from it. However, unlike, for instance, Ken Loach’s drama It’s a Free World . . ., it does not go into any detail as to the root causes of the mistreatment of immigrants. In particular, there’s no mention of the divide and rule tactics of the capitalists, pitting immigrants and native workers against each other, or the fact that harsh immigration laws, by making it harder for immigrants to improve their working conditions, make it easier for capitalists to use illegal immigrants to “steal our jobs”.

Similarly, while the movie ends with a vague hope that things will someday get better, it doesn’t give any clue as to how that might be accomplished. The main steps in that direction come from van der Merwe’s exposure to the mutagen, which causes him to experience the plight of the aliens, convincing them that their treatment by MNU is morally wrong. His method of fighting back involves using his mutant abilities to control a giant robot which he uses to throw dead pigs at people.

In reality, moral appeals only bring about minor change at best unless they’re made as a supplement to mass action of the working class, and mutant-powered giant robots throwing dead pigs at people have never proved an effective means of social change. Rather, what’s necessary is mass action by the working class to cut across the divide and rule tactics of the capitalists. That’s how apartheid was overthrown, and it’s how the abusive treatment of immigrants can be stopped.

Blomkamp has stated that he was trying primarily to make a science fiction movie about Johannesburg, and that the social commentary came afterwards. As such it’s forgivable that he doesn’t provide an in-depth look into the politics of immigration. Furthermore, as a movie, it’s well-acted and well-directed, and features some truly exciting action scenes. It’s definitely the best political movie ever to feature mutant-powered giant robots throwing dead pigs.