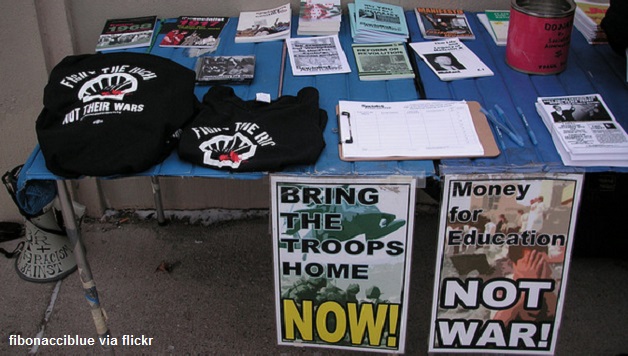 Socialist Alternative, along with Youth Against War and Racism, recently spearheaded a national student walkout against Bush’s war, mobilizing thousands of young people into political activity. Now we are mobilizing students to protest military recruiters in high schools, especially at the March 18-19 protests.

Unlike the Pentagon, our main problem is that we seriously lack resources! Of course, this goes with the territory of building a movement like ours, based on workers and young people.

For the March 18-19 protests, we need to raise at least $1500 to distribute 30,000 fliers. If we had greater resources, we could reach many more people with our literature, teach-ins, and protests, and we could establish more student clubs to challenge military recruiters’ access to schools. So, please, take a moment to donate, whether you can contribute $5 or $500.

Our Fighting Fund is Growing

Congratulations Socialist Alternative members! Over the last 8 months, for the first time we reached our Fighting Fund target of every member raising an average of $10 a month in donations from the public. This achievement shows that we are making progress building Socialist Alternative and that more members are consciously raising donations. It also reflects the growing support in U.S. society for our ideas.

Now that we reached the modest target of each member raising $10/month in donations from the public, the National Committee recently decided to raise our target to each member striving to raise $15/month on average for our Fighting Fund by May.

To hit this goal, each branch needs to raise awareness about the importance of fundraising, set a collective Fighting Fund target and a plan for each month, and provide brief updates at each branch meeting about the branch’s progress towards the monthly target.