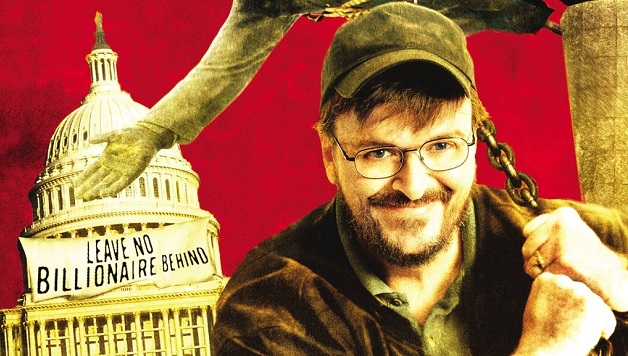 The main aim of Michael Moore’s hilarious and scathing new best-selling book, Dude, Where’s My Country?, is to empower a seemingly inert anti-war and anti-Bush movement. His great purpose is to reinvigorate the movement to take the necessary action to pry the United States from the “cold, dead hands” of the right-wing, corporate Bush regime. Unfortunately, in Moore’s estimation, all roads to accomplishing this goal lead back to the Democrats in 2004.

For the first half of Dude, Michael Moore examines the many fallacies and hypocrisies inherent in the Bush government’s “War on Terror,” attacks on civil liberties at home, and invasion of Iraq. He provides opponents of the president with an arsenal of facts, figures, and arguments to make their case against Bush and his policies. He asks perfectly reasonable questions such as: “Why have we never read a headline saying ‘3,000 killed by Multi-Millionaire?’ Why didn’t that become the reason for profiling potential terrorists? ‘Oh my God, a multi-millionaire killed 3,000 people! Round up the multi-millionaires! Throw them all in jail! No charges! No trials! Deport the millionaires!'”

The book argues that Americans shouldn’t fall victim to the fear of a terrorist threat from abroad, which Bush exaggerates and exploits. Instead, Moore shifts the focus towards the very real enemy threatening most Americans. “We need protection from our own multi-millionaire, corporate terrorists, the ones who rip off our old-age pensions, destroy the environment, deplete irreplaceable fossil fuels in the name of profit, deny us our right to universal health care, take peoples’ jobs away whenever the mood hits them.”

Moore explodes the myth of a country divided between minorities of extreme conservatives and “bleeding-heart” liberals with a majority of centrists wavering in between. Counting off an impressive array of statistics, he concludes America is decidedly left-leaning. When “88% of Americans have little to no trust in corporate executives, …58% think labor unions are a good idea, …8 out of 10 believe health insurance should be provided equally to everyone, …74% prefer treatment and probation for non-violent drug users, …83% say they are in agreement with the goals of the environmental movement, …and 59% think abortion should be decided between a woman and her doctor,” Mike’s conclusion sounds less like wishful thinking and more like a reasonable view of the United States.

With a clear majority of Americans opposing Bush’s policies, what does Michael Moore propose we do to deliver this country into the hands of the majority? Cozy up to Oprah Winfrey, Tom Hanks, or other wealthy “limousine liberals” and call on them to run for President. Or, if that fails, get out the vote for whichever Democratic candidate has the best chance of beating Bush in 2004.

But filtering the surge of anti-war and anti-Bush sentiment back into the Democratic Party is a dead-end approach. Moore should know better, given his passionate advocacy for Ralph Nader in the 2000 presidential elections and his relentless campaign against the corporate hold on the two parties. In his previous best-selling book, Stupid White Men, Moore maintained that he could never in good conscience vote for a candidate that supports the death penalty, doesn’t believe in universal health care, and wouldn’t raise the minimum wage to a living wage. Apparently, Michael Moore is willing to compromise these values if it means getting rid of Bush in 2004.

Moore is mistakenly focused on replacing “evil” Bush with a supposedly better leader instead of changing the capitalist system which compels both corporate parties to pursue wars, profits, and power at ordinary people’s expense. The time is now to harness the collective outrage and drive of popular movements to form an independent party to represent the majority of the population – the working class.

So who’s going to pick up the slack and popularize an independent workers’ party? Given Moore’s fast-growing popularity, the impact he could have in advocating for a new workers’ party would be tremendous, but I’m not holding my breath.

Moore’s recent book tour of 39 cities packed sell-out, overflowing crowds of five to ten thousand people a night. In many cities, there were thousands more who couldn’t get in. In Baltimore, for example, 4,000 people pounded on the door demanding to be let in.

Michael describes his biggest speaking tour yet: “All over America I saw tens of thousands of average Americans who don’t like their commander-in-chief lying to them in order to start a war. Not a night went by where I didn’t have parents or siblings of soldiers in Iraq coming up to me, many of them in tears, pleading with me to ‘do something’ to help bring their loved ones home from this war without end.

“What was amazing to me on this tour was that some of the biggest and most enthusiastic crowds were in hard-core Republican areas like Stockton, California and Wooster, Ohio. I get it when 13,000 show up and try to squeeze in as they did at Berkeley’s Greek Theatre. But when five or six thousand show up in places like Pullman, Washington (on the Idaho border) or Ypsilanti, Michigan, I’m convinced that there has been a shift, a real shift, in public opinion… That should give you some indication of the level of concern/frustration/anger in the country right now over what the Bush administration is up to.”