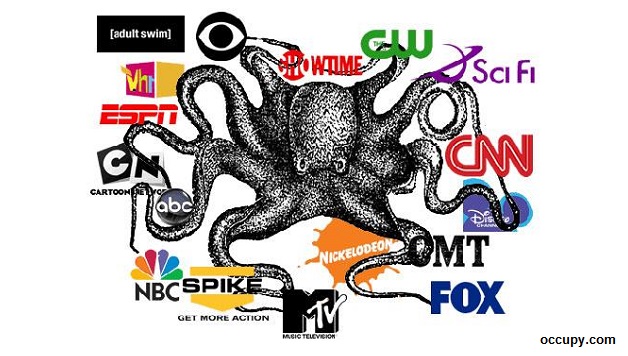 The Federal Communications Commission (FCC) just relaxed the rules restricting media giants from gaining yet more monopoly ownership of media markets nationwide. According to a dissenting FCC commissioner, the new rules allow “a single company to own in one city up to three TV stations, eight radio stations, the cable TV system, cable TV stations and the only daily newspaper.” The supposedly “outdated” rules prevented most cross-ownership of various media in one city.

According to Commissioner Michael Powell, Colin Powell’s son who heads the FCC, 500,000 comments came in from the public. 97% of those were against these new rulings. Bucking a virtual unanimity of public opinion, Powell said, “Our actions will advance our goals of diversity and localism.”

Perhaps the 2,500 business trips to the Commission over the last eight years by media giants informed Powell more than people’s widespread concerns. The new rules were energetically sought by the mega-media companies, and they are consistent with the accelerated consolidation of media companies worldwide.

The explosion of public anger may not have swayed the FCC members, but it has persuaded a bipartisan group of Senators to consider legislation reversing many aspects of this ruling. Having already given two massive tax cuts to the rich, these politicians are terrified of being caught up in a massive voter backlash. But they surely will look for a more favorable future opportunity to push through the agenda of their corporate media patrons.

A long train of rulings, culminating in Clinton’s giveaway of public airwaves in the ’90s, ushered in the current era of merger-mania. Not to be outdone, Bush is driving towards complete monopoly for the giants of infotainment and the buying up and pushing out of smaller operations. AOL Time Warner, Viacom, Disney, G.E., Sony and the News Corporation own the overwhelming majority of production outlets people in the US (and increasingly worldwide) see and hear.

A quick look at news content before and after the most recent devastation in Iraq would find the big six repeating the same disinformation from the Pentagon. Even differences between a National Public Radio newscast and a conservative radio’s news, in regard to the pentagon’s “news” output, is are largely in presentation rather than content.

Media, like all production under capitalism, tends towards monopoly. Women, minorities, labor, and other groups and points of view have little to no voice. A corporation which owns the news production in a region needn’t worry about diversity or completeness in information.

Why don’t the giants compete with each other in political content? Because the big corporations who buy the advertising – and own the media – set the agenda. Big business uses its ownership of the media to hide its attacks on workers and the realities of capitalism and to isolate any opposition. The worker-voter trying to make decisions must deal with a world view presented by Disney, Viacom, etc….

The proliferation of new technology has meant little if any spread of a different outlook. You could learn about the “clear and present danger of Iraqi weapons of mass destruction” through cable TV, the web, or on your old radio, even if evidence of such weapons were yet to be found.

No reforms of the system – and there have certainly been attempts through the decades – will bring about reliable news. All of America’s wars required hype and lies to get public support. Selling wars, tax cuts for the rich, and budget cuts for the poor isn’t much different than selling soap, cars, and lifestyles.

Monopoly, crushing of dissent, and putting everything up for sale is what capitalism requires. Socialist Alternative is campaigning for the mass media to be taken out of the hands of the wealthy elite and transformed into a public resource, open to everyone. Access would be granted to every social and political group based on the amount of public support they have.

The only way to counter the lies and deception of the capitalist media is for labor, anti-war, community, and student movements to build our own independent mass media. In particular, the AFL-CIO union federation has the hundreds of millions of dollars necessary to run its own daily local and national newspapers, cable TV, and radio stations. Justice also believes there is a vital need to expand the socialist media to put forward an independent working-class perspective on all issues and equip activists with the analysis and program necessary to take these movements forward and end capitalism.

Just the Facts:
What the Media Won’t Tell You

The media watchdog group Fairness and Accuracy in Reporting (FAIR) surveyed more than 300 major news networks’ interviews during the build-up to the Iraq war. Less than 1% presented an anti-war viewpoint.

FAIR’s review of ABC, NBC, and CBS nightly newscasts in 2001 found that 92% of all US news sources interviewed were white.