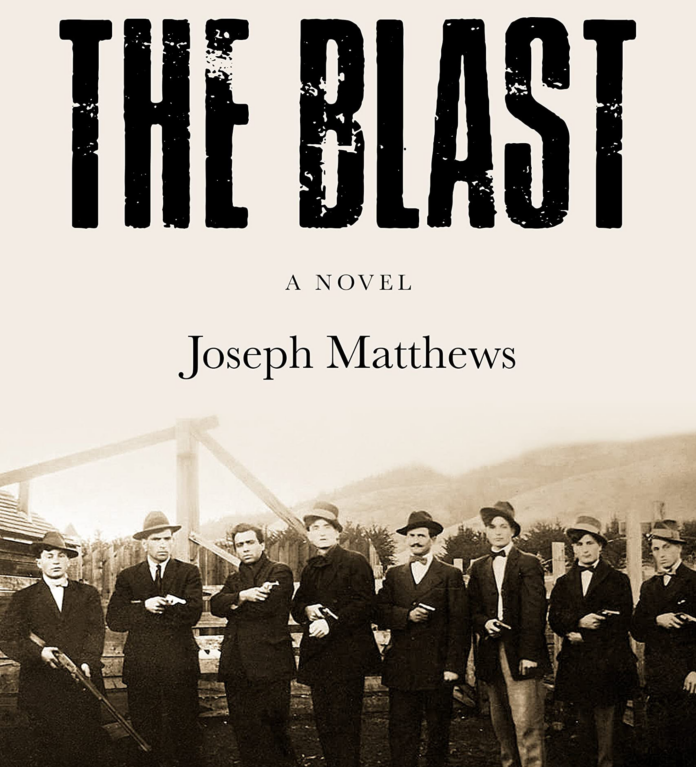 We’re living in an age of growing labor struggles, but also of intensifying capitalist reaction and imperialist conflict. With those hopes and anxieties, readers will resonate with The Blast: A Novel, the latest book by writer and activist Joseph Matthews. A work of historical fiction, The Blast looks at a different age of labor struggles, capitalist reaction, and imperialist conflict.

The setting is San Francisco in 1916. Europe has been plunged into the imperialist slaughter of World War I. The United States hasn’t yet entered the war, but is paving the way through a business-backed “preparedness movement.” Meanwhile, the city’s workers are waging their own class war against the capitalists on the docks and railroads.

The Blast centers around two characters. Kate Jameson is a Boston-based widow hired by U-1 (a real historical intelligence group which predated the CIA) to investigate the level of support for the war in San Francisco’s business community. Meanwhile, Baldo “Blue” Cavanaugh is an Irish-Sicilian anarchist drifter and former prize-fighter who previously fled San Francisco but returned to support the railroad strikes led by real-life socialist labor leader Tom Mooney.

Connecting the two characters is Kate’s daughter, Maggie, who previously ran off to San Francisco to start a new life. Kate’s real motive for accepting the U-1 job was to track her down, and Blue’s time in San Francisco is partially devoted to developing a relationship with her.

Between these characters, the reader is given a rich portrait of a city on the verge of war. Blue’s adventures show us the San Francisco of the working-class militants, fighting to unionize the railroad industry and coming up against the might of the capitalist state. Kate’s adventures show us the city’s business elite callously working to crush those same struggles.

Throughout this is the growing drive to bring the U.S. into the war, and attempted resistance to that war drive. By the time the book is set, the international socialist movement had been thrown into crisis when the leaders of the Second International abandoned socialist internationalism to support their own country’s bourgeoisie in the war. In the U.S. that crisis was postponed by U.S. imperialism’s late entry into the war. But the “preparedness movement” threatened to end that reprieve.

A particularly harrowing scene is a flashback to Kate’s deceased husband’s experiences in the Philippine-American War of 1809-1902. This was the war that first revealed the naked imperialist character of the U.S. It also saw the military pioneer the use of torture techniques, such as water-boarding, that became notorious in the Iraq War over a century later. In The Blast it serves to show the reader what’s at stake as the country is driven into a new war.

Alfred Hitchcock once remarked that suspense isn’t about having a bomb suddenly go off, but about showing the audience a bomb and letting them wait for it to go off. The Blast expands that model for the duration of a book. The plot itself is a slow burn, with a number of side stories, flashbacks, and digressions. Blue and Kate’s adventures serve more to acquaint the reader with the city’s labor battles, business galas, boxing matches, feminist physicians, and arguments between radical Italian immigrants about the right way to cook pasta. The reader is treated to a society on the brink of crisis and is waiting for the bomb, both figurative and literal, to go off.

Figurative, because the U.S. will eventually enter the war, unleashing a wave of reactionary, patriotic propaganda and state repression, with mass arrests of radicals. Literal because, well, there’s a reason the book is called The Blast.

The literal bomb is the real-life Preparedness Day bombing of July 22, 1916. This was a terrorist attack on a “preparedness” rally carried out by the Gruppo Anarchico Volontá, which killed 10 and wounded 40. Volontá was an Italian anarchist group operating on the principle of “propaganda of the deed,” the carrying out of terrorist attacks in a misguided attempt to spur the masses into action.

Marxists have historically opposed “propaganda of the deed,” not out of liberal moralism, but because it disorients the masses while strengthening the propaganda of the state. And that’s exactly what happened with Preparedness Day bombing, both in real life and in the book. Rather than spurring the masses into action, it empowered the capitalists to ramp up repression. The railway bosses framed strike leader Tom Mooney and had him sentenced to death. Under the impact of a mass campaign, the sentence was commuted to life in prison. But he wasn’t freed until 1938. And, as Matthews points out in an afterword to his book, “It wasn’t until the 1930s that San Francisco’s labor movement returned to its former strength.”

If there’s a limitation in The Blast, it is that its portrait of 1916 San Francisco doesn’t include the broad mass of the working class. While Blue is working in solidarity with the railway strikes, he isn’t a railway worker himself. He’s an independent anarchist who makes money on boxing matches. He rejects the recklessness of the Volontá group and the conservatism of the union bureaucracy. But he spends more time in the activist milieux of anarchist and socialist revolutionaries than in the working class itself. And the book acts accordingly.

It would have been nice to see depictions of the railway workers themselves as Mooney’s radical unionists and conservative bureaucrats vie for their support while the bosses fight to crush them. This limitation may stem from the author’s own anarchist bent, but it’s a minor gripe.

What matters is that Matthews provides an excellent snapshot of the class struggle in a particular time and place: one that has a lot of similarities with our own time. He takes the big political events that shape society, and gives them a human face that makes them real.