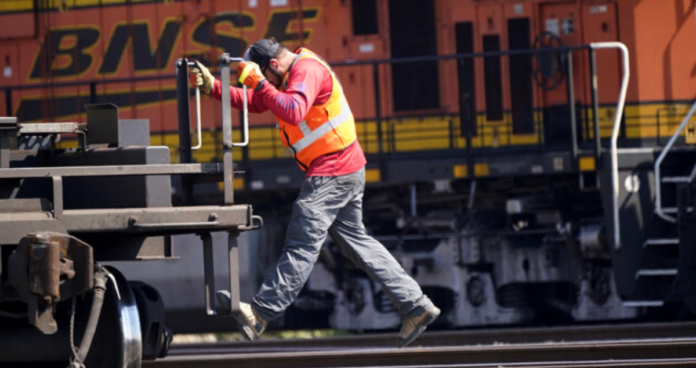 Working on the railroads has always been challenging, but until the last several decades, it was a well-paying job with down time. You had a full crew on each train, and your schedule was somewhat predictable.

However, in the last several decades, working the railroads has become almost unbearable for the more than 100,000 workers who keep nearly 30% of American goods moving. In the dusty corners of the internet, you can find forums from 10 years ago where railroad workers urge workers in other industries to think long and hard before joining them on the tracks.

In January 2012, a railroad worker wrote: “You have no life, lose your friends, and cannot plan anything. Your life really is the railroad. Imagine walking a 2 mile long train in the 100 degree heat, 0 degree cold, pouring rain or snow, then after being on the road 12 hours going home and being called right back after 10 hours. If you already have a decent job, I would strongly advise against it.”

This is the context for the years of negotiations between 12 unions representing 115,000 railroad workers and the handful of corporations that control 90 percent of freight rail traffic (as well as the tracks that carry most passenger trains). These negotiations have now been brought to a screeching halt under the leadership of the self described “most pro-union President leading the most pro-union administration in American history.”

Workers across four unions which together represent a majority of the thoroughly overburdened workforce – the Sheet Metal, Air, Rail, and Transport Workers’ Transportation Division, the Brotherhood of Railway Signalmen, the Brotherhood of Maintenance of Way Employees-Teamsters, and the International Brotherhood of Boilermakers – had rejected a proposed contract. But the votes of 80 U.S. Senators and 290 U.S. Representatives were enough to enforce the deal that the rail magnates wanted and prevent workers from striking for a fair contract.

This outcome was the one the bosses had counted on from the start, knowing that they hold both political parties in the palm of their hands.

“As a proud pro-labor President, I’m reluctant to override the ratification procedures and views of those who voted against the agreement,” Biden said in a tweet the day before the sell-out vote in the House. “But in this case – where the economic impact of a shutdown would hurt millions – I believe Congress must use its powers to adopt this deal.”

Conditions on the Tracks

In the 90s, as giant rail corporations grew, gobbling up smaller lines and consolidating a monopoly on the movement of goods across the country, these rail giants implemented a major squeeze on their operations and workforce, professionally referred to as “Precision Scheduled Railroading” (PSR).

PSR meant routes were slashed, railyards were closed, trains were lengthened and expected to run for much longer stretches of time, and tens of thousands of workers were laid off – placing the burden of increasingly difficult work on a smaller workforce.  In just the last several years, railroads have cut as many as 35 percent of workers in certain titles.

Today, these longer freight trains are in some cases operated by a one-person “crew” whereas historically, a five-person crew would communicate up and down the train. Now, just one rail worker is responsible for operating the train, while communicating on the radio with train dispatchers, signal maintainers, foreman, other train crews, as well as maintaining all the paperwork – including keeping track of all hazardous materials onboard the train.

If that single worker were to have a heart attack on the job, or even just get sleepy after a 12-hour stretch with nothing more than federally mandated breaks, the consequences could be catastrophic. And after making it through the shift, they can expect to get a few hours of sleep at a motel in the middle of nowhere while keeping their phone on full volume in case they’re called back to work.

In 2013 a train with 72 tank cars full of crude oil experienced a brake failure while stopped outside the town of Lac Megantic, Quebec. The train ran down the tracks, derailed, and exploded in the center of the town, destroying it and killing 47 people. This almost mile-long train had only a single engineer; a crucial brake stability test could have prevented the accident, but it would have required two employees to do it. After this disaster the Canadian government reversed itself and mandated two person crews for trains carrying hazardous materials.

It is in this dangerous context that rail corporations are making record profits. In 2016, amidst the flurry of cutbacks at Union Pacific, the second largest railroad in the U.S., CEO Lance Fritz cut himself a $10 million check. And this is nothing compared to the money the bosses give themselves today. In the last three years, the CEOs of the five largest rail conglomerates have been paid more than $200 million. Wealthy company shareholders have been given nearly $200 billion in stock buybacks and dividends.

Democrats Call The Vote To Break The Strike

So how does all of this lead us to today, where – under the direction of Joe Biden – Democrats and Republicans in Congress joined hands to crush rail workers’ impending strike?

To understand this betrayal in its entirety, we have to look at the establishment of the Railway Labor Act (RLA) in 1926. The RLA’s legislative ancestry can be traced as far back as the strikebreaking warfare of 1877.

The law allows the president to intervene in labor disputes that “threaten substantially to interrupt interstate commerce.” This is what Biden did in September, with the full backing of the unions’ toothless misleadership. His administration brokered a new Tentative Agreement between the rail magnates and the 12 unions representing rail workers.

The agreement included modest wage gains, though in the context of rampant inflation any wage increase without a Cost of Living Adjustment (COLA) amounts to a pay cut, but did not give workers any paid sick leave – a key demand of rail workers who currently have zero guaranteed sick days.

When the Biden-brokered TA was sent to rail workers for a vote, it was defeated in four of the 12 unions, representing nearly 60% of all rail workers. This meant that a strike was back on the table, sending the Democratic Party leadership into crisis – knowing it’d be on them to crush the strike at all costs. This is something the Democrats are familiar with though, Democratic presidents have crushed strikes in each of the following years: 1941, 1945, 1978 (twice), 1994, 1997, and 2011.

Who Voted To Crush The Strike (And Who Didn’t)?

It is a matter of principle that anyone that votes to break a strike is no friend of working people. There’s no amount of “strategic justification” that can undo that fact.

Striking is the single most powerful tool workers have to win their demands because it brings profit-making to a halt – and that’s the one thing that scares billionaire bosses the most.

For proof of this we can look to the U.S. postal workers strike in 1970 where 200,000 federal postal workers took illegal strike action – and won. They overcame Nixon’s attempts to use the national guard to break the strike, they overcame their union leadership’s conservative hesitancy, and they won. They secured a significant pay increase, faster step increases, a COLA, and ended the practice of postal workers being forced to sit in a “swing room” unpaid, while waiting for work.

Politicians across the aisle, but under the leadership of the Democrats, took away workers’ best weapon to win their demands. And this is what capitalist politicians are there to do. They are not neutral individuals, the entire election system binds them to their funders so that they will defend the interests of billionaires against those of workers.

Shamefully, “progressives” in Congress were accomplices in this. Any notion that AOC or Jamaal Bowman, Democratic Socialists of America (DSA) members in the House, can be considered “socialists” should be fully dispelled at this point.

It’s crucial that workers everywhere learn the lessons of this betrayal, first and foremost that neither the Democratic nor Republican parties will ever prioritize the needs of workers over their system’s thirst for profit. They are both firmly-held tools of the billionaire class. Workers deserve a political voice of our own.

Second – and connected – union leaders have a well established practice for many decades of fastening themselves to the rear end of the Democratic Party. In the 2020 election, the Teamsters – who absorbed BMWED (the third largest rail union) in 2004 – gave over $2.1 million to Democratic candidates. And for what? To get sold down the river. In fact, over the summer Teamsters leaders Sean O’Brien and Fred Zuckerman “welcomed” Biden’s intervention (though they later attempted an about face).

We need an active rank-and-file movement within the unions pushing for genuine internal democracy – including democratic oversight over the spending of union members’ dues money – as well as for political independence from both parties of big business. Already there are very positive signs that this is afoot in the rail unions. Just this week, members of the Brotherhood of Locomotive Engineers and Trainmen (BLET) voted to oust their union president Dennis Pierce as punishment for his collusion with Biden.

The consequences of this betrayal will be brutal for railroad workers who will now be forced to continue working in hazardous conditions. But it can also serve as a wakeup call for the left and labor movement to fight for a fundamentally new strategy, one defined by political independence, genuine democracy, and class-struggle militancy.