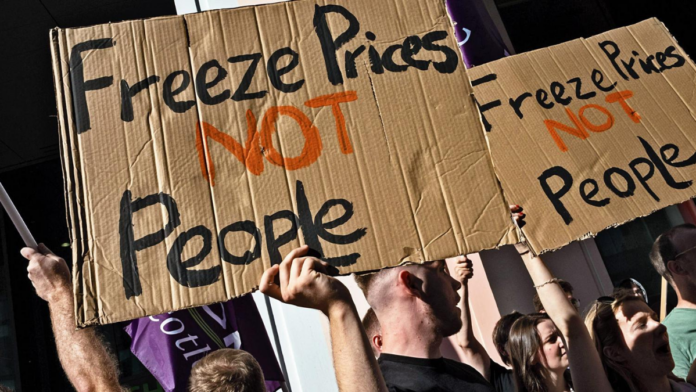 As we go to print, workers across Europe are taking to the streets against record breaking energy prices, food poverty, and a dramatic reduction in purchasing power caused by an inflation crisis wreaking havoc worldwide.

The global consumer price index doubled over 2021, and is expected by the IMF to peak at 8.8% percent at the end of 2022. As global crises become ever more serious, it is working-class people bearing the brunt of price increases in food, energy, and shelter while corporations make record profits. But the bubbling pot of anger and discontent in society can only be contained for so long before it comes to a boil. Verisk Maplecroft, a risk consultancy firm, reported an “unprecedented rise in civil unrest” throughout 2022. This trend will continue to escalate as working class people are backed into a corner with no choice but to revolt.

Already, outcries from below spurred by economic crisis have ousted former Sri Lankan president Gotabaya Rajapaksa, and forced the resignation of Britain’s Prime Minister Liz Truss after just 44 days in office, an event that the New York Times warns “sent perhaps the clearest signal yet that political peril awaits those who fail to address inflation and the erosion of living standards.”

Why Is This Happening?

The shock of the COVID-19 pandemic sent global supply chains into disarray. The war in Ukraine cut off access to a major world source of grain and fertilizers, disrupting the world food supply – a crisis made worse by extreme weather caused by the climate crisis impacting agriculture. Furthermore, already untenable wealth inequality has only exacerbated the severity of this crisis and its impact on workers.

The causes of this economic crisis are capitalism’s lack of preparedness for the pandemic and its inability to come together with a coordinated global response, an imperialist bloodbath ravaging Ukraine that is not in any working people’s interests, a climate disaster caused by corporations and billion-dollar dirty energy industries, and ultimately decades of neoliberalism which decimated social services and drove wages into the ground. None of this is working people’s fault, but nevertheless we’ll be shouldering the burden, and no corner of the world is left unscathed.

In Europe, the cost of living crisis is especially painful. Heavy reliance on cheap Russian oil and gas by a number of countries has meant Western sanctions have had a major impact. For many working-class people, keeping up with bills and putting food on the table has gone from just manageable enough to unbearable or impossible. With a winter temperature drop just around the corner, millions of  households will be forced to choose between heat and food. Average monthly energy bills for UK households are projected to reach £3,554 ($4,043.56), and €500 ($495.37) in EU countries – a threefold increase from 2021 costs.

But workers have been showing their willingness to fight. Britain’s “Enough is Enough” campaign is galvanizing workers and youth by the thousands as a lightning rod for fighting back against the cost of living crisis. Its five-point program calls for real pay raises accounting for inflation, slashed energy bills, an end to food poverty, decent homes for all, and taxing the rich. That tens of thousands have flocked to this program shows the importance of clear and bold demands to cohere movement forces. In addition to these popular working-class demands, in some areas where members of our sister organization Socialist Alternative have played a leading role, Enough is Enough has followed up with a program of escalating action, with initiative from major trade unions acting in coordination with the broader movement.

On October 1, tens of thousands of postal workers, rail workers, and dock workers went on strike, joined by thousands of supporters. This was followed up with new strike actions announced within days against privatization and austerity. On November 5 about 15,000 people marched through London as part of the People’s Assembly Against Austerity.

The railworkers’ union and its leader Mick Lynch, as well as other major trade unions are playing a key leading role in the effort, while also maintaining Enough is Enough as a broader campaign that has the potential to incorporate workers, activists and young people not already organized in the unions as part of the movement.  The involvement of a number of major unions is an essential component of the movement in Britain, but workers can’t afford to wait around for the leadership of the Trades Union Congress (TUC) to organize action on the scale needed. As our sister party in the UK wrote: “By building unity and coordination between unions and campaigns such as Enough is Enough, we can prepare for a national day of coordinated action with hundreds of thousands of workers on strike together. Enough is Enough and other campaigning groups should be built as platforms to bring together workers, tenants and students to broaden the protests and strikes that are taking place.”

Elsewhere in Europe new fights are kicking off. In Belgium, a general strike was called for November 9, called by the trade union FGTB/ABVV, and joined by the CSC/ACV union federation. French oil refinery workers organized with the CGT union have been on strike throughout October demanding a 10% wage increase, and over 100,000 unionized transport workers, school teachers, and medical staff marched in cities across the country on October 19 heeding a call from unions to protest low pay. Tens of thousands marched in six German cities on the 22nd demanding relief from inflation and energy costs, and there have also been warning strikes by IG Metall, the biggest industrial union in Europe.

Victory At All Costs

There will be more strikes in the coming months, and it is crucial that the best tactics are used. These include organizing around broad demands popular among the working class, initiative from the labor movement acting in coordination with the broader movement, action committees with democratic decision-making, and escalation toward the most powerful mobilizations possible including general strikes. Next steps would include linking up internationally. Rank-and-file union members and ordinary people involved in the movement will need to provide drive from below to continue determined plans of escalation and not allow unnecessary capitulations or demobilization. Down the line, these campaigns could even form the basis for political alternatives that unambiguously fight for the working class, unlike the capitalist parties overseeing this disaster.

The risk of not doing so can be seen in the various instances of European right-wing parties and figures capitalizing on this suffering to make political gains. Alarming signs have been seen with the electoral advances from the far-right Sweden Democrats who for the first time are the second-largest party in the Swedish legislature, the hardline nationalist and Islamophobic SPD in the Czech Republic, and Italian prime minister Giorgia Meloni – who is spearheading Italy’s most right-wing government since World War II.

It is a huge danger that in times of crisis, unless a clear lead is given by the left and the workers movement, right populists are given an opening to position themselves as an outside fighting force against the establishment – and especially as the leading force against war. There have been several past examples of this since 2008, with the U.S., Brazil, Hungary, Poland, and more electing right-wing leaders in the aftermath of the global financial crisis. An increasingly right-wing Republican party in the U.S. can soar into a midterm victory just by highlighting the total inaction of the Democrats. In all cases, there is no prospect of these forces delivering relief to working people, and this misdirection can have massive consequences for all working people as well as the oppressed.

Europe is on the precipice of a period of social and labor upheaval not seen in decades. It is critical that real gains for the working class are won through these efforts, and that the best fighting tactics and methods of organization are exported worldwide to address the life-and-death crisis that is coming for all of us. There is no doubt that there will be explosive class struggle – but the working class worldwide should have a stake in whether they see their way to victory.

We need cross-border coordinated mobilization to win key programmatic demands of these movements. One possibility is for Enough is Enough campaigns to be launched worldwide. Unions will need to fight on these issues while also coordinating with broader organizations.

The cost of living crisis is not a natural disaster brought on by the inevitable and invisible laws of the market, but a brutal attack on the working class by the bosses and their politicians. It is clearer than ever that working people need to fight for a world where our ability to survive is not shackled to market dynamics and the imbecilic decisions of the ruling class who let us starve and freeze before infringing on corporations’ profits.