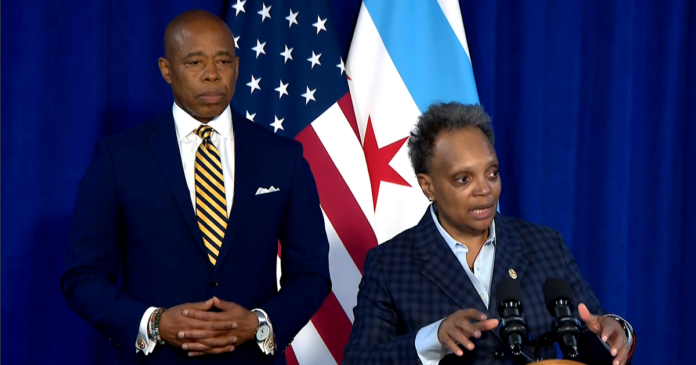 It’s all over the news, from CNN to Fox News: violent crime, particularly homicides, robberies, and aggravated assaults are continuing to rise after the initial uptick at the start of the global pandemic. From The Seattle Times, to the The New York Times, to the Washington Post, the bourgeois press – aided by right-wing pundits and politicians – is quick to lay blame on the 2020 Justice for George Floyd protests, the largest protest movement in the country, for its role in pressuring Democrats to defund the police.

But this is based on a false assumption that the Democrats have defunded the police. The movement against George Floyd’s police murder and against systemic racism did not achieve the main demands of reappropriating bloated police budgets in favor of community programs and resources, or reforming the police force with greater community oversight. Despite being the largest protests in U.S. history, the movement’s lack of clear structures left it vulnerable to Democratic Party co-optation.

Democratic Party politicians adopted the language of the movement, while refusing to fight for the movement’s main demands. This is straight out of the Democratic Party playbook. To do this, they relied on the NGO figureheads who became the unelected leaders of the movement, like the blatantly corrupt Black Lives Matter Global Network. If the movement had democratic structures and organization along with clear demands, it could have waged a stronger united fight against co-optation and for its demands.

In nearly every major city, the Democrats presided over harsh police brutality in response to the mass protests in the summer of 2020. Yet, they presented themselves as the party that will defund and reform the police through vague promises that they only committed to because of the strength of the movement. Come budget season, when it was time to put their words into action – in another dizzying bout of whiplash – they increased police budgets! In small cities like Worcester, MA the City Council Democrats unanimously voted to increase the police budget after the police brutally cracked down on peaceful protestors a day before, and after four hours of public comment from community members opposed to the budget. In NYC, Democrats used smoke and mirror tricks to appear to defund by $1 billion but in reality the budget and functions of the NYPD remained the same.

Since then, the Democratic Party establishment has unabashedly swung further to the right, adopting law and order policing rhetoric. In the two years since the movement, they have repeatedly increased funding for the police and useless, expensive, and ineffective programs like Shotspotter and massive hiring bonuses.

This general rightward shift has boosted the rise of new figures in the ‘Black Misleadership’ class – Mayors Harrell, Lightfoot and Adams – who have weaponized their identity to promote austerity for the poor and handouts for the rich.

Eric Adams, a 22-year police veteran, who campaigned on a pro-police platform, proposed a city budget with zero cuts to the police budget while directing most other city departments to cut their budgets by 3%. He also proposed cuts to 75% of the city’s public schools. In a recent interview about the $10 billion budget shortfall, he stated “Wall Street is hurting, we’re dealing with a real financial crisis in this city. So everyone must do more with less. It doesn’t mean less patrol, less coverage. We are going to utilize our man power and deploy. We fail to deploy our police the way they should have been deployed and that’s what we’re doing.” Poor and working class people are going to pay for the crisis.

In Seattle, where the housing crisis is dire, Mayor Harrelll wants to cut $13 million for homeless services out of an already drastically underfunded program. He also wants to cut inflation adjustment for homeless outreach workers, who are already underpaid and overworked, from 7% to 4%. He has raided $95,000,000 from the Amazon Tax, all money that is specifically earmarked for affordable housing and Green New Deal projects, to plug holes in the budget. He also wants to give $780,000 of city funds to a private men’s only club that he led until taking office this past year.

In a press conference announcing his first round of hiring bonuses for officers, Harrell reaffirmed, “What we’ve consciously tried to do is change the narrative in this city…It’s OK to say we’re funding the police. This is what the people want. This is why I was elected.”

Lori Lightfoot and the Chicago Police Department continue to support and pay the $95,000/year salary to a police officer who is under investigation for links to the Proud Boys. Despite evidence to the contrary, Lightfoot defended the police department’s decision by questioning if the group is “anti-Semitic, anti-gay, far right group”.

Lightfoot and the Democratic majority on the Chicago City Council are sitting on millions of dollars of federal aid that is supposed to go toward social services. Just $2.7 million out of $84.5 million was spent on violence prevention programs, $18.7 million out of $116.5 million for increasing homlessness services and shelter capacity, and the city has not spent any of $16.25 million earmarked for fighting gender-based violence. In total, just one year after the Chicago Recovery Plan passed, the city has spent $130 million out of the $1.277 billion appropriated for affordable housing, mental health, violence prevention, youth job programs and homeless services.

The rise in violent crime is because of the myriad of extraordinary and compounding social crises. The pandemic, social isolation, alienation have compounded the mental health crises especially among young people. Record inflation, skyrocketing rents is pushing more and more working people and families to the street. People are in desperate situations and the only way out to meet their needs is for a massive increase in social services that will require a multi-racial working class movement to win.

More Police is Bad for Working-Class Communities of Color

Working-class people deserve to be safe in their communities, but increased policing has the opposite effect. Broken window and stop and frisk policies have shown that increased policing leads to more arrests and jail time served, disproportionately impacting Black and other working-class communities of color. In New York, where Black people made up 50% of the population in 1999, they accounted for 84% of the city’s stops. More than 80% of the total stop and frisk stops were Black and Latino community members.

The rise of over-policing and increased use of force directly contributes to the unjust murders of Black and brown people, especially young people. In 2014, police killed at least 287 people involved in minor offenses and harmless activities like sleeping in parks, drug possession, having a mental health crisis, or simply looking “suspicious”.

The police are not equipped to deal with the mental health crisis, opioid and drug epidemic, or the housing crisis. Their tool kit only consists of violent suppression of working people and the poor, on behalf of the rich.

Establishment Democrats today sound like the Republicans of the 1990s. The same policies they espouse today were the basis of the dramatic rise in the mass incarceration of people of color then.

It’s no surprise that the only socialist on the Seattle City Council, Socialist Alternative member Kshama Sawant, alone fought to cut the police budget by at least 50% and instead use those funds for social services, fully funded education, and affordable housing. None of the Democrats on the Council, a third of whom consider themselves progressives, nor the NGO leaders, stood with her.

The Role of the Police & the Socialist Approach to Public Safety

The United States far outspends any other country in the world on the military and police. Socialists fight for a dramatic reduction in military and police spending, and reallocating that money to fully fund education, including free higher education, build affordable housing, healthcare for all, rapidly expanding and improving public transit, and create living wage union jobs with Green New Deal projects.

We’re often told that there simply isn’t enough money in the budgets for higher staffing levels in schools and hospitals, to improve public housing, transportation but the money is absolutely there. It’s been defunded by decades of austerity budgets by both political parties, and we need to tax the rich.

Under capitalism, the primary role of policing is not keeping everyone safe. But if the police don’t have to protect us, then who do they serve? The role of the police is to enforce the interests of the capitalists by force. When we strike or protest in social movements, they are there to break strikes, use chemical weapons, arrest peaceful protestors, and sometimes even use deadly force.

As the Democrats double down on the same “law and order” approach to policing that killed George Floyd, Breonna Taylor, Mike Brown and countless others, it’s more important than ever that socialists put forward a clear plan for public safety. This includes cutting bloated police budgets, demilitarizing the police, and disarming beat cops on patrol. Simply cutting police spending will not be enough – we need to fight for community control of the police with full community oversight including the ability to hire, fire, and subpoena officers. Finally, it means fighting for socialist policies to address the roots of crime and antisocial behavior, like jobs, housing, quality schools, and a healthy environment.