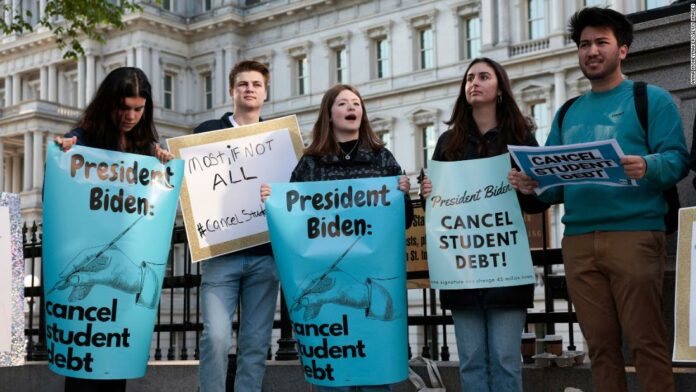 In a reversal of the decision made just this month to cancel up to $10,000 of student debt from all borrowers, the Biden administration has turned around and gutted this decision, saying that private loans will not be eligible for cancellation.

These private loans are among the most parasitic loans students are forced to take on; as the exorbitant cost of college increases year after year, lending corporations like Sallie Mae step in to fill the financial aid gap left open by the federal government, often with impossibly-high interest rates, frequently over 10%.

Until Thursday, the Department of Education’s website claimed that these private loans could be consolidated into one federal plan and therefore fall under Biden’s debt cancellation, but a change to the website now reads, “as of Sept. 29, 2022, borrowers with federal student loans not held by ED cannot obtain one-time debt relief by consolidating those loans into Direct Loans.”

A spokesperson from the administration claimed that this change would only affect “a small percentage of borrowers,” but federal data from as recently as June 30 shows there are more than four million federal borrowers with $108.8 billion of loans held by private lenders. This means that millions of people who spent the last three weeks breathing a sigh of relief that they may have their debt loads lightened have now had the rug ripped right out from under them. While Biden’s original $10k cancellation – $20k for Pell Grant recipients – was still inadequate for many people with student debt, even that has now been undermined.

According to Politico, the Biden administration has made the change to avoid a legal challenge by the companies who hold these privately-owned but federally-backed student loans. However, the fact that these loan companies would challenge any attempt to cancel private debt – their source of profit – was completely predictable from the beginning. At one point, the Democrats may have been planning to fight this battle out in the courts, but now the winds have changed.

This is a naked betrayal of working people, many of whom are saddled with student debt at a time when inflation is hacking the margins off of everyone’s paychecks. As of this year, more than half of students leave college with debt, and the average borrower owes nearly $29,000. Student loans payments are still paused, but as part of the student loan cancellation plan – which is now half the plan it was – the Biden administration promised that payments would resume at the end of this year. When they do, millions of people in the U.S. who were previously treading water may fall seriously behind.

When the Biden administration announced its debt cancellation plan, Republicans screeched that it was “buying votes” ahead of the upcoming midterm elections. But what the evidence suggests is that the Democrats’ overtures to voters – student debt cancellation and the Inflation Reduction Act – have not been as effective in bolstering their chances as the Republicans themselves have been. Data from publicly-available voter files shows an elevated proportion of young people, particularly young women, registering to vote this summer – especially in places where abortion is under threat from the overturn of Roe v. Wade.

“Tim believes using executive action to wipe away six-figure earners’ debt goes too far,” Ryan’s staff told Vox in a statement. “[He] believes the administration would have been better served by prioritizing across-the-board economic relief that benefits all working- and middle-class Ohioans, whether or not they attended college.”

Whether the Democrats always planned to roll the cancellation back, or it’s a last-minute calculation designed to avoid angering the Republican base in swing states, the effect is the same – millions left out in the proverbial cold, again.

It’s not surprising the Biden administration is now defending predatory student loan sharks. However, what is striking is the silence from left Democrats like Bernie, who in 2016 put forward the idea that if faced with opposition on making college free and canceling student debt, he would use his massive public profile to organize mass protests in the streets, coining his unofficial title of the “organizer and chief”.

Rather than mobilizing mass protests of students and graduates to fight for canceling all student and credit card debt, and making public colleges free, neither Bernie nor AOC have commented on this atrocious rollback of the student debt cancellation, prioritizing the ‘party unity’ of the Democrats instead – though it is unity on the basis of screwing over working people. If we’re to win big demands like full cancellation of student debt, our movements need to be independent of the Democratic Party.

Another Can Kicked Down The Road

With ‘landmark’ climate legislation that largely won’t change much, a deflated pandemic response, and now a debt cancellation plan that millions of people have just been cut out of, Biden is once again living up to his unintentional campaign slogan of “nothing will fundamentally change.” It’s possible that Biden’s enduring legacy will be that he managed to punt nearly every social crisis to be someone else’s problem.

Student debt – and debt in general – remains a massive crisis for the average person in America. We need total debt cancellation, not just for student loans but for all kinds of debt that working people are often forced to take on by emergency circumstances. Medical debt continues to be the number one cause of bankruptcy in the United States. We need Medicare for All and free public college – the health insurance industry and private student loan companies should be abolished!

Student loan payments are set to resume in December of this year, which also promises a severe energy crisis caused by the war in Ukraine. At a time where working people in the U.S. are going to be squeezed for every dollar, the debt profiteers are going to come calling again.

Ultimately, it is a profoundly sick system that sentences people to potentially a lifetime of debt for the crime of wanting to learn. Capitalism, a system that runs on profit, will always seek to extract the maximum amount of money from working people – and when goods and services become too expensive for us, the debt hawks will force us to sign a contract to pay them thousands more over time than the original cost. This is completely unsustainable, and to win a system where we aren’t fighting to stay afloat, we need an entirely new system – we need a socialist world.