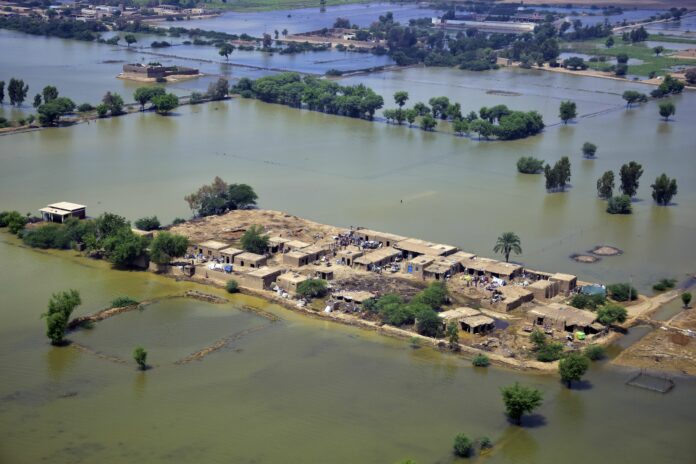 Extreme heat followed by historic rains have flooded Pakistan, washing away crops and livestock. U.N. satellites show that over 21,000 square miles of Pakistan’s crop fields have been submerged, threatening to raise food prices in a country already facing 45% inflation. China is experiencing the most severe heatwave ever recorded, resulting in crop failure, livestock deaths, and weeks-long blackouts at major factories. Drought has led to rivers so dry that they’re unable to transport goods or generate hydroelectric power, including in places like the Sichuan province, where 80% of power is hydroelectric. Rice planting areas in India have shrunk by 13%, while torrential rains have flooded in Bangalore — the Silicon Valley of India — due to poor urban planning.

In the last few months, climate catastrophe has come for the first, second-, and fifth-most populous nations in the world, with potentially dire economic consequences. We can expect food prices to rise in response to the massive death of crops due to drought and flood in China, India, and Pakistan, compounding the spike in food costs created by the Ukraine war. In both countries, the wheat crop — typically planted between September and December — has been delayed. For Pakistan, the delay puts the entire crop in danger.

Capitalism is explicitly at the center of these climate disasters. A recent international study on Pakistan concluded that rising temperatures made rainfall 50% more intense this year. However, the study also concluded that the flooding was exacerbated by poor planning, inadequate investment in infrastructure and river management, and high poverty levels — all consequences of capitalism.

The flooding in Bangalore was similarly caused by rapid capitalist development. Though India’s Silicon Valley experienced the highest rain volume in nearly a century, it was 20 years of chaotic development that sacrificed the city’s drainage infrastructure for greater profits. Structures ate into bodies of water intended to help with flood prevention; the region’s greenery was traded for concrete and asphalt, reducing the city’s ability to withstand high levels of rain even more. It was Bangalore’s development into a technology hub that made it both enormously profitable and a climate disaster.

All of this underlines the need for price controls for food and energy, massive investment in infrastructure, and a rapid transformation of the economy away from fossil fuels. It’s a testament to the horrifying logic of capitalism that the world’s second-largest economy is doubling down on fossil fuels this year. China has approved double the number of coal-fired power plants in Q1 2022 as the same period last year. Turning to coal will temporarily boost growth figures while rendering China less dependent on hydroelectric power. Another major factor is the imperialist conflict with the US, which even more than short-term profits is pushing the Chinese regime to fall back on coal power, including increased coal imports from Russia, in the name of ‘national security’.

The emissions produced by new and soon-to-be finished coal-fired plants in China could equal the total annual emissions of Spain. These emissions will further accelerate the impact of climate change worldwide, and Chinese workers will pay the same price for it as everyone else. For instance, China intends to address the dwindling supply of drinkable water with the South-North Water Transfer Project. However, the dams required for this project will displace 330,000 people who live in the area. That’s the first drop in the bucket of the roughly 57 million people in China who will be displaced by rising sea levels in the next several decades.

“Climate Adaptation” Investment Shoots Itself In The Foot

Facing existential threats like drying rivers and flooding cities, capitalists are turning to investment in climate adaptation projects. However, the insistence that these investments turn a profit sabotages the long-term impact of these projects. In China, “sponge cities” — designed to “soak up” and release excess water — are 85% funded by private developers and banks, who then cut costs to drive up profits, resulting in insufficient infrastructure. During the Henan floods last year, automatic flood control and pump systems failed and led to the flooding of a traffic tunnel in Zhengzhou. Six people drowned in the tunnel.

In Pakistan, prospects for rebuilding are dire. It will take an estimated $10 billion in additional funds to recover from the floods, but the nation is already dependent on foreign credit. The $4 billion loan from the IMF is to prevent a Sri Lanka-style collapse and limit further influence from China, who is Pakistan’s biggest investor through the Belt and Road Initiative.

Neither the West nor Beijing see this as ‘aid’; China has invested tens of billions into Pakistani export infrastructure and profited from cheap labor and materials to exploit more foreign markets. The IMF, meanwhile, has required Pakistan to raise fuel prices and cut government spending, which means cuts to social services. Cuts like these will further drain funds away from vital infrastructure projects and create higher levels of poverty, both of which were the part of the reason Pakistan flooded in the first place!

Investment Flowing In The Wrong Places

Is the logic of capitalism capable of solving the double-edged crisis of climate and oncoming recession? Even the editorial board of the pro-capitalist Financial Times admits that the obstacle to climate adaptation in Pakistan is the enormous debt trap created by the IMF, China, and other investors. But their solutions, which include “better evacuation plans” instead of phasing out fossil fuels, are totally insufficient.

Meanwhile, with a recession on the way and the world dividing into two capitalist blocs, imperialist nations are hungry for somewhere to invest. India has put itself forward as the replacement for China as a home for foreign capital; in August, India received 70% of all foreign investment in Asia. Is it because India is more vulnerable to rising sea levels than most of the world? No — as the Wall Street Journal reported, “With slim pickings around the world for investors to bet their money on right now, India might seem like an opportunity.”

But the experience of Bangalore shows where this investment will go — and the consequences working people will pay for it.

The economic response to the climate crises in China, India, and Pakistan is disastrous. Even with thousands dying and millions displaced or at risk, capitalism’s goal remains the same: exploit resources and hoard the returns. The two competing imperialist blocs won’t ‘innovate’ new ways of addressing the climate; they’ll invest in wasteful projects that won’t work, reap the profits, and invest them back into the very industries harming the planet, increasingly bending their energy and climate policies to support rival military agendas.

They’re right about one thing: we need to adapt rapidly to the effects of climate change today while transforming the economy to prevent further damage. But to do that, we need to move beyond the limits of capitalism toward a planned and rational economy.

What is needed is full employment for building physical infrastructure to protect at-risk nations from future floods, fires, and disasters; a total shift toward green energy; living wages; and price controls to ensure everyone can afford what they need to live.