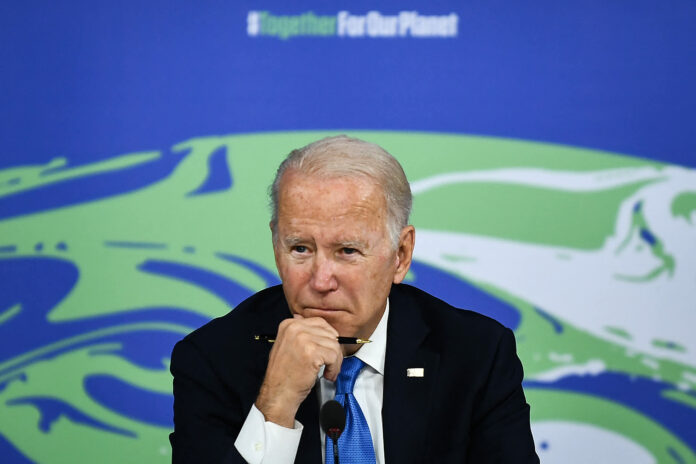 The Inflation Reduction Act (IRA) is being touted as the largest climate bill in U.S. history – but what does that actually mean, when the bar was so low to begin with?

President Biden’s original climate legislation for the IRA crumbled in mid-July, when West Virginia Senator Joe Manchin rejected parts of the bill amid negotiations. There was immediate backlash to the deal’s breakdown; even The New York Times published a scathing hit piece on Manchin and his ties to the fossil fuel industry.

Manchin has spent the last 30 years making millions off of coal, and has used his political office for little else other than to protect his family’s coal company. So this same senator co-wrote “the most significant U.S. climate legislation to date?” What’s the catch?

A Lifeline for Fossil Fuels

The new energy, health care, and tax bill proposed $369 billion in spending, with much of that going toward subsidies for green energy initiatives and electric vehicle production, with the goal of making green energy cheaper for consumers to choose and for businesses to switch to.

After years of scientists, environmental activists, and young people pleading for substantial action to combat climate change, we get a small morsel of progress – a notable example of this being the provision that will allow Medicare to directly negotiate drug prices. But with the Democrats and Republicans, it’s one baby step forward, five giant steps back: the act is littered with provisions that throw a lifeline to the fossil fuel industry.

Their effects will endure for at least the next decade: new drilling leases on lands in the Gulf of Mexico and Alaska. Speeding up permitting for energy projects, fossil fuel projects included. Fee and penalty exemptions for oil and gas companies that “behave” by doing the absolute bare minimum, like cleaning up their own leaks. And finally, obligatory support from the Biden administration on a new natural gas pipeline – a pipeline that Manchin and his fossil fuel friends would profit from.

This provision may have been a no-brainer for Biden, seeing as he signed off on 34% more drilling permits than Trump in his first year. So while the bill will result in a net loss of carbon emissions, which is very positive, it comes at the cost of enshrining more projects for the fossil fuel industry.

Why is that such a big deal? It comes at a time where fossil fuel executives are genuinely weighing whether new investments are worth the money. Chevron’s CEO, Mike Wirth, said this year that he predicted that no new oil refineries would ever be built in the United States.

“You’re looking at committing capital ten years out, that will need decades to offer a return for shareholders,” Wirth said.

This climate bill extends a lifeline to fossil fuel companies that have no place in a sustainable future.

Incentives for Those That Can Afford Them

Even with funding for green energy and a 15% corporate minimum tax, which would affect about 150 of the world’s largest corporations, the climate bill is simply a “green capitalism” bill: it provides opportunities for corporations to do the right thing – but only if they want to.

Sure, going green can eventually be profitable for companies that aren’t predicated on pollution, but a full transition would take the time and money that big business would often rather just keep to itself.

The bill expands green energy, and would potentially minimize air pollution in poor communities, but those communities are facing more threats than low air quality. What happens when every season is wildfire season? How are regular people supposed to retrofit their cars and homes when they’re paid less than a living wage? A tax credit isn’t a selling point if working-class families are living paycheck to paycheck.

The tax breaks and incentives for individuals are aimed at those that can afford a Tesla or a solar panel system, which still costs thousands after those federal tax incentives. In the 755-page piece of legislation, is there any mention of what the 600,000 people who are homeless in the U.S. are supposed to do? What should they do on a 110-degree day, or a below-freezing night? While public transportation agencies can get clean energy tax credits, is there anything in there about building free public transit? Improving existing public transit systems? Getting anything at all for riding a train or bus? (Answer: no.)

The bill also pushes forward the growing trend of deglobalization – the bill provides incentives for more EV batteries and parts to be made in America, attempting to undercut Chinese production of these components. This is another move on the chess board between these two global powers fighting for economic dominance, but it doesn’t serve to fight the climate crisis. Planetary warming is a problem that cries out for international planning and cooperation, instead, the needle of capitalism’s compass points eternally towards needless competition.

The bill passed in the Senate by the skin of its teeth, with a 51-50 vote. Because it was introduced as a budget reconciliation bill, it was able to pass with a simple majority – versus the bill needing two-thirds majority and facing a potential filibuster. All Republicans voted against it. It was then passed in the House in a 220-207 party-line vote, with all Democrats voting in favor and all Republicans voting against, sending it to Biden’s desk for final approval.

While this is a win for green energy expansion, it’s hardly a win in the climate crisis fight. The political establishment does not want to take the measures that are needed in avoiding massive climate casualties. It can’t even pass a single climate bill without making major concessions to fossil fuel interests. These tradeoffs severely stunt our headway overall.

Is it good climate legislation if it fails to meet the needs of poor and working class people?  In news articles covering the bill, the same words keep coming up: breaks, credits, incentives, loopholes, exemptions, exceptions – things that aid in dodging system change, upholding the status quo, and keeping business as usual. None of those things will pull us out of this crisis.

When it comes to tackling climate change, capitalism is a system that will never be able to rise to the occasion. Carbon emissions, waste, and destruction on a massive scale is something only capitalism could produce, and what got us to this point in the first place.

Proponents of capitalism count on the idea that if the markets are driven by the opportunity for profit, they’ll align with and be able to fill the needs of regular people. But this isn’t the case. Capitalism is disordered, it drags its feet. Data says public transportation is a low-emissions solution, but capitalist parties introduce climate bills that are almost entirely focused on cars. Thousands die in a summer heat wave in Europe, but as long as there’s oil to be sold, Exxon and BP will put their profits over the planet every time.

We cannot sit and watch the political establishment inch along when leaps and bounds are what’s needed. To take down capitalism, we need socialism. Socialism is a system that works on the planned economy, which allocates resources according to need, not profit. And it is needed now more than ever.

We cannot wait for green capitalism to save us, because it won’t. This crisis calls for a socialist movement to demand actions like bringing the fossil fuel industry into public ownership, reassembling it for green energy, implementing a Green New Deal with jobs programs paid for by taxing the rich, retraining workers in polluting industries to transition into the renewables industry and with well-paid union jobs, creating infrastructure projects that keep our communities safe during climate emergencies and natural disasters, building more public housing, and passing Medicare for All. This is bigger than solar panels and electric cars. It’s going to take working people on an international scale to successfully dismantle capitalism. Our planet depends on it.