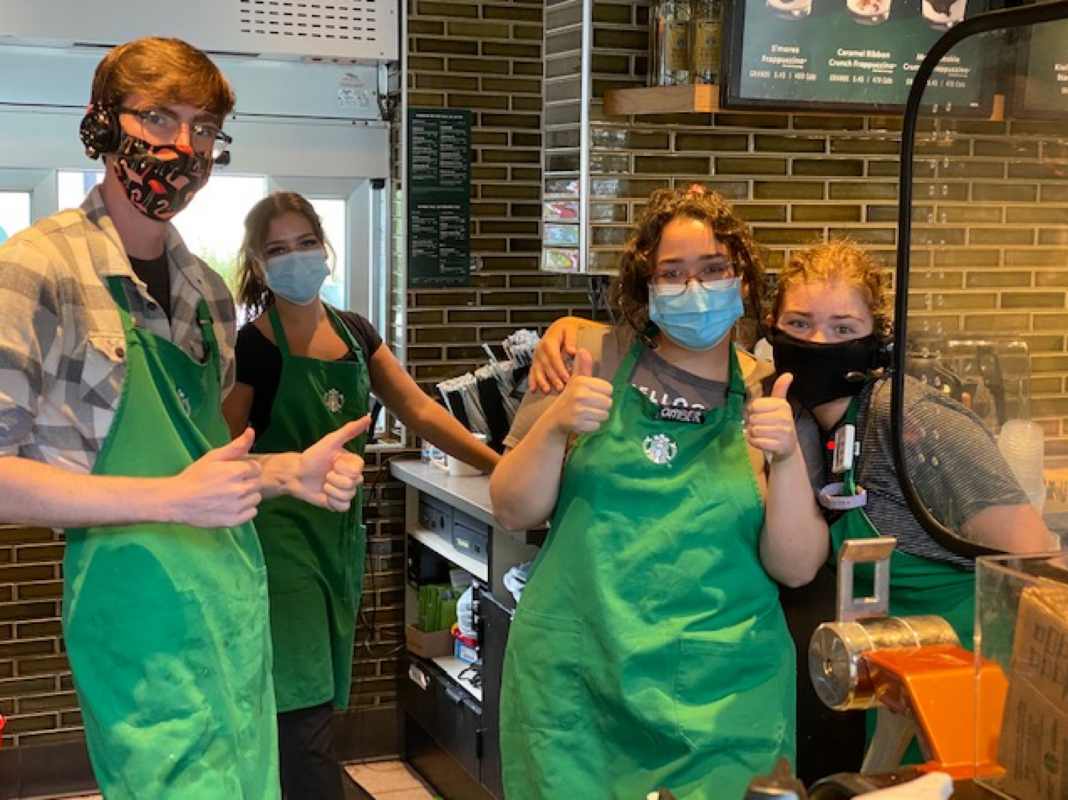 As the campaign to unionize Starbucks heats up with over 200 stores seeking representation by Starbucks Workers United, the movement needs to draw lessons from previous battles to organize the coffee Goliath. In previous articles Socialist Alternative has pointed to CEO Howard Schultz’s union busting history and the need for a fighting, class-struggle approach as organizers prepare for first-contract battles.

The vast majority of Starbucks stores are corporate-owned. (Starbucks counters in airports, malls and grocery stores, many of which are unionized, are franchises not Starbucks-owned). There is one corporate-owned store in North America that has actually won a union contract. It’s on Douglas Street in Victoria, British Columbia. Recently, Starbucks Corporation has rolled out its propaganda machine to twist this story into a reason for its employees NOT to join a union. This is our response to that disinformation campaign. We hope it can be used everywhere that coffee workers are trying to unionize.

For an example of the lies that Starbucks managers are telling, we asked Boston Socialist Alternative member and Starbucks barista Ty Nolan to share what he was told in a captive audience meeting.

Ty Nolan: “They told me that the store in B.C. was the only unionized Starbucks store in the world [sic] and therefore was the only example to draw on, to learn what SBWU can do for workers. They told me that those unionized workers make about $1 Canadian less than non-union Starbucks workers in British Columbia and that on top of being paid less and having less benefits, they also have to pay union dues. They said that once we unionized, our pay and benefits would freeze until a contract was agreed upon, and that when Starbucks decides to give workers a raise, we wouldn’t receive it. They essentially described working at the union store as hell – you get paid less and you have to pay union dues, partners can’t pick up shifts at the non-unionized stores so there’s staffing issues, there’s constant turnover because of course workers want to work at a non-union store and get paid more.”

The truth is this: on June 21st 2021, after a year-long fight, workers at the store in B.C. unanimously approved an agreement that they had negotiated with Starbucks Canada through their membership in the United Steelworkers’ union. This contract provided substantial raises above minimum wage – which is what most of the workers were making at the time – along with solid protections on issues like discipline, job security, and very importantly, health and safety measures including protections against bullying and abusive customers.

As Canadian media reported at the time:

“In the past, workers at the outlet would often face harassment from certain customers “for weeks and weeks and weeks” without receiving sufficient support from management, said Izzy Adachi, a barista and UWS Bargaining Committee Member.

“And over the past year, the Coronavirus Pandemic has only exacerbated this type of public abuse, especially over the mask-wearing mandate. Now, staff will be able to file grievances against management. Izzy Adachi called this accountability measure the “biggest win” from the collective agreement: “I think that within the service industry, there is this idea that we’re supposed to let people take advantage of us or treat us poorly just because it’s ‘unskilled labor.’ I don’t see that as fair.”

Starbucks Canada went to enormous lengths to prevent this one-store contract from being the spark that lit a prairie fire of organizing. On the next day after that contract was signed, Starbucks Canada announced raises for all 19,000 baristas that did NOT work at that store. These were actually measly raises considering how long these essential workers had waited for them – in fact the company, in raising wages for its hourly workers by around 5% made the shamefaced boast that this was “the most significant investment in retail hourly pay in Starbucks Canada’s history” along with the embarrassing admission that it had only now “committed to paying partners above minimum wage across the country.  Since the Steelworker contract already raised the pay for new hires 55 cents above the provincial minimum wage this did not, in fact, bring those other workers’ pay above those of the unionized workers. Four months later, having evidently concluded that they needed to do more to stem the tide, SBX Canada announced another round of increases – after insisting in its media releases that this had nothing to do with the union.

We asked members of our sister organization, Socialist Alternative Canada, to talk to the workers in Victoria, BC to get their side of the story. One of the things we found out was that the Starbucks managers’ claim that the unionized workers have “less benefits” is just a flat out lie. The benefits package remains the same.

Chris Fofonoff of SA Canada talked to United Steelworkers’ Unit Chair Sarah Broad, who works at the Douglas Street store and served on the bargaining team.

What Sarah and her co-workers won was historic. Many valuable rights are written into this contract, which has extensive and detailed language against harassment and bullying, and protecting workers’ rights – including the basic question of job security, with language that bans arbitrary discipline or dismissal and protects the rights of workers to be represented by trained union stewards while on company time. It also protects workers’ incomes by spelling out the minimum length of a shift (3 hours) and mandating that anyone called in for a shift has to be paid a minimum of 2 hours pay even if they turn out not to be needed.

The pay scale laid down in this contract represented a raise for all these workers at the time the contract was signed, on June 22nd 2021. The contract runs for three years from that date.

There was also a $175 signing bonus for everyone in the bargaining unit as of the date of ratification. Unfortunately, the union did not get anything in this agreement that protects against inflation (AKA a COLA or Cost Of Living Allowance – strong union contracts mandate that future increases can’t fall below the rate of inflation, using measures like the Consumer Price Index or CPI).

But the problem that Starbucks managers are crowing about isn’t about that, because they don’t want to talk about that. The problem is that it only covers that one store.

Unquestionably the United Steelworkers made a strategic mistake in signing a contract that did not include a “Me Too” clause – in other words, a binding agreement that if any other worker in the country gets an additional raise or other benefit, everyone covered by the union contract will get it too.

Failing to include this language allowed the company, Starbucks of Canada, to then unilaterally raise the pay of all its other baristas and shift supervisors – while using the contract as an excuse not to give the same raises to the union-covered employees. Which is exactly what it did, announcing these raises on June 23rd 2021 – the very next day after the contract was signed – and backdating them to May 31st so that all the as yet unorganized employees would see the raises in their next paycheck.

In the above-linked media release, the company bragged that this was “the most significant investment in retail hourly pay in Starbucks Canada’s history.” They neglected to mention that it only happened because one store had just signed a union contract, and Starbucks’ billionaire executives were desperate to stop it from inspiring workers in other stores.

Four months later, on October 27, 2021 the company doubled down on this tactic, announcing a round of even more dramatic increases for its workers in Canada, to take effect on January 1, 2022.

In language taken straight out of an anti-union playbook, Starbucks announced: “a wave of investments for its partners (employees), building on its 50-year history and tradition of listening and learning… Starbucks Canada senior vice president and general manager, Lori Digulla, emphasized the company’s ongoing commitment to prioritize partner care and well-being. ‘Today, I am very proud and excited to announce record investments in our partners,’ said Digulla.  These investments included the following:

As of June 1, 2021, the provincial minimum wage in British Columbia was $15.20 an hour – 55 cents less than the $15.75 starting pay negotiated by the Steelworkers’ union. With this announcement, Starbucks was presumably paying every other barista in B.C. a starting wage of $16.20 an hour. This is how badly Starbucks Corporation wants to stop its employees from having a union. Starbucks executives are absolutely fine with paying their 19,000 Canadian barista 45 cents an hour more than a year-long union campaign had succeeded in winning, if it meant that they could stop the union organizing drive from potentially going on to win even higher wages and other gains that would eat into their profits. And this was a drop in the bucket compared to how much Starbucks has spent in stock buybacks, or handed its failed CEO Kevin Johnson as a golden parachute.

It’s really important for workers organizing in the coffee industry, but especially at Starbucks, to take note of these developments and draw the right conclusions from them.