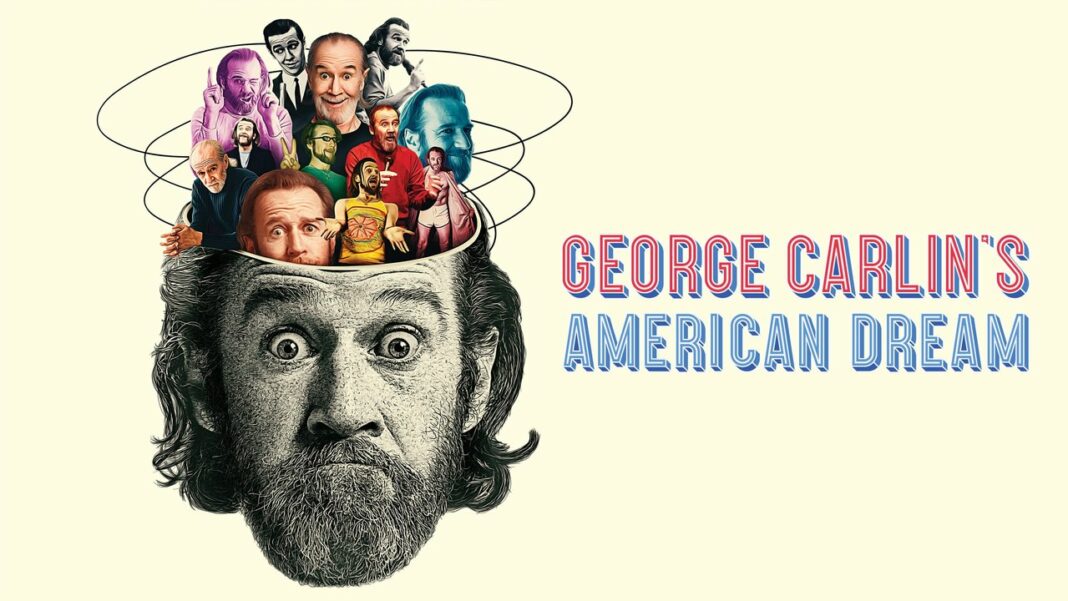 In the wake of the Supreme Court leak on Roe, clips of comedian George Carlin from thirty years ago suddenly went viral. “They say they love the unborn, but once you’re born – you’re on your own!” Adding, “If you’re pre-born, you’re fine. If you’re pre-school, you’re fucked.”

The new, almost four-hour HBO documentary on Carlin’s life will be an eye opener to many young people. Carlin had no fear of standing out from other comedians of his era, of tearing into corporate commercialism. His content was always anti-establishment even if his form was often cynical and sometimes unpleasant and discomforting.

Along with Richard Pryor, George Carlin was one of a few top comedians highly politicized by the civil rights movement, Vietnam war, and counterculture. Both started the 60s doing stand up in suits and ties, writing for bland TV variety shows, sometimes together, and ended that decade by being among America’s most angry critics.

While few if any major white comics took on racism and police brutality, Carlin who himself was arrested several times, was transparent on the cops. “There should be two requirements for police officers: intelligence and decency. You never can tell, it might work. It hasn’t been tried yet.”

Born into a poor working class Irish family in Harlem, New York, Carlin’s mother held him as an infant in her arms while his father battered down their apartment door threatening to kill them all. They fled down the fire escape with his older brother in tow. His brother Patrick is interviewed in the documentary, a working class New Yorker for whom every third word is a swear word.

From 1961 George and his wife Brenda lived out of a car touring the country doing small club standups. Eventually he was discovered and got on TV. With only 3 channels, every show would get tens of millions of viewers and TV represented immediate economic stability for a comedian or entertainer. However, their newfound affluent lifestyle, changed his relationship with his wife who went from being George’s manager to being his housewife, which almost wrecked their loving relationship.

Carlin’s comedy from the beginning was observational. He poked fun at the small, unnoticed details of how humans interact with each other. He would warm up the crowd with these jokes and then begin to be increasingly political as the show went on.  As Carlin got older, the observational jokes still featured in his comedy but his politics became increasingly primary.

As civil conflict erupted in 1960s America, Carlin was less and less able to contain his anti-establishment anger from flooding into his comedy. He walked away from a $250,000 a year gig, took off his suit, grew a beard, and began telling the truth about the world. That next year he made $12,000 as he switched to opening at coffee houses and college campuses. He spoke to a generation of young people whom comedians were generally not connecting with.

He cleverly interpreted the great civil rights leader and boxer Mohmmed Ali’s dilemma: explaining that Ali beats people up for a career but when the government tried to force him to go to Vietnam to kill villagers, he drew the line. Then the U.S. said to him, “well if you won’t kill people for us, then we won’t let you beat people up!” A reference to the boxing ban on Ali for refusing to be drafted.

Despite his lack of formal education, Carlin was a brilliant and sophisticated word smith. He loved language. His uncle, also not formally educated, hand copied out the plays of Shakespeare for the pure pleasure of it. His mother, he cited as a central influence, as a great story teller.

As corporations increasingly used language against workers and consumers, George Carlin was there calling it out. He explained that when two planes nearly collide, the airline industry has succeeded in having it characterized as a ‘near-miss’ when in reality it is an actual miss and should be called a ‘near-crash’. However the industry’s main priority was profit and not being honest about safety language.

While profanity is widely used in cinema and online today, in the 1960s it was entirely different. Working class people, mostly men, used profane language, especially at work, but it was banned in almost all media. The stand up comedian, Lenny Bruce, before his death in 1966, had been arrested multiple times for violating public obscenity laws. In New York one night, a young George Carlin was also arrested and shared the ride to the police station with Bruce.

In the early 1970s Carlin began his own campaign against the hypocrisy that surrounded profanity. His set included the “Seven Words You Can’t Say on TV.” In 1972 he was arrested on stage by Milwaukee police and held overnight. In the morning he was brought up in front of the judge and the prosecutor was unable to convince the court that Carlin, by using profanity, had caused public disorder. The main evidence against the state was that he received rapturous applause for his use of profanity.

The court case only fuelled Carlin’s schtick around swearing. He then began to refer to the 7 words as the “Milwaukee Seven.” This was a playful reference to the Chicago Seven, previously on trial for anti-war activity. Carlin was not a politician, but he was more than a jester. His battle against the right wing’s ban on profanity was a small part of a wider struggle against the establishment’s cultural oppression.

During the Reagan and Bush eras, Carlin’s work became increasingly sharply political. He was not a socialist, but if a genuine mass, working class, socialist movement had developed, he would’ve gravitated that way. As was common in those decades he incorrectly referred to the working class as the middle class, arguing that there were three classes. The rich who pay no taxes, the middle class who do all the work and pay all the taxes and the poor, who are there to scare the shit out of the middle class to prevent them making waves.

He spelled out capitalism’s policy of divide and rule, explaining how the rich, the politicians and the media are constantly trying to divide us by race, religion, ethnicity or sexuality. This at a time when no other top comedians even came close to using this kind of analysis in their work. Carlin went further to explain that as long as the “middle class” and the poor were fighting each other, the rich could run away with all the money to the bank. Carlin was the person who created the saying that is often paraphrased, “It’s a big party and you are not invited!”

His popularity with working class people was immense. He spoke about war and drugs in class terms. He captured the hatred towards the elites when few others were as explicit. In a way, he represented and spoke for the most politicized layer of working class people in his time, capturing their feelings when they could find few other mediums that did so.

Unfortunately, he also sank into the depths of that layers’ deep disappointment in the 1990s and 2000s. As is documented in the two-part series, he was still very angry to the end, but his cynical twist had turned into open pessimism about the chances of changing the world.

Street fighters often swing wide and can hit the wrong target. Carlin was a street fighter, but a very sophisticated one. His humor was way ahead of its time, getting the kind of echo that Bernie Sanders got in his early days in Burlington. If Carlin had lived to see Occupy in 2011 and the popularity of the idea of the 99%, his cynicism could have unraveled. We will never know.

All humor, like all art, can be used ideologically; either by the ruling class or by those opposing it. It can be used to put down and divide people or to confuse people. But it can also be used to raise up and unite people and give insights into the real world we live in. The HBO documentary is correctly titled as “George Carlin’s American Dream.” As he would say, “‘They call it the American Dream, because you have to be asleep to believe it!”