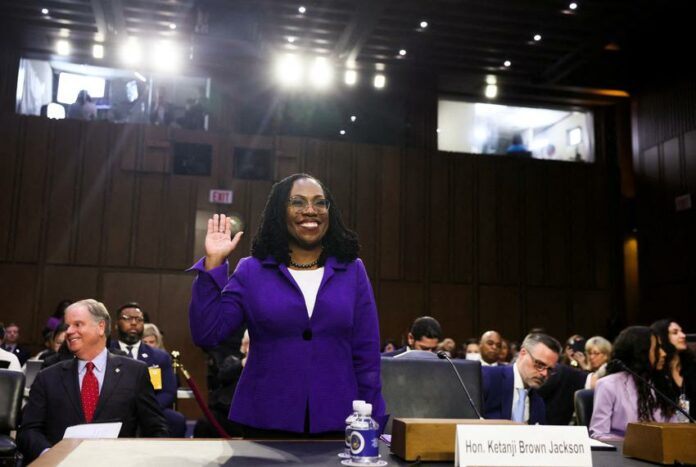 In April, the U.S. Supreme Court welcomed Ketanji Brown Jackson, its first Black woman justice in U.S. history. She was confirmed by a 53-47 vote, with three Republican and all Democratic senators in favor. At the confirmation hearings, GOP politicians pelted her with questions so ridiculous and irrelevant it became hard to discern Brown’s actual positions – everything from “do you think babies can be racist?” to “can you provide a definition for the word ‘woman?’”

Republican shenanigans, while both horrific and entertaining to some extent, left many wondering about Jackson’s politics. Her record as a judge is of major consequence to ordinary people. It is key that we take stock of Brown’s politics and what her confirmation actually represents.

The Oppressive Role of the Supreme Court

The political character of the current Supreme Court is a tremendous source of anxiety for anyone on the side of reproductive freedom, voting rights, and LGBTQ rights in particular. The conservative majority appears primed to roll back decades of progress and it is already getting to work with the gutting of Roe v Wade.

The Supreme Court acts as a check on working people’s ability to influence politics. Their monarch-like status, appointed by other members of the ruling class to serve lifelong terms, helps protect against what James Madison called the “tyranny of the majority.” Ketanji Brown is now a member of an institution that is anti-democratic and anti-worker at its core, and her rulings and opinions, no matter how progressive, cannot fundamentally change that fact.

Brown’s confirmation has been heralded by corporate media as a major victory for Biden’s domestic agenda and for women and people of color more broadly. Indeed, this is the most diverse Supreme Court in U.S. history, with three people of color and four women. Cory Booker commented: “It’s a sign that we as a country are continuing to rise to our collective, cherished, [and] highest ideals.” Major press outlets published article after article gushing over Brown’s stellar credentials and Harvard degree.

But what does the breaking of this glass ceiling mean for ordinary people, concretely? If representation on the court is such a victory, why are women and people of color still bracing to lose their few, hard-won rights?

Justice Brown will still have to contend with six conservative justices, and like Justice Ruth Bader Ginsburg, the most she can do is express her own personal dissent as rights are chipped away. Her opinions are unlikely to sway her right-wing colleagues, who have already shown her nothing but disrespect.

And it is not a given that she will dissent against the majority. During her confirmation hearings, Brown identified with a right-wing approach to Supreme Court rulings known as “originalism.” Originalists interpret constitutional rights exactly as they were written in 1776, rather than resituating them in the current political and legal context. She commented: “I believe that the Constitution is fixed in its meaning. I believe that it’s appropriate to look at the original intent, original public meaning, of the words when one is trying to assess because, again, that’s a limitation on my authority to import my own policy.” Brown would be joining Justices Samuel Alito, Clarence Thomas, and Amy Coney Barrett in this perspective.

She also has the endorsement of the The International Association of Chiefs of Police, and it’s easy to see why. She is an outspoken supporter of law enforcement and comes from a family of police officers, including her brother and two of her uncles. Her uncle Calvin Ross (a former Miami Police Chief) commented: “I don’t feel she’s at all soft on crime.” Moreover, Brown is remarkably soft on police violence and abuse. Throughout her career, she has doled out qualified immunity like Halloween candy. In cases Smith v United States and in Page v Manusco, Brown ruled in favor of police officers accused of making unlawful arrests. In James v United States and Kyle v Bedlion, she ruled in favor of police officers accused of excessive force. In cases United States v Wiggins and United States v Lee, she ruled against increased COVID-19 precautions in the jails. The list goes on and on.

Biden’s popularity has taken a dramatic nosedive since his election. His effort to give a Black female face to his administration is unlikely to shore up public support. The Democrat-majority government has yet to pass the PRO-Act, the Equality Act, the Build Back Better Bill, a $15 minimum wage, or universal healthcare. They fail to codify Roe v Wade into law and wring their hands as the Republicans viciously attack trans youth. In the face of Biden’s refusal to materially improve the lives of the working class, symbolic gestures fall flat.

Next Steps in the Fightback

Although it lacks any formal democratic structures, the Supreme Court can bend to pressure from the masses. This was evident in the historic Roe v Wade ruling, which was issued by an overwhelmingly conservative Supreme Court under President Richard Nixon. A similar mass movement of coordinated walkouts, strikes, and protests could win back not only Roe v Wade but potentially even stronger legislation. The thousands of people in the streets protesting the leaked ruling are pointing the way forward. As rights are put on the chopping block, there is no need for us to accept the Supreme Court’s attacks lying down. Unions, students, and grassroots organizations should adopt combative tactics and be prepared to escalate action to beat back ugly right wing rulings. Beyond that, to have a truly democratic world where our rights are comprehensive and secure, we need a socialist society.