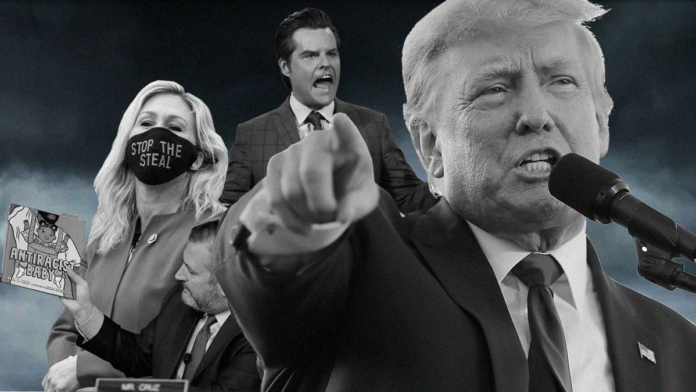 In the run-up to the midterms, Democrats are facing the music as the country prepares for a Republican sweep, putting the final nail in the coffin of a short-lived blue trifecta.

In some ways, it’s as if it already happened. Biden’s first year in office was a historic year of attacks from the right. Families of trans children in Texas are under state investigation for charges of “child abuse,” and a woman accused of self-induced abortion was jailed for second-degree murder. Even before this week’s leak which exposed the Supreme Court’s brazen intent to overturn Roe v. Wade and sent shockwaves across the country, the landmark decision was already effectively null for one in ten U.S. women of reproductive age. In Florida, it’s legal to run a car into a crowd of protesters and illegal to discuss gender identity and sexual orientation in schools. Nineteen states have passed stringent new voting restrictions. The reliability of the courts to block these cruel measures has only declined, and the Democrats have done virtually nothing.

Now would be the time for the Democrats to meet the right-wing threat head-on and put up a real fight. Instead, they’re sulking and waiting to wash their hands of the stressful burden of governing.

Obama ran on an empty promise of “hope and change” only to re-enter wars he pledged to end, start new ones, and bail out Wall Street while ordinary Americans barely recovered from the 2008 recession. This produced an earlier iteration of Trumpism in the form of the Tea Party. Then, resulting frustration, anger, and disillusionment delivered Trump on the back of anti-establishment sentiment and anger at the status quo.

Millions of working people who opposed Trump’s brutality were drawn toward Bernie Sanders’ 2020 campaign for president. The dynamic around his candidacy was electric, with over a million people signing up to volunteer. After the Democrats came together to crush Bernie’s momentum, his millions of supporters were told by both the establishment and Bernie himself that their only option to defeat Trump was to line up behind Joe Biden.

Biden started his presidency with a honeymoon, spurred by mass vaccinations and wins like the American Rescue Plan and the infrastructure bill. With all the crises that have hit in the meantime from COVID variants to record inflation, the honeymoon feels like a lifetime ago, and it’s not hard to see where things go from here.

Republican captures start with the Democrats’ failures, who in turn gain some ground back on backlash to Republicans. We rarely manage to make any real steps forward to benefit ordinary people – and so goes the strange loop of “lesser-evilism.”

But this isn’t quite like last time; today’s right wing is a far cry from either the neoconservative movement of the Bush era or the Tea Party. We predicted that Trumpism could persist and even grow under a Biden presidency that failed to address the crises facing U.S. capitalism. Now the extent of this growth and the danger it continues to pose is being revealed.

Trump himself is intervening aggressively in the midterm elections and has endorsed nearly 130 candidates for 2022. While Trump’s initial victory was not itself a direct indication of Americans moving to the right, his movement has attracted and energized a base of Christian nationalists, anti-vaxxers, Qanon believers, and “stop the steal” crusaders who are ready to go to war for their agenda. New far-right darlings like Marjorie Taylor Greene, Josh Hawley, and Matt Gaetz have taken the reins as Republicans’ biggest influencers and fundraisers. The Anti-Defamation League categorized over 100 candidates running for office this year as far-right extremists, with more candidates than ever having open associations to the organized far-right via the Proud Boys and the Oath Keepers.

The likes of Liz Cheney and Mitt Romney enjoy new status as personas non grata in this new landscape. Republicans who condemned the January 6th coup attempt have been all but shunned from the public eye, with 10 House Republicans who voted for impeachment now retiring. They’ve read the writing on the wall: cocktail party country-club Republicanism is out; noisy, supercharged, and outraged Republican “activism” is in.

These are the forces poised to gain major ground across the country come November. Big business will throw money at whoever they think will win and return the favor – and sure enough, a year after January 6th scared many corporations into backing off PAC donations to the biggest liabilities to their public image, corporate cash is making its way back into “Stop the Steal” Republicans’ pockets. It’s always been a one-party system for corporate America. They will wear whatever PR mask will benefit their profits.

What Will the Democrats Campaign On?

Well, they definitely can’t use “Build Back Better” anymore since the spending package jam-packed with enormously popular relief measures went belly-up thanks to their own party infighting. Sensing this, the establishment may test their luck with straight-up gaslighting.

In a White House meeting of the party leadership to hammer out a midterm strategy, Nancy Pelosi threw up the slogan “Democrats Deliver.” They continue to insist the economy is great because employment is up, while people are bleeding out cash to pay for food and gas. The New York Times claims Biden’s track record is full of victories that are simply too “modest,” “technocratically elegant,” and “submerged” for ordinary people to understand. All of this is doomed to fall flat with ordinary people.

For working people, the choice is between Republicans versus their primary enablers. What does the Democratic Party even stand for? They’re the party of “We want good things, if only it weren’t for that darn [Manchin/Sinema/filibuster/Senate parliamentarian/Putin]!”

Democratic leaders’ own rhetoric has shifted to the right, focusing on defense spending, “law and order” policing, and deficit reduction. The Utah Democratic Party voted to endorse an anti-abortion, anti-gay, former CIA and GOP staffer and independent Senate candidate Evan McMullin to go up against Trump Republican Mike Lee, rather than put forward their own nominee. Democrats’ tried-and-true strategy is to make concessions to their right rather than risk empowering their left. But this just serves to legitimize the arguments of the right while demobilizing the left.

And what about their left? Progressives in the House had real opportunities throughout 2021 to push for gains for the working class in the immediate aftermath of the devastating impact of 2020. But their short-lived stand to force Build Back Better ended in surrender to the party establishment. The Squad and Bernie Sanders’ increasingly pliable approach in the halls of Congress has allowed the left flank to be dragged along the Democrats’ rightward march. The Congressional Progressive Caucus spurned Nina Turner’s candidacy, and seems unlikely to play a fighting role in pointing the way out of an ugly right-wing advance which would require breaking ranks with their own party.

The Democratic consultant class has already come out swinging against progressive demands, to the familiar tune that “radical” slogans like student debt cancellation and ending racist policing are totally unwinnable. The left will once again have to tire itself out insisting that bold climate legislation, economic relief, and Medicare for All win elections – but these efforts will once again have no substantial impact on the party’s strategy.

How the Right Can Be Beat

Here’s why the right is winning battles: they fight like hell. They’ve been packing school boards and statehouses. Their representatives stage walkouts and noisily dissent from their party leadership to force concessions. Trump vowed to call for  “the biggest protests we have ever had” in cities across the country if January 6th conspirators were prosecuted. The Trump-allied Conservative Partnership Institute is holding “election integrity” summits across the country in the run-up to the midterms to mobilize right-wing vigilantism to the polls in key states.

The Democrats seem to be fine with things the way they are. But as we can see from the upsurge in labor struggle, walkouts for women’s rights and LGBTQ rights, and BLM which became the largest protest movement in U.S. history just two years ago, millions of us are not. We can’t resign ourselves to going down with the Democrats’ sinking ship. The right-wing gains from Biden’s presidency should tell us more than anything that change is not decided by who’s in office, but who is organized and willing to fight for their demands.

The right-wing growth that poses a real danger to our lives could be stopped in its tracks with the right strategy: provide a real left alternative to address concerns of working people who would otherwise be captured by the right, restore confidence of the left and young people, and activate the millions of working people who see no ally in either corporate party.

The situation is ripe for renewed efforts to establish an independent party for the left and working people. Continuing to place our faith in the Democratic Party of political cowards and right-wing enablers to point the way out is nothing but a trap set by those who’d rather see things continue along this path than risk a threat to the status quo. They will not build a grassroots reproductive rights movement in this country to demand free abortion on demand. They fear that using their positions to empower a working class movement for trans rights might do more than just beat back the bigoted attacks, but fight for quality trans healthcare through Medicare for All. Mobilizing young people would require engaging their most urgent demands, but this could in turn put student debt cancellation and serious climate action on the agenda even more sharply which is a risk the establishment is not willing to take. These movements, which are being held back by the Democratic Party’s opposition, can form the basis for independent politics.

Neither party promises anything but despair for working people. The crisis of disillusionment is a crisis of capitalism. Missed opportunities from the left to build a movement against capitalism create openings for the right, and working people whose problems will ultimately not be solved by right-wing leadership, pay the price. Workers getting organized at Starbucks and Amazon are showing there has never been a better time for working people to take control of our future.