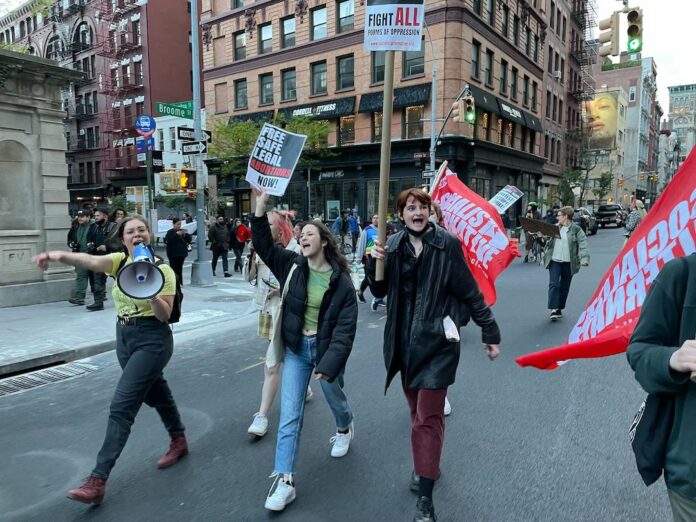 As a young woman in Texas in the wake of SB8 taking effect in September, and now seeing the wholesale destruction of Roe v Wade on the horizon, it has never been clearer to me that the Democratic Party is a dead end. This situation, and mass anger at the Democrats’ inaction while they are in power, cries out for an all-out struggle to build a party of our own that actually fights for the interests of women.

On Monday, a draft majority opinion leaked to Politico confirmed what many feared as the worst-case scenario: the Supreme Court has taken a preliminary vote to overturn Roe v Wade. This means that abortion would be banned in 22 states, essentially overnight. The anti-abortion extremists want to roll back the clock on women’s rights and deny bodily autonomy to literally millions living in states like mine with existing – not to mention many shocking and draconian – abortion bans.

But the right won’t stop at banning abortion in Republican-dominated states. If the leaked decision stands, it will provide the legal justification for overturning Obergefell, the Supreme Court decision that legalized gay marriage. Ultimately, the right is organizing to ban abortion nationwide and to broaden the onslaught of attacks on LGBTQ people.

“What? But this is coming from Republicans!” Exactly. I’ve seen the unhinged misogynistic psychopaths on the right like Alito and Kavanaugh (whose appointments to the Court the Democrats rolled over for) who want women to be submissive incubators of the next generation of workers to exploit. But then I turn around and see the “good cop” blue politicians say that giving the psychopaths free rein is essential to our thriving democracy. When you show me Republicans and Democrats, I see criminals and their accomplices. Pinning hopes on the Democrats, after watching Biden campaign on codifying Roe and then sitting idly as this attack plays out, feels like a hostage situation.

Since SB8 was passed in Texas, abortions in the state have dropped 60%, the average driving distance increased by 14 times (to say nothing of the price of travel made worse by record inflation), and then the neighboring state of Oklahoma passed its own horrific ban, cutting off a primary haven for women seeking abortions out-of-state. Here’s what Joe Biden – the second consecutive accused rapist in the White House, a Hyde Amendment champion, and seemingly allergic to saying the word “abortion” – did to address this acute crisis.

“I directed my Gender Policy Council and White House Counsel’s Office to prepare for options for an Administration response to the continued attack on reproductive rights…We will be ready when any ruling is issued.”

Roe v Wade is already null for one in ten U.S. women of reproductive age, but how comforting it is that Biden formed secret plans behind closed doors that he’ll hold off on revealing until abortion rights have been totally destroyed nationwide. We’re supposed to believe these people are on our side?

What will they do? Well, statements from Pelosi and Schumer as well as Biden both started out with attempts to cast doubt on the validity of the leaked document in a naive denial of the attack we all saw coming. The Supreme Court has since verified its authenticity.

Schumer and Pelosi were reluctant to call for next steps. Since their initial statement on Monday night, Schumer has come out with a noncommittal plan to hold a Senate vote on codifying Roe at some vague point in the future. They’re waiting to see if public outrage tides over, if they can convince Emperor Manchin, or if they can cook up a diversion to look like they’re doing something. They need time to figure out what to do next – although they’re fine with pregnant people nationwide not having that privilege.

But one thing we can be sure of is that come election time, if they don’t win, they’ll blame all of this on us. In his statement on the leaked Court draft, Biden says, “it will fall on voters to elect pro-choice officials this November.” They’ve harbored an anti-choice wing in their party for decades, and the DNC is bankrolling anti-abortion candidates this midterm cycle. Nancy Pelosi was just in Texas this week campaigning for anti-choice Democrat Henry Cuellar who’s facing off against a progressive, pro-choice challenger.

We didn’t screw this up – they did, while the rest of us were just trying to get by. Those “Grace, it’s urgent” fundraising emails asking me to line the pockets of the “party of Roe” are landing like a kick in the uterus. Mark as spam.

When I was twelve and in sixth grade and I’d just learned the word “feminism” and about the fight for abortion rights – when it was just dawning on me what being a woman was going to mean for my future – Obama promised unequivocally that guaranteeing abortion rights through federal legislation was a day one objective of his administration. He backed out of this promise, leading us right to the situation today. I’m sick of seeing women, queer and trans people, the poor, and the oppressed being punished for the Democrats’ mistakes while they serve as the primary obstacle suppressing a real fightback.

This isn’t about historical precedent or the stability of our constitution, it’s about the lives of millions of people – women, their partners and families, trans and nonbinary people who can get pregnant, and the whole working class. It is up to working people to launch our own organized struggle in the name of healthcare, bodily autonomy, and liberation from capitalist oppression.

In the immediate aftermath of the shocking news, many are donating or making calls for donations to abortion funds that help vulnerable people hit hardest by the bans afford abortion care including arranging travel out of state. The solidarity inherent in these actions is absolutely positive, but donating cannot be mistaken for a movement strategy. Underground networks aren’t a substitute for rights. Working people by capitalism’s very nature can’t get by on the resources afforded to us by the ruling class, and the only way to accomplish the goal of free, safe, and legal abortion for all is by launching all-out social and class struggle against the right wing and the political establishment.

We need to launch an offensive fight to take what is rightfully ours – our right to our bodies and our lives. Crucially, this means we have to hit the streets. We can and should take inspiration from mass movements from around the world and from the U.S. in the 60s and 70s that have succeeded in forcing the hands of reactionary state institutions to enshrine the right to an abortion.

We need to be organized. It’s not nearly enough to blow off steam in the streets without following up with mass public meetings to discuss strategy and to resist co-optation of the movement by Democrats or NGOs. Our movement won’t survive without democratic structures in place to sustain the momentum.

In fact, our protests will need to take the Democrats head-on. They are the main obstacle to codifying Roe at the federal level, and they need to be relentlessly pressured to abolish the filibuster and immediately pass guaranteed abortion rights nationwide.

We need the unions and the newly revitalized labor movement to throw everything they have behind this movement. They can open up union halls as meeting venues for activists to determine next steps, they can mobilize their members to the front lines. We will need a host of coordinated tactics to win, including strikes, campus walkouts, workplace actions, and mass courthouse occupations that don’t end until we have our demands met. Abortion clinics, themselves under threat of extinction from these attacks, must organize noncompliance backed up by grassroots community defense.

The only rights we can count on are the ones we claim for ourselves and fight like hell to defend.