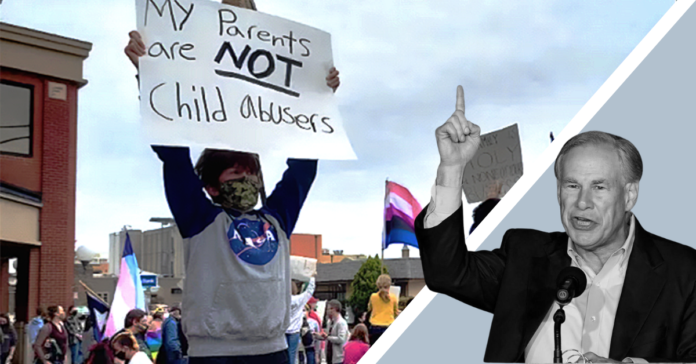 On February 22nd, Texas Governor Greg Abbott declared open season on transgender children and their families. Following a nonbinding legal opinion from Attorney General Ken Paxton, Abbott published an order directing the Department of Family and Protective Services (DFPS) to begin investigating families who provide gender-affirming healthcare to trans kids for “child abuse.” This included a call for all mandatory reporters as well as “members of the general public” to report parents of children they suspect of receiving this care.

Neither Paxton’s opinion or Abbott’s directive are legally binding, but this fact has hardly mattered: providing trans kids lifesaving gender-affirming healthcare has effectively been banned and parents of trans children are at risk of having their children taken away from them. The DFPS Commissioner followed up with a statement that the agency will follow Abbott’s orders. The Department had already set off alarms by quietly removing an LGBTQ crisis hotline from their suicide prevention resources webpage. The largest pediatric hospital in the state, Texas Children’s Hospital, has already pulled all hormone therapies for trans minors.

The day after the order, a DFPS employee approached her supervisor to ask for clarification on the order. Within hours, she was placed on leave and informed she was subject to investigation for “abuse” of her 16 year-old trans daughter. The next day, a CPS investigator was at the door. Reports are trickling in, followed by investigations that place families at immediate risk of losing their kids.

Texas has the fourth highest population of transgender youth of any state. Trans children and their families are already at heightened risk of discrimination and harassment. Now, they are being targeted by state agencies with the power to shatter their lives.

As soon as a report is made to CPS, its investigators have sweeping power over what happens to the family, who are overwhelmingly likely to be low-income and people of color. An overzealous agent who inspects the home or goes to the child’s school to search their backpack and finds a bottle of prescribed hormone pills can take them away or arrest the parents on the spot on the basis of Abbott’s mandate.

The mother of an 11 year-old trans girl in Austin said “talking to [her daughter’s] therapist is not an option right now,” with the risk that they – or the therapist – could be reported. She told reporters, “We’re ready to move.” Several “trans refugee” families have already left the state in recent years seeking refuge from transphobic threats.

The snowballing attacks on trans youth by right-wing legislatures across the country have grown into an avalanche. In Arkansas it is now perfectly legal for doctors to discriminate against trans minors by outright refusing care. Idaho is poised to pass a bill that would put doctors who treat their young trans patients at risk of felony charges. This is an acute crisis with life or death implications. As much as 72% of trans and nonbinary youth experience depression, and an astonishing half report having seriously considered suicide. Access to puberty blockers and hormone therapy have been shown to reduce the risk of depression and suicidal ideation by 60% and 73% respectively.

Abbott’s directive came out exactly a week before the March 1 primaries. Faced with a Trumpier-than-thou challenger, Abbott has spent the past year making every effort to neutralize pressure from his right by making his administration the vanguard of attacks on the marginalized. The rights of trans youth, abortion rights, and voting rights all suffered major blows in the 2021 legislative session. This delivered Abbott an easy win in the Republican primary, a war chest of campaign cash, and a likely gubernatorial win against Beto O’Rourke later this year.

Among the 50 anti-trans bills proposed by the Texas legislature last year, one would have sent parents to prison and had children placed in foster care if they are allowed to transition. The bill failed, and this is the new means to Abbott’s end. One campaign official praised Abbott’s DFPS order as a “political winner.”

But the stark reality is that most people in Texas oppose the government’s assault on abortion rights and on transgender adolescents. A majority of Texans support LGBTQ protections. What’s happening in Texas is not working people moving to the right; it is representatives of a corrupt political establishment pandering to a rogue right-wing Trumpist base so they can stay in power to do the bidding of oil and gas lobbyists. That’s what people are suffering for.

The right wing has even begun to take the offensive in the courts. On March 9, Attorney General Paxton filed a lawsuit seeking to prevent legal opposition to the anti-trans investigations, in an arch-conservative court. The letter also suggests the attacks will continue and will be focused on allowing bosses and private companies to engage in anti-trans policies.

The flood of attacks is exacerbating an already desperate situation for trans and nonbinary young people. LGBTQ youth are twice as likely to experience homelessness, with family rejection as the most common cause. They are overrepresented in the child welfare system and more likely to experience trauma and violence once in the system. Just one in three LGBTQ youth report living in a safe household that is supportive of their identity – and now it’s being ripped away from them.

The number of anti-trans bills introduced by Republicans in state legislatures skyrocketed in 2021, which 85% of trans and nonbinary youth say has negatively impacted their mental health. How does a young person cope with powerful officials condemning, in the most grotesque and alarmist terms, their ability to go to the doctor, compete with their sports team, or use the bathroom as threats to society? The scope of the harm inflicted on young people by this constant dehumanization is unfathomable, and it is the result of a shameful system that shows itself time and again as profoundly incapable of keeping LGBTQ children safe.

Like every twisted attack against working people in Texas and elsewhere in recent months, there has been a crushing lack of response in relation to the scope of the situation. Joe Biden denounced Abbott’s order as “government overreach,” and simply called on Texans to file federal complaints to HHS – an option available only after they’ve been targeted for investigation. Nonprofits like the ACLU and Lambda Legal have taken up legal cases against the order. But now, after 6 months of living in the shadow of the abortion ban and its devastating consequences, a condemn-and-sue approach is a nonstarter when right-wing bigots are descending like vultures on vulnerable trans kids. The hard ultra-right wing saw they could take away abortion rights without much opposition from Democrats and nonprofits; now they are coming after trans youth, with future attacks certain until they finally meet real resistance.

This passivity could not be further from the attitude of young people who are eager to take up this fight. One in 5 Gen Z adults is LGBTQ, and youth have so far led the way in pushing back against the attacks in schools.

In September 2021 at Temple High in central Texas, 16 year-old Kendall Tinoco who had been using the girls’ bathroom since 7th grade, was barred by a teacher from the girls’ locker room. She posted about it on Instagram. Days later her classmates staged a massive walkout in protest, with flags, banners, and chants in support of trans rights. Hundreds of students in Irving marched that same month to demand reinstatement of two teachers who were removed in retaliation for refusing to take down stickers that designated their classrooms as safe spaces for LGBTQ students.

Texas House candidate Jeff Younger, who has shamefully claimed “there is no such thing as a transgender person” and who misgenders his own trans daughter, was shouted down by students at a March 4 appearance at the University of North Texas where he had planned to tout the dangers of progressive ideas around gender and advocate criminalization of gender-affirming care.

Demonstrators marched at the state Capitol after Abbott’s order, overwhelmingly teenagers and their families. A trans teenager who organized the march said, “Republicans take away our rights to rile up their base and Democrats virtue signal while doing nothing to actually help us.”

Resistance is the Only Option!

Abbott and his cohort are testing the limits of public compliance, and they will not stop until threatened with serious defiance. In reality, Greg Abbott is only as powerful as working people allow. The burden of determining the extent of the damage this cruel mandate inflicts on families and their kids will unfortunately fall on the working adults who are expected to enforce it. Teachers, nurses, doctors, daycare providers, state employees, counselors, and social workers – the thousands and thousands of mandatory reporters in the state – as well as adults in school communities and neighborhoods would need to answer Abbott’s call to put his agenda into motion. The buck stops with them.

The establishment is banking on being able to effectively weaponize social polarization and individuals’ anxieties to implement their agenda. Many of these workers are now caught in a bind – those who work with trans children will have to choose between subjecting a loving family to devastation at the hands of the state, or risk sacrificing their jobs or being criminally charged with failure to report. The only solution to this is to organize mass noncompliance within the workplace. Discussions must be had in workplaces and among colleagues, building support for organized noncompliance, on the principle that an injury to one is an injury to all. They can’t go after everyone.

Teachers unions must firmly, publicly declare they will not comply with this order, and prepare a fight to stand their ground alongside students and parents. State employees must do the same, and take up the fight at the ground level – not just in the courtroom –  to demand reinstatement of the DFPS employee removed and investigated. This could include coordinated refusal to investigate families of trans youth or even walkouts to stop the attacks and put pressure on Abbott. Pediatric doctors and nurses must organize in their hospitals to demand reinstatement of hormone therapy and refusal to share minors’ private medical information with the state. These struggles and others like them could be the basis for desperately needed rebuilding of the labor movement in Texas. Continued school walkouts and student organizing will also be necessary to build momentum and confidence of the movement, and send a strong signal across the country that these attacks will not stand, in Texas or anywhere.

“Protecting children” has become an ominous rallying cry behind not only this attack, but the crusade against critical race theory, the book-banning frenzy, and criminalization of abortion based on the falsehood that an unborn fetus is a child in need of saving. It is up to working people to expose these lies by pointing to an alternative.

A society genuinely concerned with protecting children would have universal childcare, living wages and union benefits for parents, and paid family leave. Trans and nonbinary youth deserve trans-inclusive Medicare for All, fully funded public schools with adequate and LGBTQ-friendly support staff, and robust social services. This type of society would ultimately need to do away with capitalism altogether – the system that relies on alienating us from one another, from our bodies, and from the value we produce as working people. Young people deserve to thrive without carrying the burden of this system that peddles in social sickness in the form of racism, sexism, homophobia, and transphobia.