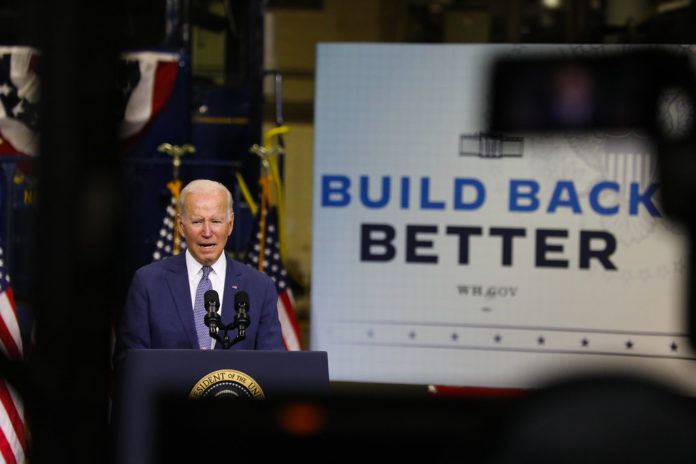 Yesterday, after months of Democrats negotiating down key provisions in Biden’s signature “Build Back Better” plan, West Virginia Sen. Joe Manchin went on FOX News and announced his opposition to the bill altogether. With Manchin’s final “no” vote, the bill will not pass this year, and may not pass at all.

The “Build Back Better” plan, named for Biden’s campaign slogan, began as a larger $6 trillion reconciliation bill that included free community college, a relatively strong though still inadequate climate program, an extension to the popular child tax credits, universal pre-K, 12 weeks of paid parental and family leave, and expanded Medicare eligibility and coverage. However, by November, the Democrats had removed the vast majority of programs that would help working people, and completely slashed any meaningful action against climate change.

While the Biden White House’s response to Manchin’s announcement weakly called him back to the table to negotiate, Sen. Bernie Sanders’ response – to simply let Manchin “vote no in front of the whole world” – has unfortunately encapsulated the failure of Congressional progressives to effectively fight for what working people need. The watering down of “Build Back Better,” even with the Biden administration kowtowing to oil barons like Manchin, could have been avoided if progressives like Bernie and AOC had led a working-class movement to defend and expand the positive elements of the bill.

After watching Manchin staunchly oppose popular policy and desperately-needed programs for months on end, it is hardly likely that watching him vote down a bill that is now largely empty would do anything more to expose his unconditional servitude to big business. However, the fact that Manchin could sabotage the signature legislation of his own party’s administration, and face nothing more than shrugged shoulders from Biden, Schumer, and Pelosi, once again demonstrates to millions where the interests of the Democratic Party lie.

If this was somehow insufficient proof that the Democrats are a party of big business and inaction, we can look to two other major betrayals of the Biden administration this past week alone. The administration publicly abandoned campaign promises to cancel student debt, and then restarted student loan payments that had been paused during the pandemic, which will leave millions of people with massive financial burdens as the omicron wave of COVID-19 threatens to cut incomes once again. Not only does this supreme failure to pass any meaningful relief reflect the emptiness of the Biden agenda and the promises of the Democratic Party, it leaves the door wide open for the right wing to capitalize on their betrayals, laying the groundwork for right-wing and far-right candidates to win sweeping majorities in the midterms.

It’s been more than a year since the Democratic Party won both the White House and a Congressional majority, and thus far, working people have nothing to show for it – save for a one-time check and child tax credits that will now expire. The likely death of the “Build Back Better” plan, on top of this year of inaction, shows the concrete and immediate necessity of an independent party for working people that can not just promise change, but actually fight for and win it, rather than be hamstrung at every turn by loyalty to big business.