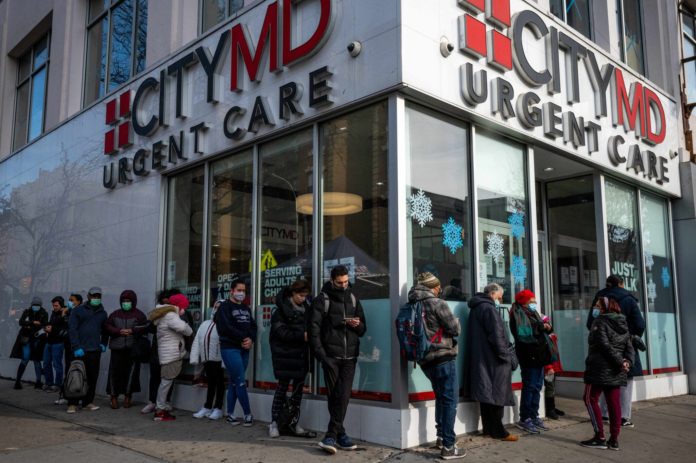 “Everyone has COVID.” If you live in New York, you’ve heard or seen someone say this in the last 24 hours. For the second day in a row, the state broke its single-day COVID case record.

Just like in March 2020, New York City is giving us a glimpse into what lies ahead for the rest of the country. Yet unlike March 2020, we have tests, vaccines, protocols, masks, and an understanding of the science of this virus. To any thinking person that should signal that we’re in a good position to weather this particularly bad wave.

Unfortunately, that’s not the case. Democratic Party leaders have allowed the city’s free testing infrastructure to collapse as part of their arrogant “vaccine-only” COVID strategy. They’re geared up to restart evictions in just a few weeks, and public healthcare workers have still not received a cent in hazard pay. This is also in the context of an official unemployment rate of 9.4%, twice the national average. Extended unemployment benefits including for gig workers and independent contractors ended months ago. Hundreds of thousands in the city are facing a dire winter.

As Socialist Alternative warned since the early days of the pandemic, anything less than a public, global vaccination campaign would doom us to ongoing waves of needless death. Unless the most effective vaccines are rapidly manufactured and distributed on every corner of the globe, new variants will inevitably emerge. Tragically, this is exactly what has happened.

The Democrats, riding the coattails of Republican incompetence, took office in 2021 on the basis of their promised “solutions” to the COVID nightmare. And while they benefited from a ramping up of vaccinations and managed to pass a renewal of COVID relief to ordinary people, Biden proudly continued Trump’s “America First” strategy.

Biden and his political equals in the EU, UK, and Canada starved the majority of the world’s population of effective vaccines. They snatched up 96% of Pfizer and Moderna doses as soon as they hit the market and then doubled down on their vaccine hoarding policies.

Capitalist world leaders fought viciously against lifting the patent restrictions on these life-saving vaccines – something that would’ve allowed countries in the neocolonial world to manufacture them at home. While Biden, under pressure, eventually called for a suspension of the patents, he didn’t lift a finger to fight for it. These policies have left the vast majority of the world unprotected against this virus either through obscenely low vaccination rates or through a reliance on the least effective vaccines. It is now reported that, except for Pfizer and Moderna which use advanced mRNA technology, all other vaccines including AstraZeneca, Johnson & Johnson and Sinopharm/Sinovac, will have little or no effect in preventing infection from Omicron, This is a disaster for countries in Latin America and Asia which have relied almost exclusively on these vaccines.

As scientists in South Africa were first raising alarms about a dangerous new variant in mid-November, Pfizer and Moderna had delivered less than 1% of their total supplies to low-income countries. South Africa has a vaccination rate of just 26%. And this is high for an African country! Across the continent, just 7.5% of people are fully vaccinated.

The World We Deserve

We asked the question in May of this year, “Can Capitalism Solve a Plague?” As we stand on the edge of a nightmarish reemergence of COVID, the answer appears to be a resounding “no.”

Through a combination of greed and incompetence, world leaders have entirely failed to minimize the death and destruction wrought by COVID. Their allegiance to the demands of big business – to restart the economy, to maximize profit, to wrap up relief to ordinary people – has meant rational measures to protect our lives have been thrown out the window.

It is shocking that more Americans have died of COVID in 2021 under Biden than in 2020 under Trump. And the year is not over! Of course the Republicans seek to weaponize vaccine skepticism as part of their reactionary agenda but the Democrats’ failures are now opening the door to the Trumpists.

Capitalist world leaders are criminally negligent in their handling of this pandemic, and after the shock of this most recent hit settles, ordinary people’s despair will turn into indignation.

Our rage against the lives lost for big pharma’s profits, against sky-high prices and low wages, and against complete and total political inaction can become the motor force for titanic social change. But it has to be directed.

We need a new political organization for the working class, independent of both crooked parties of big business. An organization we can use to fight for our immediate needs:

And with a mass, working class organization our sights can be set far higher.

The disorganization and greed of the capitalist elite cries out for the masses of ordinary people to intervene. Through the socialist transformation of society, working people can plan a world that is truly rational, equitable, and healthy.