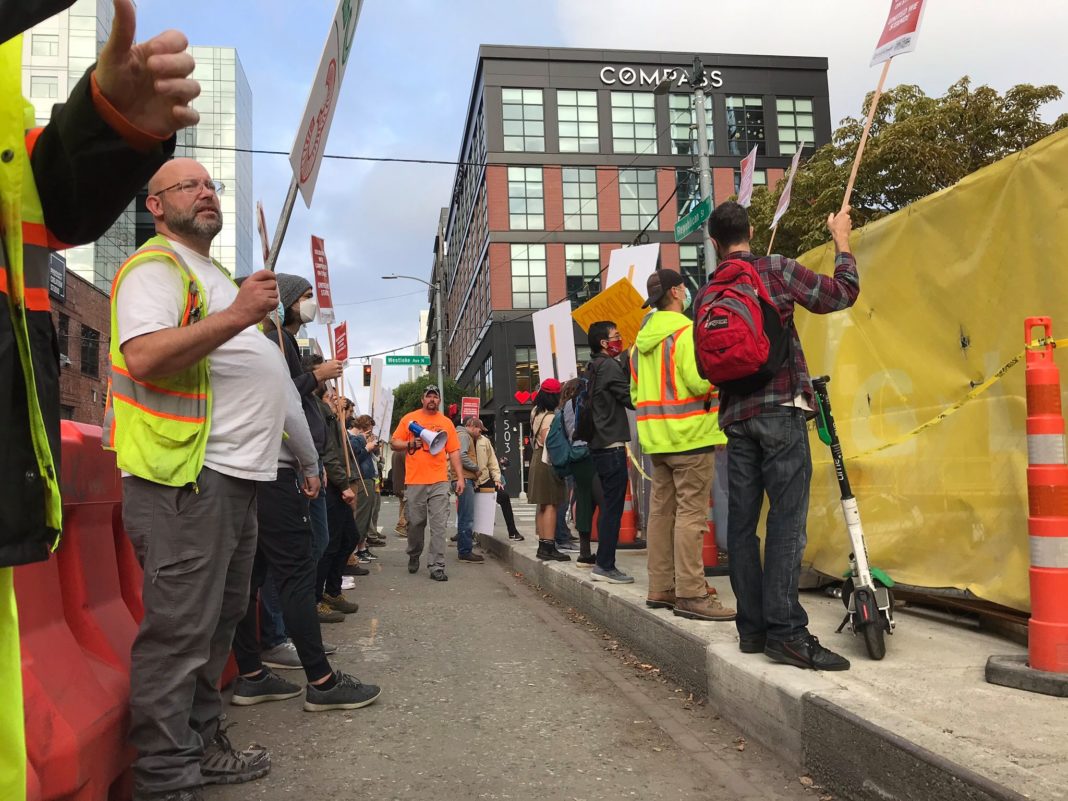 Below is the text of a speech delivered by Joe Sugrue, a member of the Seattle Education Association who spoke in a personal capacity at a solidarity rally with striking carpenters. View the speech here at 1:00:00.

Sisters, Brothers, Siblings, everyone who is here today in solidarity with the carpenters,

My name is Joe, I’m an elementary band and orchestra teacher in Seattle Public Schools and a rank and file member of the Seattle Education Association speaking in personal capacity. Rank and file SEA members have written a letter of support for the carpenters and are circulating it around the union as we speak, and teachers are here today, many behind me, to stand wholeheartedly with you, the carpenters, in this courageous struggle against the bosses.

In the labor movement we have an important slogan: An injury to one is an injury to all!

As workers, we are on the same side of class battles and we are stronger when we fight together. This doesn’t mean that we don’t have debate or discussion amongst each other or with our coworkers about the best way forward for our movement. But it does mean that we discuss the way forward knowing that ultimately this is a struggle against the bosses, the big owners, and the billionaires. So when the carpenters go on strike, the teachers, and the nurses, and the transit riders, and the postal workers, and the other building trades should all show up to make their movement stronger, just as they would show up in solidarity with us.

My brother spoke earlier about the West Virginia teachers who went on wild-cat strike in 2018. They were tired of low pay, the slashing of their healthcare, the requirement to purchase the school supplies for their own classrooms–which reminds me a lot about this struggle for free parking–and the overall budget cuts to public education at the same time as tax cuts were being given to corporations and the super rich, which is still going on today.

The teachers had a lot stacked against them. The union leadership initially refused to back the rank-and-file strike. In addition, going on strike–period–for any public employees in West Virginia was, and still is today, illegal. But this did not stop the workers.

The courageous 8 day strike ended up defeating the attacks on the worker’s benefits and funding, and they also won a 5% wage increase not only for themselves, but all public employees in the state of West Virginia, demonstrating again the ability of the labor movement to fight for all of us.

We have to draw out the important lessons of how their strike was successful.

First, months before the strike took place, the teachers took a systematic and disciplined approach within their buildings and their districts to build democratic structures and ways of communicating with each other. They built solidarity within their ranks and within the broader community, which further points to the importance of this rally today. But our strike here today was not prepared by the leadership for months beforehand. And so the question now is how do we get more organized and build these democratic structures?

Second, a major reason why the strike won was because within the first few days of the strike, all 55 counties–every single county and every single public school in the entire state–was on strike. Their slogan was 55 United. They were not 55% united, they were not 17% united, they were 100% united, 55 Counties strong and 55 counties united. And so that’s why we’re saying All Out Stay Out. We can’t be ignored or pitted against each other by the bosses or the establishment when we’re united. All of the job sites covered under western Washington carpenters’ contract need to be shut down in order for the strike to be successful. And they need to be shut down every day until the strike is over.

In West Virginia, because of mistakes made in previous struggles, the teachers knew that it was not only morally right, but strategically imperative as well, to have all school staff including custodians, cafeteria workers, administrative secretaries, school psychologists, bus drivers–all staff out on strike with them. Carpenters need continued solidarity from all workers in the building trades to be All Out Stay Out on these job sites. And already, we’ve seen wonderful solidarity at the pickets and job sites.

Eventually, their power was so strong that union leadership had to take their side. With the union behind them they had the resources they needed to stay out until the strike was won and to stay 55 united.

Thirdly, the victory in West Virginia shows that there really are no illegal strikes, there are just unsuccessful ones. There are defeats, but there are also victories, even when there are not “supposed” to be–even when workers are not “supposed” or “allowed” to go out and fight. As union members, and my brother spoke about this earlier, we have to protect our right to withhold our labor because it is the strongest tool we have to fight for progressive change.

And there’s one last lesson we should take from West Virginia. It is not necessarily a lesson about tactics for the strike right now, but a lesson about inspiration and the power of working-class struggle.

After the success of their strike and the gains that they made for working people across the whole state, teachers and school staff from around the country looked to West Virginia and said “Ya know what, we’re gonna fight too!” In Arizona, in Oklahoma, in Kentucky, in North Carolina, in South Carolina, in Oregon, in Chicago, here in Washington, in Los Angeles and Oakland teachers went on strike too. The struggle spread to other unionized sectors like Stop and Shop grocery workers in New England, to General Motors workers all over the country.

And so this is what AGC, and the establishment, and the billionaires in Seattle are afraid of. This is why they’re actively fighting against us, or passively observing–which is really just as hostile. They see the Frito Lay and the Nabisco workers struggling, they see the attempts of Amazon warehouse workers to unionize in Bessmer, Alabama, the massive anti-racist and anti-sexist struggles over the last few years, and now this courageous carpenter’s strike here in Seattle, Washington, home to the richest man on the planet. Just like the 1934 general strikes in Minneapolis, San Francisco, and Toledo, that were the spark of a fighting labor movement for decades, the establishment sees the rumbling and fears the spark–