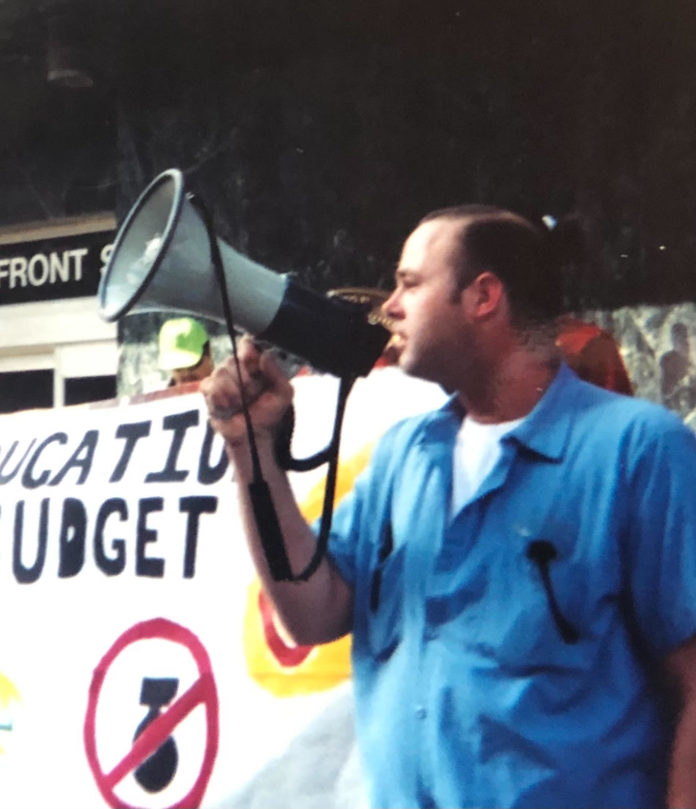 The labor and socialist movements have lost a fighter who, for almost 30 years, dedicated his life to the struggles of working class people. Jeremy died in the last week of August in his hometown of San Diego, California, aged 50.

Jeremy Prickett was a proud former member of the Teamsters at UPS, and then an International Association of Machinists and Aerospace Workers member at Solar Turbines and Boeing.

He was a former leader of the Campaign for Renters Rights in Oakland, and a leader of the California Coalition Against Poverty in San Diego. He fought housing foreclosure battles as far afield as Indiana and New Orleans.

If there was a fight against the landlords or the bosses Jeremy was there.

Jeremy joined Socialist Alternative, then called Labor Militant, in the early 1990s. The Stalinist regimes had folded like a deck of cards and capitalism was triumphant. This was a very difficult period for Marxism and revolutionaries, when far more people were walking away from struggle than joining it. In those days we looked to win small victories in a sea of generalized retreat.

Within Socialist Alternative, Jeremy has a legendary reputation for his role in helping secure Kshama Sawant’s 2015 Seattle re-election. He drew together his life’s experiences, and poured that wisdom and energy into the campaign. At a campaign rally Jeremy explained, “It’s a privilege for us to be here today – because for so long politics have been out of the hands of working people. Socialist Alternative and Kshama Sawant are changing that.”

It is no exaggeration to say that his untimely death has created a huge wave of sadness through the organization. Dozens of comrades have stepped forward to comment on Jeremy’s personal attributes: his voluminous kindness, his infectious humor, his eagerness to fight for what’s right. Many described his tenderness towards ordinary people and his willingness to go toe to toe with the bosses and their lackeys.

Perhaps Jeremy’s most important legacy in Socialist Alternative is the role he played in assisting in the political development of less experienced comrades. Jeremy’s decades of experience in class struggle and his superior ability to explain complex ideas in the language of everyday people gave him the skills to be a mentor in the organization.

Everything Jeremy did or enjoyed, he did as a Marxist. He was a huge sports fan, often writing and speaking on how capitalism shapes and ultimately ruins sports. He used sports to explain Marxist economic principles in an article titled, Why a 50-cent coke costs $4 at the Game, and organized a Socialist Superbowl party fundraiser.

He had no time for bullshitters: those for whom the movement is a place to pass their time and to exercise their egos. Jeremy was a genuine team player, someone for whom his ego was never at the center of a disagreement. He was a larger than life figure, a comrade who was hugely respected, but one who was always open to criticism or being challenged. And if there was a newer comrade in the room that looked isolated, it would be Jeremy who would be there with a wide smile and some small talk to make that person feel welcome.

Jeremy was an all-round Marxist who was at home organizing workers in a factory or talking to tenants organizing against their landlord.

As a toolmaker, Jeremy was a highly skilled craftsman. The accuracy of his work meant the difference between a plane that flies and one that doesn’t. This same attention Jeremy gave to helping organize his coworkers.

That combination of humility, humor, and insight made Jeremy popular with his coworkers. They gave him their time to hear his ideas, and his ideas made sense, even when they weren’t ready for them.

Jeremy immediately toured the plant and talked to all the other shopfloor union activists. As a socialist, Jeremy recognized the power of the working class was constantly being undermined by the bosses promoting divisions. The workers: white, black, Latino, Asian, united to boycott the canteen until management allowed workers to talk in any language they so wished.

A few days later the bosses relented. This battle may have been won without Jeremy, but Jeremy, as a Marxist, recognized the critical importance of working class unity, of workers’ self-organization, and of even the smallest of victories over the bosses. As Jeremy often explained, a worker armed with Marxism does not accept the ownership of the plant by the factory bosses. Unlike union leaders who accept that the employer has to be able to make a profit, socialists like Jeremy fight the boss without one hand tied behind our backs.

In 2004, Jeremy helped organize dozens of Section 8 families into a huge battle to save their vouchers in the city of Alameda, California. The tenants marched on the Housing Authority leaders’ home, they occupied the Mayor’s office and they threatened to disrupt the city’s Fourth of July parade. Finally the city flew a representative to DC and he came back with the funding to stop the evictions. Jeremy was critical in helping keep 238 families in their homes, overwhelmingly Black single moms and their kids. And the tenants loved Jeremy like family.

Within weeks of Hurricane Katrina hitting New Orleans in 2005, Jeremy was in his truck driving to Louisiana to help fight the inevitable land grab from Black people by Big Property. Jeremy’s 3-month trip was funded by donations from the Carpenters Union and socialist activists.

New Orleans was like hell. Road signs had blown away, cars were in trees. 30,000 people were evacuated and landlords were busy literally using forklifts to empty 2nd floor apartments of people’s belongings. Jeremy was there in the thick of it, organizing tenants, calling out the landlords, the police, the national guard, and putting his life at risk.

Journalists from New York’s Village Voice and the UK’s Independent newspapers rode shotgun with him as he and other activists drove across the apocalyptic scene, helping renters in a near open war. The Voice described Jeremy as a “machinist and Marxist from Alameda.”

In a different era, our Marxist comrade Jeremy Prickett would’ve been a labor leader of national significance. He came into politics in the darkest era for unions, the 1990s.

Politics develops by people and through people. We are all lucky to have lived and worked alongside this great revolutionary working class leader. His early death is a tragedy for him and his family, for members of Socialist Alternative, and for the thousands of lives he helped improve.

For many years Jeremy struggled with his health and this was not the first time he faced his demise. But this time he was unable to beat the odds. He is deeply missed by so many of us.

Jeremy signed up for socialism for life and beyond. His family told us that instead of flowers they will be directing people to Jeremy’s lifetime cause, our organization, Socialist Alternative. Please consider a donation in Jeremy’s name, it’s what he would want.

We love you Jeremy.