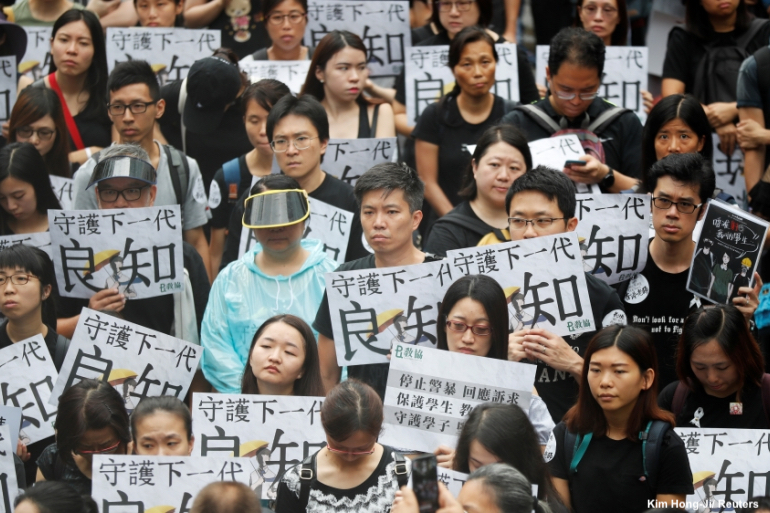 Only mass organized resistance and solidarity can withstand the Chinese dictatorship’s attacks on trade unions and democratic rights.

Solidarity Against Repression in China and Hong Kong, ISA

BREAKING NEWS: On August 10, after this report was published, the HKPTU leaders formally disbanded the union, which was founded in 1973. This disastrous state of affairs was unfortunately already clear, as our report says, from the union leadership’s previous capitulation to the outrageous attacks and smears of the government. This further underlines the urgent need for a completely new approach in order to rebuild trade unionism and anti-authoritarian struggle, an approach based on working class struggle and solidarity, especially linking Hong Kong and mainland China workers, with close links to the workers’ movement internationally.

On July 31, 2021, China’s regime-controlled media launched an attack on Hong Kong’s biggest trade union, the Professional Teachers’ Union (HKPTU). Using fascistic language, People’s Daily, the main daily newspaper of the “Communist Party” (CCP), called the PTU a “malignant tumor” which must be “eradicated”. The CCP’s accusation against the union, which is typical of its “outside instigators” propaganda, is that the PTU incited its members and Hong Kong’s students to revolt against the dictatorship, in particular during the 2019 mass protests which brought more than two million people onto the streets. Anybody who took part in these protests knows the PTU leadership did not play any such role and was instead a brake on the struggle.

Dancing to its master’s tune, Hong Kong’s Education Bureau executed the regime’s will only hours after the People’s Daily attack, effectively de-recognizing the union, which has 95,000 members and represents 90 percent of teachers in the city. The Education Bureau and the rest of the Hong Kong’s puppet government aim for full “mainlandization”, which reflects the political will of Xi Jinping’s dictatorship: to wipe out all traces of democratic rights that have existed, tenuously, in Hong Kong for several decades as an exception to the rule in China. Trade unions, apart from the fake police-state “union” ACFTU, are completely illegal in China.

“The PTU is the only union in the pan-democratic bloc which has very strong organizational power. It can effectively disseminate messages to members, offering substantial support to the movement,” says PTU member and political commentator Ivan Choy Chi-keung of the Chinese University of Hong Kong (South China Morning Post, August 4, 2021).

Choy’s description is not completely inaccurate: the PTU has or had considerable potential power. But what this leaves out of the equation is the terrible role of the union’s bourgeois pan-democratic leadership which has always, consistently, acted as a bureaucratic and conservative brake on struggle, both as a trade union and as an influential force within the pan-democratic bloc (the parties that have traditionally dominated the democracy struggle in Hong Kong). The PTU leadership’s cowardice and incapacity to offer any organized fightback is on full display now, under the CCP’s ferocious attack, when the union has simply crumbled rather than even attempted to rally its members to participate in a defensive struggle.

The bourgeois pan-democratic leaders, of which the PTU leaders are typical, are not the fiery pro-democracy warriors portrayed by Chinese (and US) propaganda, but rather they are inveterate retreaters, who always seek to avoid struggle. The response of the PTU tops to this frontal assault on the union’s right to exist has dire implications for teachers and for the future of trade unions in Hong Kong, where the PTU will be seen as one of the biggest “dominoes to fall under the wheels of the CCP’s totalitarian counter-revolution”. This experience sharply, and with tragic immediate consequences, confirms the warnings of Marxists and genuine socialists that pro-capitalist parties led by petit bourgeois liberals and so-called moderates are incapable and unwilling to lead the necessary mass struggle for democratic rights, to defend existing rights against attacks, and to challenge a dictatorship that is supported by the big capitalists. A trade union led by such leaders is an “endangered species”.

Already before the PTU’s de-recognition and in common with other sections of the “moderate” pan-democratic bloc, its leaders backed away from any meaningful opposition role. Buckling under the regime’s pressure they changed course over the last year with the debatable claim to be, “keeping the union just as a union”. Last month, they quit the Hong Kong Alliance (full name: Hong Kong Alliance in Support of Patriotic Democratic Movements of China), a coalition of various pan-democratic parties and NGOs, which has always — until the bans of the last two years — hosted the annual June 4 Tiananmen massacre commemoration. The Alliance itself shows only token verbal resistance to the regime’s repression (its political make-up is identical to the PTU leadership), thereby conforming to a wider trend of capitulation among the official parties and groups of the democracy struggle — over 20 parties and groups have disbanded in the past 12 months.

The PTU leaders have effectively wound up the union during the past week as a force capable of standing up for teachers’ rights and resisting the government’s reactionary agenda. A key issue is the Xi regime’s determination to impose ultra-nationalistic “education” in the schools, in common with the rest of China. The PTU has announced the setting up of a working group to promote Chinese history and culture and foster “affection for home and country” among the union’s members and pupils. This u-turn, to appease the CCP’s propaganda and hope to deflect the “malignant tumour” accusation, will only demoralize the union’s base and alienate school students, the vast majority of whom detest the official CCP propaganda which masquerades as education. Far from being a “tactic” to win time and avert new attacks, this achieves the opposite: nobody in the government camp will be impressed by this shallow maneuver, while the many teachers who seriously abhor the authoritarian juggernaut will feel betrayed.

Furthermore, in a move to distance itself from basic trade union principles, the PTU announced its withdrawal from the Hong Kong Confederation of Trade unions (HKCTU), the main pro-democracy trade union centre, and to withdraw with immediate effect from Education International, the 32m-strong international teachers’ union body. The HKCTU leadership, another pan-democratic grouping, said the decision of the PTU, the confederation’s biggest affiliate by a wide margin, to leave, was “understandable”. As long as the CCP regime faces such “opposition” its crackdown will be “unstoppable” and trade unionism imperiled.

The attack on the PTU should be seen in a wider context: the whole education sector is a key battleground of the anti-democratic counter-revolution. Saluting the flag of China and “patriotic education”, the Chinese newspeak expression for school brainwashing is in full swing. In “patriotic education” classes, the great famine of 1958 to 1962 (Great Leap Forward), the 1989 Tiananmen Square massacre or the prison camps in Xinjiang and cultural genocide of the Uighurs do not exist and have never happened.

The Chinese dictatorship fears the role of youth in mass protests and mistakenly believes it can prevent this by cramming the schools full of propaganda. 2,500 of the over 10,000 people arrested for participating in the 2019 protests, a quarter of the total, were under 18-years-old. The PTU’s capitulation on this question will have widespread repercussions beyond the union’s membership, especially among the younger generation who are in danger of being swept along by terroristic moods, which represent a dangerous blind alley as far as struggle is concerned.

Long before the crackdown on the PTU, teachers have been spied upon, their social media posts monitored. A poll in May showed that 40 percent of Hong Kong teachers want to quit the sector completely. This trend will accelerate following the PTU’s capitulation. Moreover, smaller teachers’ organizations, including a rank-and-file opposition group within the PTU, have already disbanded themselves due to fears of repression.

If the PTU leaders had refused to capitulate and instead called their members to mass meetings to discuss the People’s Daily attack on the union as a “tumor”, this could just feasibly have forced the counter-revolution to take a step back. Even the super-elastic and catchall national security law would have been hard-pressed to invent a new crime of protesting against being labelled a “tumor”. This could have been used as a rallying point to wage a basic defense of the PTU and trade unionism in general. Instead, the leaders capitulated, reinforcing the idea that the counter-revolution and the CCP’s political crackdown is unstoppable.

SARCHK (Solidarity Against Repression in China and Hong Kong) and ISA warned repeatedly that the ongoing counter-revolution would spread to the trade unions. It is likely that political strikes will be banned, and on this basis any strike can be banned in future. The dictatorship’s aim is full “mainlandization” which means no unions, no strike rights and a reign of terror in the workplaces.

In Hong Kong and in China, class issues, trade union issues and democratic issues are all inseparably connected. The trade unions are attacked because these are potentially the most powerful weapons in the struggle against dictatorship, as shown in South Africa, South Korea and almost every democracy struggle in history. The working class is the most consistently democratic and revolutionary class — always — despite massive propaganda (from both bourgeois and Stalinist politicians) to the effect that the capitalist class or “middle classes” are the main agents of democratic change.

In Hong Kong the pan-democrats do not represent the capitalist class, which is completely integrated into the CCP’s system of rule. The liberal pan-democrats could at the very most be classed as “wannabes” who wish to represent the capitalist class, a class and economic system they fear and never question. But wishing for something does not make it a fact. For socialists, this is a crucial point to distinguish between the role of the real capitalist forces, which wholeheartedly back the repression and dictatorship, and the “wannabe” representatives of a democratic capitalism that doesn’t and is unlikely ever to exist.

SARCHK and ISA are calling on the workers’ and trade union movement to sound the alarm and show solidarity against the regime’s brutal attack on trade unions, including Hong Kong’s teachers who have now been abandoned in brutal fashion by the bureaucratic leadership of their former union. Lessons must be learned: capitulation is not a tactic or a strategy, it is game over! We urge workers internationally to support solidarity campaigns with those fighting for genuinely independent trade unions and democratic rights for workers in Hong Kong and China.

Chinese Capitalism and the Climate Crisis