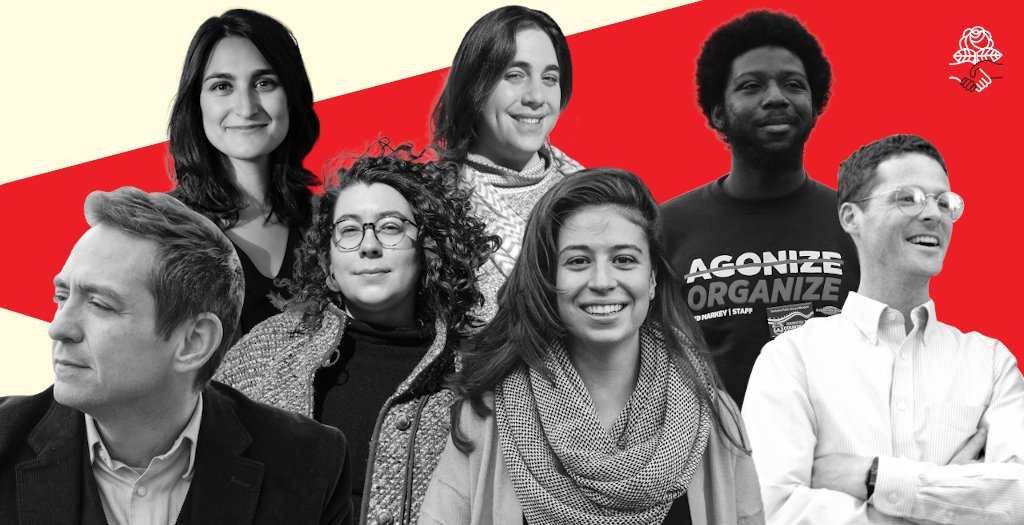 Boston Democratic Socialists of America has endorsed seven candidates for Somerville City Council in an attempt to win the first DSA-majority city council in the country. This is an incredibly exciting development in the midst of the re-emergence of socialist ideas nationally, the growth of DSA to nearly 100k members, and is a response to the failure of the Democratic establishment to provide for working people in Somerville and the greater Boston area.

The government’s criminal negligence in the handling of the COVID-19 pandemic has made abundantly clear the dire need for a bold socialist program as an alternative to the priorities of the Democratic establishment, who cater to the wishes of their big business donors. But how socialists should use elected office remains a key question on the left particularly with the Squad failing to take on Biden and the Democratic Party establishment in a meaningful way over issues such as Medicare for All, a $15 minimum wage, corporate tax rates, and the infrastructure package. It’s against this backdrop that the importance of a majority socialist city council in Somerville could take shape, and Socialist Alternative is excited for the opportunity to engage with the candidates’ campaigns.

Somerville has become increasingly unaffordable for working people as corporate developers infiltrate the city’s housing markets, making gigantic profits while pushing out long term residents. While city hall proudly displays their Pride and Black Lives Matter flags, inside there remains the question of whether our representatives are committed to improving the material conditions of those living and working here. While Joe Curtatone, Somerville’s mayor, often pretends to be on the side of working people, his allegiance has always been with corporate and developer interests in the city.

Our Revolution (OR), formed in the wake of Bernie Sanders’ 2016 defeat, took off in Somerville where the organization ran a slate of 5 candidates for City Council in 2017 and endorsed 4 incumbents. All 9 candidates won their races out of the 11-person Council. Progressives being elected can often have an effect of increasing confidence for working people to fight for more, and this was shown in Somerville with the 2018 fight for a transfer fee on corporate landlords and developers to fund affordable housing. Unfortunately, after it passed in the city and went to the State House for approval (since municipal transfer fees need state approval in Massachusetts), the OR councilors failed to use their positions to build a movement to pressure the Democrat majority state legislature. Socialist Alternative argued at the time that the “home rule petition” would be “dormant on arrival” at the State House, which was unfortunately what happened, and that a strong movement was needed for it to pass.

While some of the OR councilors attend local demonstrations and protests, which is positive and more than can be said for most elected officials, a real movement building approach would mean using their offices as a megaphone for social movements and the class struggle, mobilizing to demonstrations and organizing them themselves.

In 2020, Somerville’s paraprofessionals won a historic 25% raise but only through a year-long all-out mobilization of the Somerville Educators Union, and the community at local meetings and in the streets fighting for black lives. Appealing for a living wage and job security, the paras, many of whom are women of color, weren’t even allowed to speak as non-Somerville residents at city hall during School Committee meetings because their monthly salary could not afford them the ability to live in the city! Meanwhile, city hall continually welcomes out of town corporate landlords to say their piece during hearings whenever they please. Too often, this is what Somerville has meant by Black Lives Matter: symbolic gestures with no real backing.

Unfortunately, the Our Revolution Somerville city councilors have not used their offices to  expose the local and statewide Democratic Party establishment in any meaningful way.

The prospect of a socialist takeover of the city council is really exciting and would be a real positive development if the candidates are able to win. JT Scott and Ben Ewen-Campen are incumbents running in Ward 2 and 3 respectively. Tessa Bridge will run in Ward 5 and Becca Miller in Ward 7. Charlotte Kelly and Willie Burnley Jr, two co-founders of Defund SPD, will run along with Eve Seitchik as at-large candidates.

This year’s elections are taking place on the heels of explosive Black Lives Matter revolts last year and the twin COVID and economic crises. Many of the DSA candidates openly identify as socialists, something that even a few years ago would seem unthinkable. While there are some similarities to the 2017 Our Revolution slate, many of the candidates running as part of the DSA slate have clearly stronger platforms and more of a connection to recent social movements.

It remains unclear, however, what most of the candidates consider socialism to be. While Eve, Becca, Charlotte and Tessa identify as socialists or having “socialist values,” only Eve has a section in their platform pointing towards building the socialist movement. Even the Boston Globe was quick to point out, “The newly endorsed candidates define socialism as supporting a broad range of progressive but not particularly extreme policies, from increasing tenant protections and bringing the energy grid under municipal control to limiting the police budget and investing in community land trusts. For a leftist electorate, these are solidly mainstream positions.” Socialists running for office should use their campaigns to raise the sights of working people for what’s possible, and be honest about the only realistic way to achieve it, mass movements and working class action.

Additionally uncertain is where the candidates stand on important issues like decreasing the police budget, with some candidates not even mentioning it, some not committing to even a 10% cut while only one candidate, Eve, calls for cutting the police budget by 60%. Given the runaway affordability crisis in housing, Eve and Becca calling for rent control is important and this is something we think the other candidates should also take up in their platforms. Many of the candidates also call for the very popular Green New Deal for Somerville, but not all specify what this would mean. It is crucial that fighting for free public transit and investment in “green” infrastructure be accompanied by the call to tax corporations and the super-rich so that working people understand they are not on the hook. Demands like rent control and taxing the rich appear on the proposed platform of the upcoming DSA National Convention, and we’d encourage the candidates to explicitly take them up as well.

Adopting a movement building strategy as part of the campaign can begin right away and carry over into office if elected. One way to take a powerful step in this direction would be for the socialist slate to work together to organize a rally to cut the police budget and tax corporate developers to fund affordable housing, calling on organizations like DSA, Socialist Alternative, Defund SPD, and local unions to join. This could mobilize many in the community and point the way forward for how their platforms can be achieved if elected. Importantly, Eve has also hosted a session with DSA members to democratically provide feedback and help shape their messaging and platform. DSA leadership and the other candidates should mobilize members, many of whom are Somerville residents, and the wider community for their thoughts on the platforms as well. This would be an important step toward accountability, which is also a crucial component of socialist electoral campaigns.

Out of all the candidates, Eve’s campaign points most strongly in the direction of what’s needed, and Socialist Alternative recently voted to endorse them! While all the other candidates have chosen to run as Democrats, a party that favors big business and the rich over the interests of working people, Eve is running as an independent. We agree with their campaign literature which states, “We need an independent alternative to a political establishment that has split the difference for too long between what’s good for big developers and what’s good for our neighbors.” It is more necessary now than ever to concretely work towards building a new party of, by, and for working people.

Beyond just their platform, showing in practice the need for a political alternative to the Democratic Party will require Eve resisting the norms of behind-closed-doors negotiations, and publicly exposing whenever the Democratic establishment betrays working class interests. If others on even the progressive wing of the council make the mistake of giving cover to the establishment’s approach, as we have unfortunately seen the Squad do nationally, Eve will need to maintain their independent position.

Eve’s call to cut the police budget by 60% and upfront support of rent control are something we think all candidates should adopt. Additionally, Eve embraces the idea of movement-based politics over lobbying politicians to win meaningful gains for working people. Accountability to their socialist organization is a top consideration, with their stated plan to work closely with Boston and Somerville DSA to arrive at decisions through democratic discussion and debate. We believe this is a great step towards how socialists should use their elected office and could point the way forward towards an independent workers party in the future. There will be pressure on Eve if they’re elected to not do this, or to stop doing it after a short while, and this pressure will need to be withstood. DSA has an important role to play in this and discussions should be held now on how to concretely hold their elected officials accountable to working class interests if they are elected.

Socialist Alternative members have knocked doors and held several “tabling” sessions for the campaign across the community where we’ve been able to talk directly with Somerville residents about the issues we’re facing and the upcoming elections. Many people in particular are fed up with the inflated rent prices and have expressed a desire to fight for affordable housing and rent control by supporting and getting involved with Eve’s campaign.

It is incredibly exciting that the wave of socialist and socialist-identifying election campaigns has come to Somerville, and they have the potential to be a pole of attraction for progressive minded working and young people all across the Greater Boston area. Strengthening the candidates’ platforms and being crystal clear that the only way to win concrete victories for working people is social movements and class struggle will help draw in people that have been historically let down by establishment politics and build the socialist movement. Socialist Alternative is excited to be part of that effort!