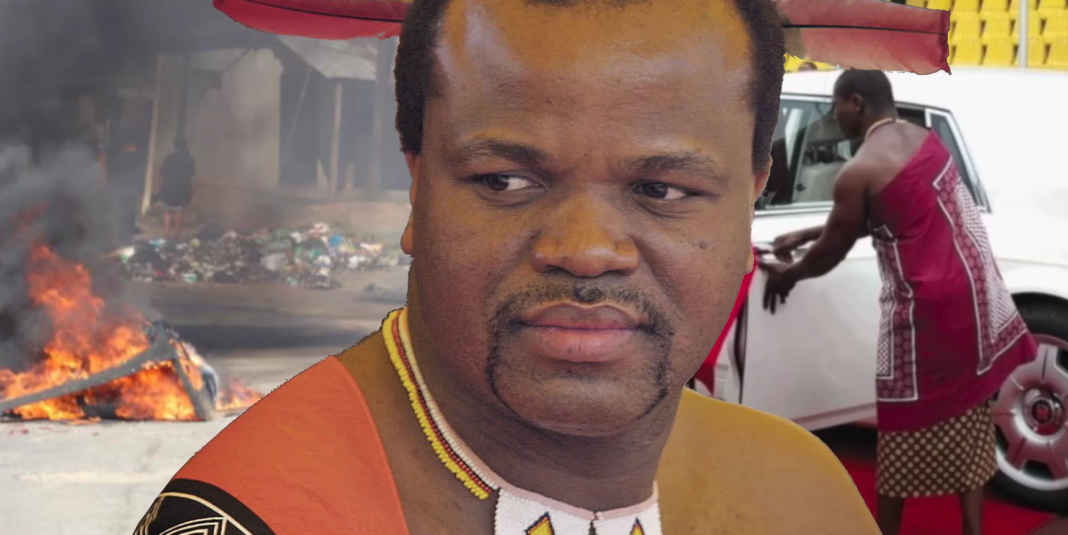 The end of June brought with it reports that Africa’s last absolute ruler had fled his kingdom of eSwatini, formerly known as Swaziland, in the face of mass uprisings. Although this act was later denied by the government, the fact remained that the monarchy was undergoing its most serious challenge yet in its 53-year independence from colonial rule. This comes at a time of building class tension and follows a pattern of increasing unrest in sub-Saharan Africa.

Wedged between South Africa and Mozambique, the landlocked kingdom of eSwatini sits as Africa’s last remaining absolute monarchy. Its ruler, King Mswati III, has no reservations in using this status to sport a lavish lifestyle of state-funded luxury cars, palaces, and an annual household budget of more than R870 million, approximately 50 million euros. Meanwhile about 60% of the 1,2 million population live below the national poverty line, surviving off less than R27, 1.60 euros, per day. Like its neighbors, eSwatini is among the world’s most unequal societies with the vast majority of the wealth held only by very few. Economic inequality, underdevelopment and suppression of democratic rights are among the many difficulties faced by the working class of eSwatini .

Political power of the king over the country is enshrined into his position. As king he has the ability to ban political parties, appoint the prime minister and a significant portion of parliament, and veto any laws passed — making the legislative body a symbolic shell. This power also extends deep into the economy with Mswati controlling an extensive portion of the eSwatini economy through his Tibiyo Taka Ngwane wealth fund.

In contrast to the state propaganda of contented royal subjects, the Swatis have a long history of mass resistance to the dictatorship. Tensions have continued to grow during the pandemic. A boiling point was reached at the end of June when the monarchy and government of eSwatini banned the people from delivering petitions in the fight for democratic reforms. This sparked a revolt in the country.

The peaceful pro-democracy protests that began on June 20 turned violent after June 25 as thousands took to the streets. The government unleashed state forces to quell the uprising after businesses belonging to the royal family were looted, reportedly using live ammunition on the people. The National Commissioner of Police William Dlamini excused this action because the situation was “war”. Videos on social media show police and soldiers dragging suspected protestors out of their homes and beating them. Over 40 casualties have been reported since the start of the protests and more than 1000 arrests. In the wake of the mass uprising, the government shut down the internet in the country and reports indicated that the king had fled the country, which the government denies. This uprising shows that the tensions between the monarchy and the masses are at an all-time high.

Part of an international wave of revolt

The decade that has followed a wave of revolutionary uprisings in the north of Africa has seen numerous significant revolts led by militant layers of the working class and youth across Sub-Saharan Africa. The Marikana strike in 2012 was a watershed moment in South Africa’s history. The massacre was the only way to break up the strike and to demoralize the working class against further uprisings. However, in 2015, the #FeesMustFall movement led by university students was a loud message of defiance to the ruling class. Similarly, in 2016 the masses of Zimbabwe rose amid brutal repression against the regime of Robert Mugabe. Unfortunately, Mugabe’s party Zanu PF remained in power and the repression continued. More uprisings have taken place since then, for example in 2018 when the Zimbabwean masses rose in defiance against price hikes, particularly increases in the price of fuel. In that same year, the people of Sudan led a revolt against an unjust regime that led to the overthrow of the country’s president Omar al-Bashir. We have also witnessed in Nigeria over the past few years the build-up of mass protests against the corrupt and abusive Special Anti-Robbery Squad. This led to nationwide protests last October in which predominantly young Nigerians across the country came out in protest to demand accountability and democratic community control over the police.

It is clear that many people across Africa know they cannot passively wait for things to get better. The people’s revolt in eSwatini arrives at a time when many Africans no longer tolerate unjust regimes. The failures of capitalism are leading the masses onto the streets in protest. Neoliberal approaches to supporting capitalism, particularly in the neo-colonial world have been a disaster for the majority of people. Living conditions for the masses betray the failed promises of capitalism and the leaders who support it. Therefore, it is important to turn to socialism as an alternative to capitalism. A socialist system with an internationalist approach can adequately address the problems faced by the masses.

No freedom under capitalism

We must acknowledge that the mere abolition of the monarchy in eSwatini will not end the suffering of the people. Any political democratic reforms that do not include a democratic overhaul of the eSwatini economy and a redistribution of wealth will see power merely transferred to a new elite capitalist class who will rush to fill the power vacuum. As long as capitalism is maintained, we will still see the continued exploitation of the many for the benefit of the few.

The people of eSwatini cannot rely on help to come from above either. Opposition and civil rights groups have called on organizations such as the Southern African Development Community (SADC), African Union (AU), or the United Nations (UN) to intervene. Even if these organizations (which are themselves composed of oppressive states) were to force Mswati to step down, such action would only serve to take power away from the working class and hand it over to the new regime that would be built in their own neoliberal image. The honeymoon of a new “democratic” eSwatini would be short-lived as the assets of the former king’s wealth fund, including mines, agriculture and real estate, would be sold off to the private sector instead of taken under democratic public control.

Neither can the masses rely on PUDEMO or the Swaziland Communist Party, who like the ANC and the SACP in South Africa, are unfortunately incapable of giving the correct leadership, strategy and program. In fact, without the industrial base as the ANC has had in South Africa, PUDEMO may be in a position far worse than the ANC. It will not be able to guarantee any “stable democratic regime”, as any government will immediately come into conflict with the social aspirations of the same working class that is today fighting the royalist dictatorship of Mswati and his backward semi-feudal, colonial capitalist regime. eSwatini’s fate itself is strongly linked with the working class of South Africa — its economy is entirely dependent on SA: 90% of imports come from South Africa, and 70% of its exports end up in South Africa. In addition to this, eSwatini’s currency (the lilangeni) is tied to South Africa’s Rand.

We therefore see how important it is for any successful movement to establish international solidarity across its borders. The South African working class itself has a key role to play in actively backing up the Swati uprising, with solidarity strikes and blockades and with serious discussions on the lessons of 27 years of democratic capitalist rule — the coming revolution must be working class led, socialist, and international.

It is critical for the working class of eSwatini to take its future into its own hands. Violence from the brutal crackdown must be defended against by organizing community defense committees. Workers across the economy must also organize into a mass general strike. This will have the effect of diminishing Mswati’s political power, as well as the value of his assets that are tied to the economy. From this the working class can demand not just the king’s resignation, but the placement of his extensive economic assets under democratic workers’ control for the benefit of the people. Going forward, a true democratic revolution in eSwatini will only succeed on the basis of an organized mass working class movement, with a genuine revolutionary party at the head of it, and armed with a socialist program and internationalist perspectives for an all Southern African revolution.