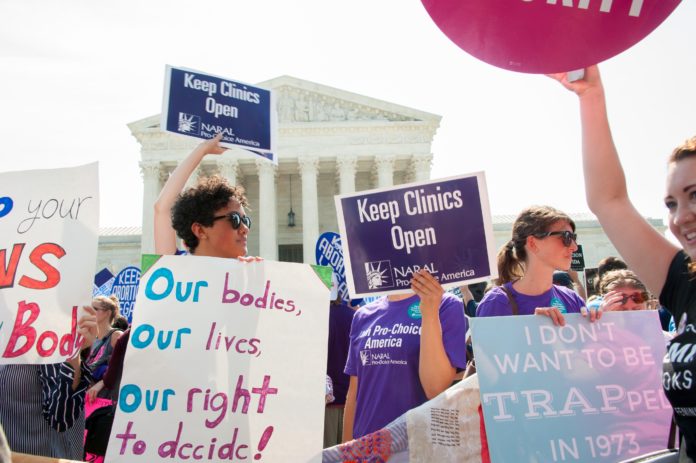 Texas, the same state whose restrictive abortion law was struck down in Roe v. Wade in 1973, is now facing one of the worst attacks on abortion rights yet. The “heartbeat” bill, signed in May by Governor Greg Abbott, is set to take effect in September. It bans abortion as early as six weeks into a pregnancy, with no exceptions for instances of sexual assault and incest.

The law is unique in that it allows any private citizen to take legal action against abortion providers or anyone who assists in an abortion after the fetal heartbeat has been detected. The already scarce abortion providers will have to take up the financial burden of endless litigation to defend against these suits. This is an absurd breach of medical privacy and only adds to the difficult struggle to get an abortion in Texas.

In Texas, 1.7 million women live in “reproductive deserts,” with the closest abortion clinic being hours away. Over 50 reproductive clinics have closed in the last few years, many in poor and rural areas where working women and teens don’t have the financial ability to travel far distances for the proper care. Texas’ draconian law mandates two trips to the clinic before an abortion, with distances averaging well over 200 miles.

This situation leaves working class families with the financial burden of children they may have difficulty taking care of, makes working class women more likely to resort to unsafe abortion practices, limits access to proper medical care should something go wrong in the pregnancy, and leaves many vulerable to the emotional burden of carrying a baby to term that was the result of sexual assault. It also threatens the sexual health and safety of working people, as many reproductive clinics are often the only places that will provide contraceptives, OB-GYN screenings, and STD screenings. The Texas fetal heartbeat bill is just one illustration of the war on reproductive rights across the county.

The Supreme Court and Abortion

Trump’s presidency heightened concern around the fate of Roe v. Wade, which guarantees the right to an abortion before fetus viability (the point at which the fetus can live outside of the womb, which the court estimated at 23-24 weeks).  Trump appointed three conservative Supreme Court justices during his term, leaving the court at a 6-3 conservative majority. The court has said they will hear a case out of Mississippi, Dobbs v. Jackson Women’s Health Organization, which would ban abortion after 15 weeks, well before the 23 week mark currently protected under Roe. This means that the Supreme Court has the chance to scale Roe v. Wade back or potentially repeal it entirely; deliberations will likely start in the fall, meaning a decision in the spring.

While repealing it entirely could very likely open the door to another wave of mass protest which the ruling class wants to avoid, the right-wing strategy is to scale back Roe v. Wade’s jurisdiction in such a way that empowers right-wing leaders at the state level to severely restrict legal abortions. So instead of the court ruling there is no constitutional protection of abortion before 23 weeks, they could say that sometimes, in some scenarios, the right is constitutionally protected.

This would open the floodgates for states to mercilessly test the limits of the ruling.  A number of “trigger bills” have already passed in states, which would immediately go into effect and criminalize abortion if Roe v. Wade is weakened. Many of these bills are fetal heartbeat bills, making abortion illegal after six weeks of conception, which is commonly when the first heartbeat begins in the fetus. Over 380 anti-abortion provisions have been introduced in 43 states this year alone. For example, Arkansas and Oklahoma have enacted near-total abortion bans, and Montana banned the procedure at 20 weeks.

How to Fight Back: We Need a Socialist Feminist Movement

Women are continually oppressed under capitalism,and this worsened as we saw increase even more during the crisis of the pandemic. With children stuck at home and childcare becoming an increasing problem for families who can’t afford it, women are being shoved out of the workforce. Birth rates have declined by 20 percent in the past decade largely because women and families can’t afford the costs of childcare, exemplified in the number of homeless children in the United States, which reached an alarming high of at least 1.5 million in 2017-2018. Denying women the right to an abortion and reproductive healthcare exacerbates all of these issues and leaves working women even more vulnerable to emotional, financial, and health complications in life.

The fact is that nearly one in four women in America will have an abortion in their lifetime, so what we are discussing is not whether abortion will happen or not, but whether the law will allow for safe abortions to take place. Before legal and safe abortions, one in six pregnancy-related deaths were caused by unsafe abortions due to the practice being outlawed.

The most recent attacks on abortion rights come at the same time as a series of anti-trans bills and attacks on voting rights that disproportionately target Black voters. These fights and many more are all representative of capitalism’s structural reliance on oppression. We need a mass movement like we saw in the 70s that won Roe v. Wade under a Republican presidency and conservative Supreme Court. This means getting organized now with democratic planning meetings, occupying legislative buildings where anti-abortion measures are being passed, and coordinating days of action to fight this legislation. We must also be uniting movements that will win gains for all working people including, among many other things, trans-inclusive Medicare for All; free, safe, and legal abortion; free child care; voting rights for all; and a living wage for all people. All of this will require putting immense pressure on the Democrats in power who are hiding behind Republican obstructionism to avoid doing anything. We need a movement that will appeal to unions and labor for support, not wait around for inactive politicians, and take to the streets to make the demands for what we need.